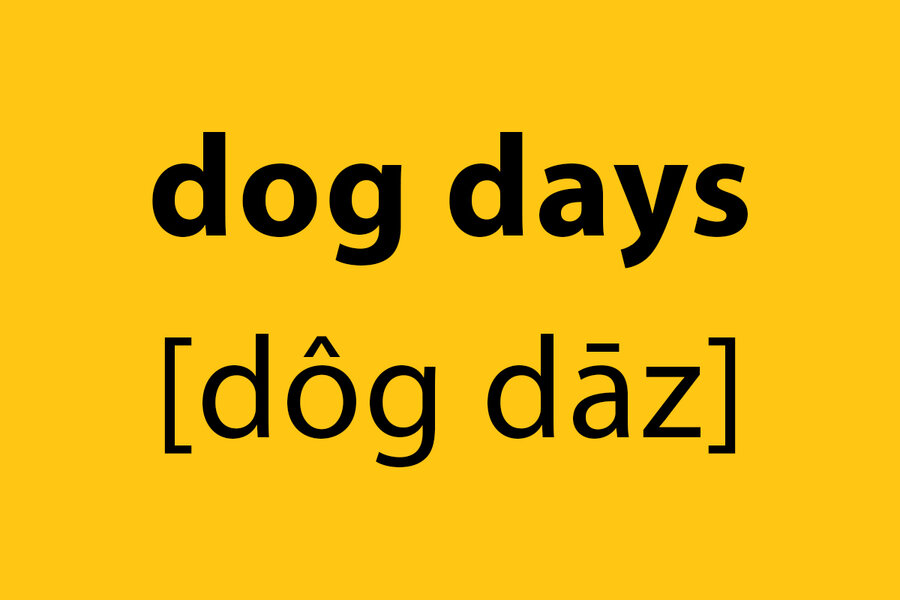 We’re in the dog days of summer, at least where I live in Massachusetts. It’s over 90 degrees and humid – plants and joggers are wilting, cats are stretched out as far as they can go, and dogs are sprawled on porches, panting in the heat. This is what the phrase evokes, and I had always assumed, where it originated.

It turns out that the dog days do get their name from a canine, just not the kind I’d thought.

The dog days are “the period between early July and early September when the hot sultry weather of summer usually occurs in the northern hemisphere,” according to Merriam-Webster, or, more broadly, any “period of stagnation or inactivity.” The term comes from a celestial dog, not a porch-napping one – Sirius, the Dog Star, the brightest star in the night sky.

Sirius is part of the constellation Canis Major, the Greater Dog, near Orion’s belt. According to Greek and Roman mythology, Canis Major represents one of Orion’s hunting dogs, eternally chasing after Lepus, the rabbit, nearby. Sirius is visible in the night sky from December to March in the Northern Hemisphere. In July and August, however, it appears to rise with the sun, shining so brightly that on rare occasions it can even be seen during the day. This extra “sun” was thought to be responsible for the scorching heat of mid- to late summer.

Ancient Greeks referred to the oppressive period as hemerai kynades, literally “dog days”; in Latin they were the dies caniculares, because Sirius was also called Canicula, “the small dog.” In English they were first known as canicular days after the Latin, but by the 16th century had assumed their present form.

To the ancients, Sirius was thought to bring not just heat, but trouble. Droughts and sudden thunderstorms could damage crops, dogs were more likely to become rabid, and it was inauspicious to begin a journey or other large undertaking. The Greek poet Homer brings out this menacing sense in the “Iliad,” when he likens the vengeful Achilles to the Dog Star (in A.S. Kline’s translation): “racing over the plain, his bronze breastplate gleaming like Sirius, the star of harvest, brightest of stars in the dark of night. Orion’s Dog, men call it, glittering brightly yet boding ill, bringing fever to wretched mortals.” As you probably know, things don’t work out well for Troy.

Dog days had similarly ominous connotations in English until the Protestant Reformation. Eventually they lost their association with ill fortune.

Now the term is simply evocative of lazy, soporific summer days, when it seems too hot to move except to drink a cold glass of lemonade – when the Dog Star is high in the day-lit sky, and smaller dogs are panting on the porch.