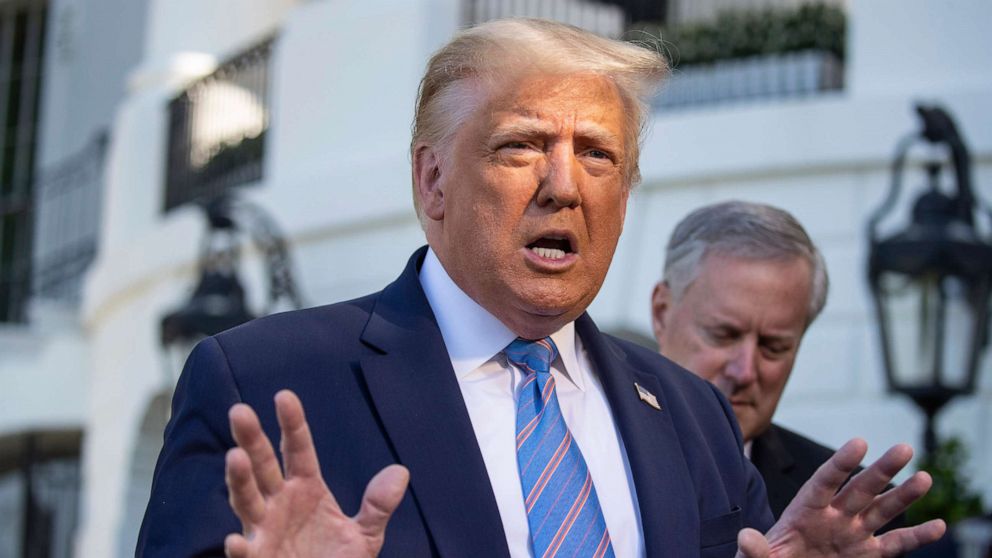 After drawing praise last week for a more measured tone in discussing the coronavirus — extolling masks and social distancing, after repeatedly dismissing COVID-19 for months — President Donald Trump this week reverted to pushing an unproven treatment against the advice of top health experts and the Food and Drug Administration.

Though the president has long expressed his support for hydroxychloroquine, and has even said he has personally taken it based on his unproven belief that the drug is effective in preventing COVID-19, he had largely stopped publicly promoting the drug in recent months as other treatments, like the drug remdesvir, have proven effective.

The Food and Drug Administration in April revoked an emergency authorization it had issued for the drug to be used to treat the coronavirus, and warning of the risk of heart problems. Large, randomized trials also showed no benefit for coronavirus patients.

But the president switched back to espousing the drug’s promise Monday night by retweeting a video of a doctor who made the unsubstantiated claims that hydroxychloroquine is a cure for the virus and also dismissed the efficacy of masks. Twitter has since removed the video showing a press conference because the company said it violated its COVID-19 misinformation policy. It was also removed from other social media platforms.

Trump returned to his old ways even as they have resulted in disastrous poll numbers for him, just months before voters decide whether to grant him a second term. Two-thirds of Americans in a recent ABC News/Washington Post poll said they disapproved of how he has handled the pandemic.

Amid this backdrop, Vice President Mike Pence on Tuesday evening met at the White House with four doctors who appeared at the press conference shown in the video, according to the head of a conservative group that attended the meeting.

The doctors met with Pence in the West Wing, across from the Oval Office, around the same time Trump extolled the virtues of hydroxychloroquine at his own news conference down the hall, according to Jenny Beth Martin, the president of the Tea Party Patriots Foundation.

Martin, who said she attended the meeting, too, told ABC News that the doctors “talked a good deal about hydroxychloroquine” as a treatment for COVID-19 and that Pence “seemed receptive to it.”

Pence’s office did not respond to a request for comment about the meeting.

The president has since vigorously defended his retweet of the video of the doctor’s press conference, which took place outside the Supreme Court on Monday, and he revived his endorsement of hydroxychloroquine as a treatment for COVID-19, saying, “I happen to believe in it.”

“It’s safe,” he said during a press conference Tuesday, invoking his own two-week regimen of the drug. “It doesn’t cause problems. I had no problem. I had absolutely no problem, felt no different. Didn’t feel good, bad or indifferent. I — and I tested, as you know. It didn’t — it didn’t get me, and it’s not going to hopefully hurt anybody.”

But the president’s claim that the drug doesn’t cause problems is disputed by the FDA, among other health authorities.

“Hydroxychloroquine and chloroquine have not been shown to be safe and effective for treating or preventing COVID-19,” the agency said on April 24, warning that the drugs could lead to sudden cardiac death. It has warned of the risk of “serious heart rhythm problems and other safety issues, including blood and lymph system disorders, kidney injuries, and liver problems and failure.”

Dr. Anthony Fauci, the nation’s leading infectious disease expert, told ABC News Chief Anchor George Stephanopoulos in an interview on “Good Morning America” Tuesday that he stood by the FDA’s position and that the overwhelming prevailing clinical trials have indicated that “it is not effective.”

The president has also defended the doctor who makes unsubstantiated claims about the drug in the video he retweeted, telling reporters on Wednesday morning he was “very impressed by her” and that she is part of a group of doctors who “swear by it” and “think it’s great.”

The president decried Twitter’s removal of the video, which he suggested was actually a reflection of political bias, not acknowledging that the video contained false information.

“I know nothing about her, have never seen her before, but certainly you can put her up and let her have the voice, so what they did is they took down her voice,” he said outside the White House Wednesday. “Now, they seem to never take down the other side, they only take down conservative voices.”

Some Trump aides had been encouraged by the president’s switch to a more somber tone and promotion of mask wearing, but they were cautious about it lasting.

Aides on the president’s re-election campaign had been hoping the president would stay on track, even for just a few days a week, but were not surprised when he reverted back off message.

His newly installed campaign manager, Bill Stepien, said earlier this month at his first all-staff meeting that campaign staffers needed to win more days than they lost if they’re going to win in November, a mantra some aides have applied to the president’s own behavior.

ABC News’ Will Steakin contributed to this report.