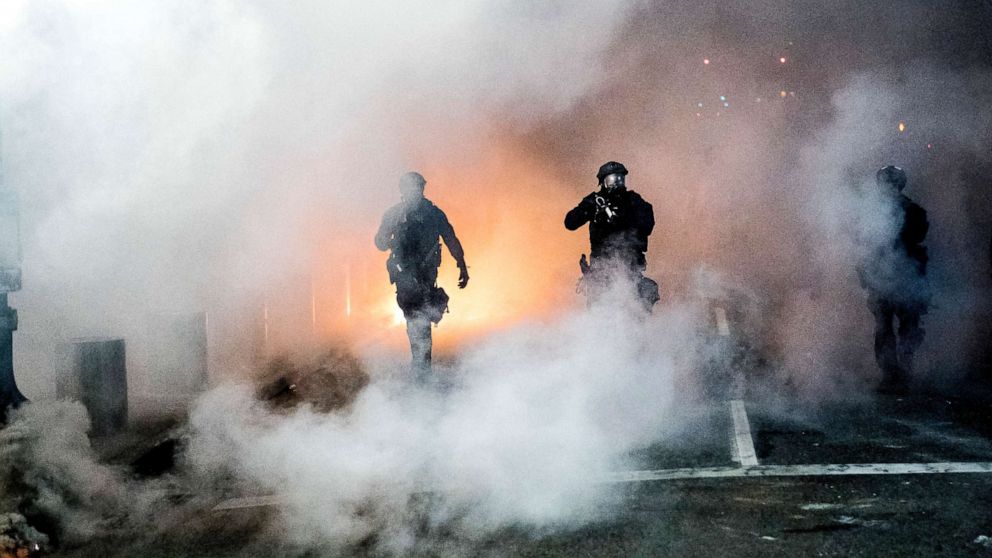 In the immediate aftermath of George Floyd’s death in May, Portland Police Chief Jami Resch issued a statement she had hoped would help keep a lid on rising tensions in her city by condemning the fatal police encounter in Minneapolis as running “contrary to our fundamental duty to protect and serve.”

Two months after making the statement, Resch is no longer the top cop, having resigned in June and replaced by a Black police lieutenant, and Oregon’s largest city has become the nation’s major flashpoint for protests and violent clashes with law enforcement officers.

In addition to being a rallying point for a continued protest movement, Portland has also become for some a symbol, as Seattle’s Capitol Hill Organized Protest zone (or CHOP, for short) was before it, of liberal cities out of control, besieged by crime and lawlessness.

The images of people in the streets, fires burning and clashes with law enforcement have become wallpaper in some circles and were seized on by the Trump administration as a reason to step in, as the president has threatened to do in Chicago and elsewhere.

Some demonstrators say Trump’s deployment of federal agents in camouflage and their aggressive tactics, including the use of tear gas and scooping up protesters in unmarked vans, has fueled the unrest and bolstered the resolve of some protesters to take a more militant stance.

In any event, a divide has emerged in Portland between those who are looking to peacefully protest police brutality and call for police reform and those looking to foment chaos and violence. And whereas other cities, such as New York, which saw large protests, attacks on police officers, looting and vandalism in the wake of Floyd’s death, have managed to stabilize the situation, Portland has not.

In a response on Thursday, Trump tweeted that Brown “isn’t doing her job.”

“She must clear out, and in some cases arrest, the Anarchists & Agitators in Portland,” Trump said in his tweet. “If she can’t do it, the Federal Government will do it for her. We will not be leaving until there is safety!”

Here’s what we know about the situation in Portland:

On Wednesday night, the 62nd consecutive day of demonstrations in Portland, protesters clashed once again with federal agents guarding the Mark O. Hatfield U.S. Courthouse, which has become a focal point of the civil unrest. Around 11 p.m., federal agents in riot gear fired tear gas and stun grenades at protesters attempting to breach a fence around the courthouse after agents warned them to disperse. Several arrests were made as the standoff continued into Thursday morning.

The clashes came hours after Brown, a Democrat, announced on Twitter that she had spoken with Vice President Mike Pence and an agreement to withdrawal federal agents from the city was struck provided that local officials could assure that federal buildings would be protected — the primary reason agents from Customs and Border Protection and the Federal Protective Service were dispatched.

But in a warning to Brown and other local officials, Chad Wolf, acting secretary of the Department of Homeland Security, said federal agents would remain in the city until it is clear that state troopers and Portland police have gotten a handle on the violence.

Federal officials, including Attorney General William Barr, have defended the presence and tactics of the agents saying they were needed to prevent the spread of “violent attacks on federal courts.”

Brown agreed to deploy state troopers to Portland if federal agents would move out, and troopers were set to take over those duties Thursday afternoon, according to Oregon Live.

Whether the move to withdraw federal agents will help de-escalate violence in Portland still remains uncertain.

Split in approach to protest

In recent days as vandalism, attacks on police and fires ignited in the streets have increased, protesters have become split between those bent on destruction and those who believe the peaceful actions of the Black Lives Matter movement are being drowned out by demonstrators and agitators pushing violence as a means to achieving their goals.

On Tuesday night, the difference in philosophy played out in the streets of Portland when a white protester dressed in riot gear set a sizable fire in the middle of a street. A Black Lives Matter protester, who identified himself to ABC News as Najee, ran over and put the blaze out in an incident caught on video.

The white protester in full riot gear responded by yelling, “light the fire again!” A frustrated Najee yelled back, trying to explain that inciting violence and destruction was taking away from the BLM message.

The white protester responded, “they burned down one police building in Minneapolis and they defunded the police department.”

E.D. Mondaine, president of the Portland NAACP branch, wrote in an opinion piece in the Washington Post last week that as the demonstrations have continued daily in Portland since Floyd’s death on May 25, “many people with their own agendas are co-opting, and distracting attention from, what should be our central concern: the Black Lives Matter movement.”

Mondaine said even the so-called Wall of Moms, a group of mostly white women who have turned out in large numbers in Portland to protest police brutality and form an arm-to-arm barrier between the protesters and the federal agents, could be hurting the overall goal of the BLM movement.

“This might ease the consciences of white, affluent women who have previously been silent in the face of Black oppression, but it’s fair to ask: Are they really furthering the cause of justice, or is this another example of white co-optation?” Mondaine wrote.

But Bev Barnum, a mother of two teenagers, said she was motivated to organize the “Wall of Moms” on Facebook out of motherly instinct, not a political agenda.

“As soon as you become a mom, something is triggered in you. It’s primal,” Barnum said in an interview with ABC’s “Good Morning America.” “It doesn’t matter if it’s your kid or not, you’re going to help them. If you see a kid drowning, you’re going to jump into the water.

Portland, where Blacks comprise just 6% of the population, erupted in violent protests just three days after video surfaced of a white police officer digging his knee into the back of Floyd’s neck as he repeatedly yelled “I can’t breathe” and called out for his dead mother before falling unconscious and later dying in a hospital.

A May 28 vigil for Floyd in Portland took a destructive turn when a small group splintered off from a protest march, broke into a juvenile detention center and set it on fire. Several businesses, including an Apple Store, were looted, prompting police to declare a riot.

The following day, Portland Mayor Ted Wheeler declared a state of emergency and announced a citywide 8 p.m. curfew. But as the first night of the curfew approached, more businesses were looted and fires were set. Police deployed tear gas and ended up arresting 51 people for disorderly conduct.

But Brown refused to send the National Guard despite Williams informing her that there were “organized efforts” intent on creating chaos.

Amidst the turmoil, Resch, the police chief at the time, resigned just days after local activists criticized her for having an all-white command staff. She was replaced in June by Chuck Lovell, a Black veteran lieutenant of the police department whom Resch endorsed as “the exact right person at the exact right moment.”

A day after Lovell became chief, a U.S. District judge issued a temporary restraining order in a lawsuit filed on behalf of two protesters, barring police from using tear gas unless lives were in danger. A little over a week later, the Portland City Council voted to slash $27 million from the police department’s budget.

Despite promises of reform from the police department and city officials, protests continue to grow violent and destructive.

A June 30 protest march on the headquarters of the Portland Police Association devolved into violence when demonstrators allegedly threw rocks and other objects at police, who declared a riot and used tear gas to turn back the crowd despite the federal judge’s order, which banned the use of tear gas unless lives were at stake.

Over the July 4 weekend, Trump and the Department of Homeland Security launched rapid deployment teams to protect federal monuments in cities around the country. The president later expanded the role of federal agents, saying he had “no choice” but to “surge” federal law enforcement into American cities to fight violent crime.

During one of the confrontations in Portland, Navy veteran Christopher David, 53, was beaten with a baton by a federal agent in a July 18 incident that was caught on cellphone video that went viral. David told ABC News that he went to the Mark O. Hatfield U.S. Courthouse in hopes of speaking to the federal agents after viewing a video of men in combat fatigues with no insignia “abducting citizens off the streets of Portland and stuffing them into unmarked vans.

Instead of seeing David, who at the time of the beating was dressed in a Naval Academy sweatshirt and a Navy ball cap, as a concerned veteran, he said they saw him as “a target.”

In a statement to ABC News, the U.S. Marshals Service said David “presented a threat to deputy U.S. Marshals” by failing to obey commands to back up and trying to enter the courthouse grounds.

“Based upon the circumstances at the time incident, the deputies believed that the force used was necessary to protect themselves and others from physical harm,” reads the statement from U.S. Marshals.

Even Wheeler, the mayor of Portland, has not been immune to the aggressive tactics of federal agents. During a July 23 protest outside the courthouse, Wheeler was among a crowd of protesters who were tear-gassed by federal officers.

“I want to thank the thousands of you who have come out to oppose the Trump administration’s occupation of this city,” Wheeler told the crowd moments before tear gas was deployed. “The reason this is important is it is not just happening in Portland … we’re on the front line here in Portland.”

The violence between protesters and federal agents escalated last weekend, prompting Portland police to once again declare a riot early Sunday when protesters breached the reinforced fence around the federal courthouse. Federal agents guarding the building deployed tear gas on the demonstrators, who officials alleged hurled projectiles and fireworks at the agents.

Andre Miller, a Black Lives Matter protester who was hit in the head by a tear gas canister during July 21 demonstration, addressed protesters at a rally in Portland on Wednesday night before federal agents deployed tear gas again to disperse the crowd. Miller, with his head bandaged, made a point of putting the focus back on the Black Lives Matter movement.

“I want y’all to make sure that Black Lives Matter is your number one priority,” said Miller. “This is just the beginning.”