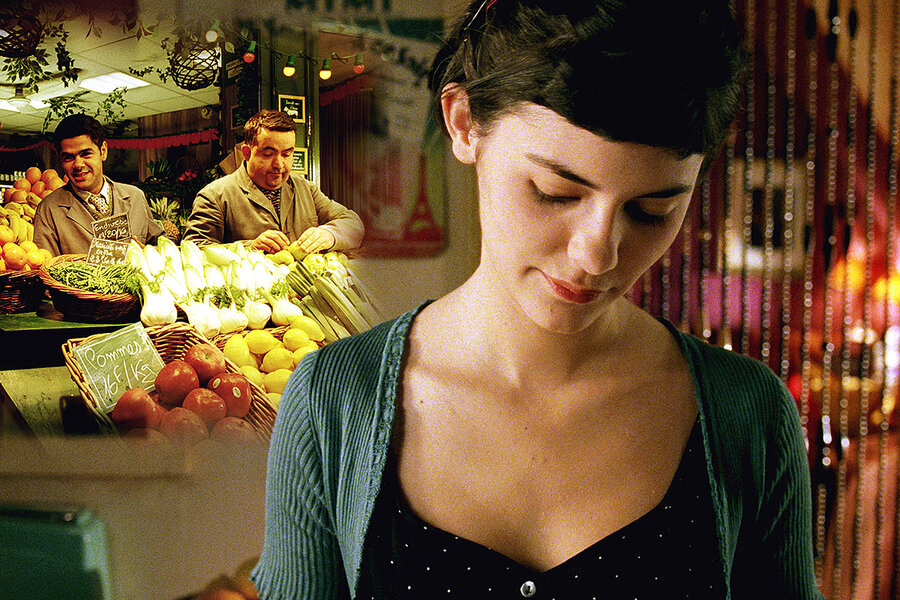 I’ll admit it: I am perfectly content to see an otherwise mediocre movie as long as it’s set in an alluring locale. Especially these days, movies can serve as passports to places otherwise out of reach. Few destinations are more scenic or romantic than Paris, which is why I’ve chosen the City of Lights to kick off this itinerary.

So many films – good ones – have been set in Paris that untravelled moviegoers may nevertheless feel like they know the place. Even if you’ve been there, you may discover, as I did, that you experience the city through cinematic eyes. Love of movies and love of Paris are, for many of us, inextricably entwined.

There are so many movies I could cite that are much more than mere travelogues. Jean-Pierre Jeunet’s “Amélie” (2001) utilized some 80 locations and yet never felt like a scenic tour. The cameras in Jean-Jacques Beineix’s thriller “Diva” (1981) zoomed up, down, and around the fabled Metro stations. Jean Renoir’s “Boudu Saved from Drowning” is a great comedy that is also a priceless photographic record of 1930s Paris. Woody Allen’s “Midnight in Paris” (2011) contrasted the modern day city with re-creations of the bistros and drawing rooms of the expat Lost Generation of Hemingway and Fitzgerald. Richard Linklater’s “Before Sunset” (2004) did for Paris what his earlier “Before Sunrise” did for Vienna. And of course, when Rick and Ilsa in “Casablanca” flash back to happier times, it’s Paris that we see.

Here are a few favorites for home viewing this week.

Stanley Donen’s 1963 romantic mystery caper, “Charade,” stars Cary Grant and Audrey Hepburn at their most iconic. Like all the films I’m citing in this column, it can be enjoyed apart from its Parisian pedigree, but why not take in the sights anyway? Con man Grant teams with the recently widowed Hepburn to retrieve a stolen fortune while pursued by a trio of menacing crooks. All this and Henry Mancini’s famous theme song, too. The Seine, as is true for just about every Paris-set movie, is on full view, along with an outdoor market and a Punch and Judy marionette show in a garden park in the Champs-Élysées. My favorite dialogue exchange between the two stars comes during an evening boat trip on the Seine:

Grant: “Oh you should see your face.”

Hepburn: “What’s the matter with it?”

Hepburn made quite a few other films set in Paris, some – like “Sabrina,” “Love in the Afternoon,” and “Funny Face” – memorable. The latter, also directed by Donen, starring Hepburn and Fred Astaire, displayed in pleasingly untouristy ways the Louvre, the Eiffel Tower, Notre Dame, and the Arc de Triomphe. (Unrated)

“An American in Paris”

Most of “An American in Paris,” a 1951 Vincente Minnelli musical replete with great Gershwin tunes, was filmed not in Paris but on the soundstages of MGM.  But this fact only reinforces the idea that, for many of us, Paris is more a state of mind than an actual city. The re-creations complement our romantic imaginings. Gene Kelly plays a struggling expatriate painter and Leslie Caron, making her movie debut, is the winsome object of his amour. (Caron had previously danced in Roland Petit’s Ballets des Champs-Élysées company.) Seven years later she triumphed in another Parisian musical, “Gigi.” The Kelly-Caron pas de deux on the banks of the Seine, choreographed to “Our Love is Here to Stay,” is one of the most moving of all musical numbers. The final 17-minute wordless ballet sequence incorporates the canvases of such great French painters as Renoir, Dufy, Utrillo, and Toulouse-Lautrec. (Unrated)

Unlike “Charade” and “An American in Paris,” Jean-Luc Godard’s 1960 debut feature, “Breathless,” was filmed in black and white with lightweight equipment on the streets of Paris in an improvisatory style far removed from Hollywood. And yet the movie is a sideways tribute to low-budget American gangster movies and Humphrey Bogart. Jean-Paul Belmondo is an amoral drifter who hides out from the police in the Paris apartment of his sometime girlfriend, played by Jean Seberg, an American student at the Sorbonne who hawks copies of the International Herald Tribune on the Rue Campagne-Première. The film is one of the crown jewels of the French New Wave. (Unrated, with English subtitles)

“Charade,” “An American in Paris,” and “Breathless” are available on at least one of these platforms: Amazon Prime Video, YouTube, Google Play, iTunes.