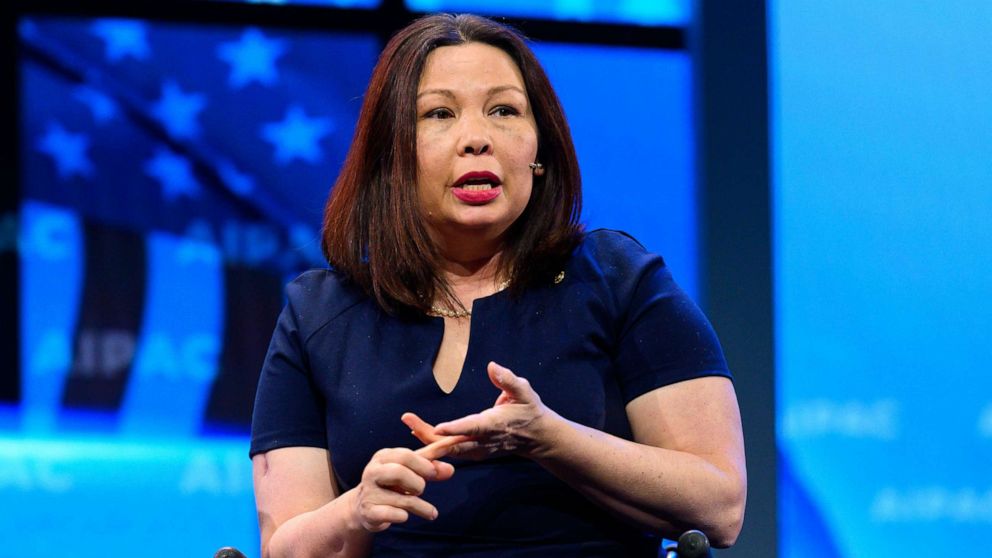 “He continues to take Vladimir Putin’s word above his own intelligence community,” she told ABC News Political Director Rick Klein on the “Powerhouse Politics” podcast on Wednesday. “I just don’t know why he continues to put our adversary above our own people.”

Duckworth sits on the Senate Armed Services Committee and cited the briefing for senators, adding that the move “would be consistent with how our adversaries act.”

Trump, in an interview with Axios, said he “never discussed” the matter in a phone call last week with the Russian president, and when pressed on why he didn’t raise it, he said, “That was a phone call to discuss other things and frankly that’s an issue that many people said was fake news.”

Duckworth, a former U.S. Army lieutenant colonel, is urging the Department of the Army to conduct an investigation into whether any of the deaths or injuries of U.S. troops over the past two years in Afghanistan were “related to the bounties.”

Before entering politics, Duckworth deployed to Iraq in 2004, losing both her legs and use of her right arm when the Blackhawk helicopter she was piloting was struck by a rocket-propelled grenade.

Her urgency on the issue stems from her own years of service, but amid the former vice president’s search for his own running mate, her authority has landed her on a shortlist of women in contention to be vice president.

If she were to serve as Biden’s second-in-command, Duckworth, an Iraq War veteran and Purple Heart recipient, will likely lean on her background. But the senator would not reveal when she last spoke to Biden or her standing in the ongoing process.

“I’m not at liberty to say whether I’ve spoken to him,” she said, adding that their “paths cross” at events. “I’m willing to do whatever I need to do to serve my nation. … Some girls fall for the drummer in a band, I fall for the ‘you need to serve your country’ line.”

Before Biden makes a decision, which he said he plans to have a choice by next week, he is expected to meet with the contenders at his house in Wilmington, Delaware, a final step in the process that has been complicated by the coronavirus. But Duckworth said that she is confident that the Biden team “will do everything they can to safeguard the health and well-being of all involved.”

Duckworth is among an even smaller cohort of women who have a personal relationship with the Biden family, which developed in the years after she introduced Biden’s late son Beau, at the 2008 Democratic National Convention.

“It was incredibly nerve racking,” she said of speaking at the quadrennial gathering, before adding, “it made me feel so patriotic.”

Their relationship further evolved when she served in the Obama administration as an assistant secretary in the Department of Veterans Affairs, where she said, her and Biden and Jill Biden’s “paths crossed many, many times,” because of their focus on veterans issues.

“Over the years, I learned and got to know this military family and their dedication to our veterans and our currently serving troops and have been very, very proud to have known the Bidens all these years,” she continued.

With the election less than 100 days away, Duckworth excoriated the president’s response to the coronavirus pandemic, saying he has “failed to address” the crisis, which she suggested has exacerbated issues within her hometown city of Chicago.

“We could be doing so much better,” she said. “But this president has so badly botched our nation’s response to this pandemic, I guess, ‘magical thinking,’ as he said, or ‘magically disappear,’ isn’t working.”

Amid the pandemic, Duckworth is balancing dual roles as a senator and a working mom to two daughters — a reality that has put more weight on some of her legislative priorities.

“I was always a supporter of child care and universal pre-K, for example. And in the last four and a half, five months, showed me how desperately we need it in this country. I can fly helicopters, but I am not equipped to teach a 5 year old to read,” she said.

As the country debates when schools should reopen, Trump continues to urge students and teachers to return to classrooms, even as cases of the virus continue to spike across more than two dozen states.

For her part, Duckworth spoke to the very difficult catch-22 parents across the country are currently facing.

“You don’t want to fail your children. But on the other hand, I don’t want her catching COVID-19 either,” she said. “So this is really, really tough for working families who are just barely hanging on.”

The junior senator is pushing for Congress to develop a child care plan, and implement universal pre-K and more testing amid the outbreak. She also said she is prioritizing “significant” funding for schools in the next coronavirus relief bill, along with guidelines for reopening.

Asked about another confrontation with the White House — Trump’s threats to dispatch federal officers into Chicago — Duckworth said she’s “happy to take a look at that” if agents work “in partnership” with the mayor and local law enforcement.

But Duckworth stood defiantly against the clashes in Portland, Oregon, between federal agents in tactical gear and protesters, calling it “simply not acceptable” and suggested the president is acting out of pure politics.

“They’re grabbing peaceful protesters off the streets, shoving them into unmarked vans and driving off,” she said. “Something is wrong in Portland, with the president continuing to politicize all sorts of institutions, whether it’s law enforcement or federal agencies, for his own political gain.”