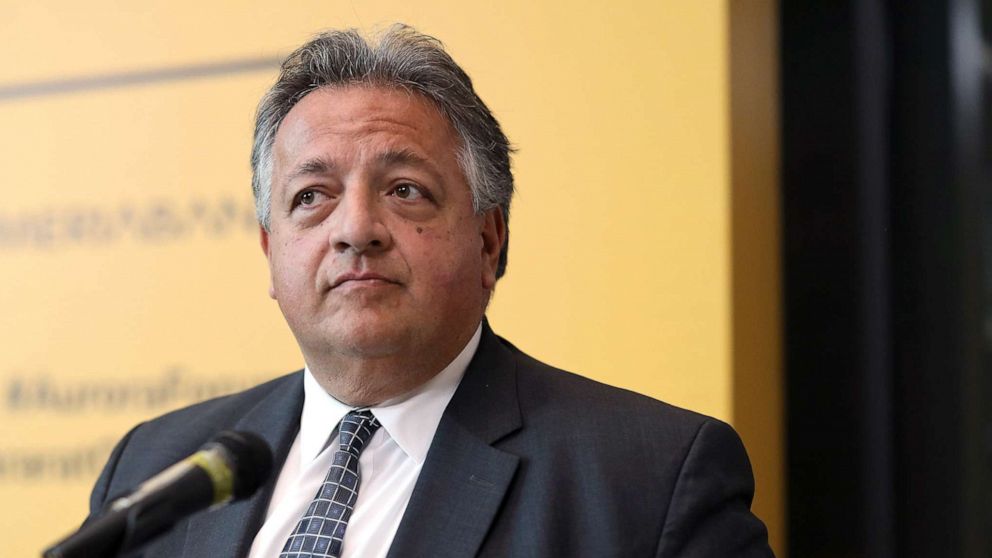 Dr. Noubar Afeyan, co-founder and chairman of Moderna Therapeutics, said the biotech firm would become the first U.S. company to enter Phase III of a clinical trial for a potential coronavirus vaccine.

Moderna is one of the top contenders in the global race to develop a vaccine to curtail the spread of the novel coronavirus.

“The plan is to start enrolling this morning, and this will continue over the next couple of months. We have a very strong demand of folks who volunteered to participate,” Afeyan told ABC News’ chief anchor George Stephanopoulos Monday on “Good Morning America.”

The blind trial is expected to include 30,000 volunteers. Half of the volunteers will receive Moderna’s vaccine and the other half will receive a placebo of sodium and water. Afeyan said countries will work to identify the most vulnerable people to ensure they receive a vaccine first.

Volunteers are needed for this vaccine trial and future clinical trials. People 18 years of age and older who are interested in participating in a trial can visit the Coronavirus Prevention Network or ClinicalTrials.gov, with a search identifier NCT04470427 for specific locations.

The authorization of Moderna’s vaccine by the Food and Drug Administration will depend on how quickly some 150 cases of the infection occur, according to Afeyan.

He said 150 cases of infection “need to occur … to statistically be able to compare the placebo … and declare whether the vaccine” provides adequate protection.

“The trial will essentially reach its goals once we hit 150 cases,” he noted.

If successful, the group receiving the vaccine should have a disproportionately lower portion of the cases than those would did not get the vaccine.

“We all want to have these answers. We have a certain number of cases that we need to see in the trial before we can demonstrate whether the vaccine arm [of the trial] gives us more protection than folks who are not in the vaccine part of the trial,” Afeyan said.

Ultimately, he explained, it is up to the FDA to ensure that all the safety and efficacy measures have been met before the vaccine can be broadly distributed. The FDA has mandated a protection value of at least 50% for any vaccine to be considered for authorization.

Afeyan added that Moderna hopes to have authorization by the FDA by the end of 2020 or early 2021. By 2021, Afeyan says the company expects to have between 500 million and 1 billion doses ready for distribution upon FDA authorization.

“We’re talking late this year, next year, before the FDA can make this adjudication. It’s difficult to predict hearing all of the intensification of this virus spreading in the U.S.,” Afeyan said. “Certainly, we will be doing the tests in areas where there is a significant viral challenge so that the test can actually very quickly see whether we’re giving the protection so it could go quicker but it could also take longer.”

He added that he hopes Moderna will have additional clinical trial data available by the fall.

In responding to concerns that some Americans may be reluctant to be vaccinated, given the expedited nature of the development process, Afeyan said, “the notion that people would not avail themselves to the protection, to that kind of capability to have their immune systems have the chance to fight this disease, is no different than crossing the street at rush hour without looking at the traffic on either side. You can do that, and you’ll risk significant bodily harm. As far as I’m concerned, people have every right to be cautious, until there’s data.”

Unlike some other companies that are developing vaccines using live or inactivated viruses, Moderna’s vaccine uses messenger RNA (mRNA), which are cells used to build proteins. Tailored mRNA can instruct other cells to produce specific protein and, in turn, prompt the body to produce antibodies to the coronavirus.

Moderna’s vaccine was among the first to begin testing in humans, with trials being conducted by the National Institutes of Health in collaboration with the National Institute of Allergy and Infectious Diseases. There are at least 25 vaccines that have advanced to human studies and another 141 that are being tested in a laboratory, according to the World Health Organization.

ABC News was at Meridian Clinical Research in Rockville, Maryland, for the first day of Moderna’s Phase 3 trial. One participant, a man in his 70s from the Washington, D.C., area, told ABC News, “To me, it’s obvious that a vaccine is the Holy Grail.”

He went on, “I think it’s very important that a person steps up and tries to do something good for the world at this point on the biggest crisis facing the world in many, many centuries.”

Meridian said it is looking for volunteers to be part of the trial in eight locations in the U.S.

According to Phase 1 data released by Moderna earlier this month, COVID-19 antibodies were found in all 45 volunteers who received the vaccine.

Each group received different doses of the vaccine and two injections 28 days apart.

These early results, published in the New England Journal of Medicine, showed the vaccine was “generally safe and well-tolerated” and induced an immune response.

None of the participants experienced serious side effects from the vaccine, with more than half reporting overall mild side effects, such as fatigue, headache, chills or pain at the injection site. Symptoms were more common among those who received higher doses of the vaccine.

At a House Energy and Commerce Committee on the development of COVID-19 vaccines last Tuesday, Moderna’s president, Dr. Stephen Hoge, said Moderna selected a lower dose “to maximize the immune response while minimizing adverse reactions” for the Phase III trial.

Lawmakers asked the pharmaceutical executives to discuss pricing of the vaccines to guard against price gouging.

While AstraZeneca and Johnson & Johnson pledged they would produce hundreds of millions of doses of their vaccines at no profit to themselves, Hoge said “we will not sell it at cost.”

Afeyan, when asked Monday, would not specify how much a vaccine would cost every American.

“We and other companies have said that the pandemic is not a time where we intend to use kind of the price as a way to do anything but increase supply so we will certainly be in the market at a price level that allows us to ramp up our supplies and reach potentially up to a billion people next year,” he said.

The U.S. government has pledged to purchase at least 100 million doses of a Pfizer vaccine — if it is authorized by the FDA — for $1.9 billion. This would put the price of vaccination at $40, but the government has vowed not to charge for those doses.

With 15 non-COVID clinical development programs, the Massachusetts-based biotech company has yet to receive approval for any of its drugs.

Moderna currently has a market cap of more than $30 billion, based on the expectations of its COVID-19 vaccine success and employs over 820 people. It was granted $483 million from the federal government to develop its vaccine and on Sunday the company was awarded an additional $472 million to pursue the latter phases of the human trials.