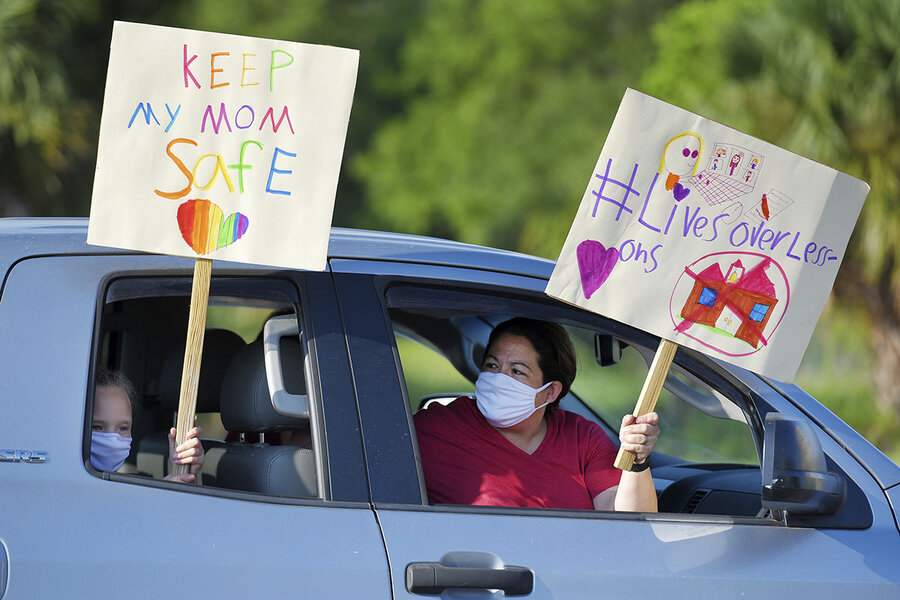 Even for a teacher of the year like Aileen Gendrano Adao, starting public school in August will be a big adjustment. She’s switching from teaching senior English at a magnet school in a low-income, Latino neighborhood in east Los Angeles, to teaching at a more diverse high school in a gentrifying area.

She’s also making another change: Her school year will begin entirely online. While she would much rather work with her new students in person, Ms. Gendrano Adao is relieved not to be in a classroom during a pandemic. “It just gave me a lot of anxiety, so I was happy about the decision that we were going to start online,” she says.

The region has seen a surge in COVID-19 infections, and her son, about to enter kindergarten, has asthma. She’s grateful that her union, United Teachers Los Angeles, an affiliate of the two top teachers unions, got out in front of the superintendent – and the governor – on this issue, and insisted that the nation’s second largest school district starts with remote learning. “They have our back,” says this union member.

As nearly 14,000 school districts across the United States prepare for a new year, teachers unions are playing a leading role in how students and the country will get back to work. While wanting to protect their members, the unions could also have an effect on America’s sagging economy and potentially the course of education in the next year – and beyond.

So far, 11 of the largest school districts are starting online, reflecting teacher concerns and local virus conditions. Teachers generally have a lot of good will in their communities, but that could slide the longer in-person school is delayed. Already, parents across the country are trying to form small “home-schooling pods” with other children and tutors as an alternative to remote learning.

Sara Hinkley, of the University of California, Berkeley Labor Center, recalls how Hurricane Katrina decimated teachers unions in New Orleans because the city did not hire the previous union teachers when they switched to charter schools. “Disasters, including pandemics, are often times when there’s an opening for privatization. Sometimes, the public sector can’t really adapt because it’s required to serve everybody,” says Dr. Hinkley.

Teachers unions have to “thread a needle” as they protect their members during the pandemic and make sure it’s safe to go back to school, says Rick Hess, director of education policy at the American Enterprise Institute, a center-right think tank in Washington.

In California, they helped sway a governor with four young children from favoring in-person school to mandating remote teaching in more than half its counties. In New York, the president of the American Federation of Teachers, Randi Weingarten, sat on the governor’s commission that set metrics for reopening schools. In Florida, the largest teacher and education worker union sued the state to block an order requiring brick-and-mortar schools to open.

Now, “safety strikes” are a last resort if authorities can’t protect the health of educators and others at schools, Ms. Weingarten told the AFT’s virtual convention this week. The union is the nation’s second largest, with 1.7 million members, and is leaving it up to locals to decide whether to strike. Two years ago, teachers walked out in West Virginia, Oklahoma, and Arizona to demand higher pay and school funding.

Most public school teachers belong to unions, whose influence varies by state, depending on collective bargaining, which is illegal in seven states. Right now, the AFT and the National Education Association – the country’s two biggest teachers unions – have “really big megaphones” in the debate over the safety of reopening in a pandemic, says Mr. Hess.

Parents on all sides of the school-opening issue have strong feelings, but aren’t organized. That allows unions to fill that void, making it easier for school boards and superintendents to not open or open partially amidst health and safety concerns, says Mr. Hess. Meanwhile, President Donald Trump’s threat to withhold funds from schools as the U.S. continues to pass grim COVID-19 milestones is only strengthening unions’ resolve.

Politically, teachers unions are the biggest union donors to the Democratic party. Presidential candidate Joe Biden, who spoke at the virtual convention on Thursday, has called for more funding to open schools safely, and for decisions about opening to be made at the local level.

Teachers unions say it’s the health risk that’s guiding their approach. The Kaiser Family Foundation finds that 1 in 4 teachers have a condition that puts them at higher risk of serious illness from the novel coronavirus. Age is one of those risk factors: More than 18% of all public and private school teachers and 27% of all principals are over age 65.

Educators say they would much prefer to be with their students, where they can better relate and hold their attention, and where students can socialize. Suddenly having to teach virtually when many schools closed in the spring was like trying to build an airplane in flight. It crashed.

In Los Angeles, 50,000 Black and Latino students in middle and high school did not regularly participate in online school, laying bare deep disparities, according to a report by the Los Angeles Unified School District.

Indeed, it would be easier and more fulfilling to return to school, were it not for health concerns, say teachers. Consider Judith Grey, a veteran teacher at North Miami Senior High School in North Miami, Florida. When she taught English as a second language in the classroom, she would be home by 2:30 p.m. Teaching online, she went till 10 p.m. almost every night, calling students and parents individually.

Still, she supports her union’s lawsuit, arguing it’s not safe for her or her students, given that Florida leads the nation in cases per 100,000 over the last seven days. “Even one case of COVID puts everyone at risk,” she says.

In California, though, legal action is going in the opposite direction. The Center for American Liberty has sued state leaders on behalf of parents and students over the blanket closing of in-person public and private schools.

“The governor’s decision to shut down educational facilities in more than 30 counties denies children in these counties their right to a basic education,” said Harmeet Dhillon, the founder of the center and the California chair of the Republican National Committee. She’s getting calls from parents on both sides of the political spectrum.

Ms. Dhillon said that science supports the case for in-person schooling. Various studies and data show young children far less susceptible to getting and transmitting the virus than adults and the American Academy of Pediatrics describes COVID-19 child deaths as uncommon. That’s why California is allowing elementary schools in counties on its COVID-19 “watch list” to apply for a waiver to reopen. Still, schools don’t exist in a bubble, and public health officials now say older children can get infected and transmit the virus at a similar rate as adults.

Ms. Weingarten acknowledges that different conditions allow for different approaches, and that returning to school will not be risk free. Her union points to Montana as an example where schools can open safely with social distancing.

This week, the union approved a resolution setting a daily community infection rate below 5% for schools to reopen, along with “effective” contact tracing and isolation. It wants masks for students and teachers, physical distancing of 6 feet, sanitizing of buildings and buses, and necessary updates to ventilation. The union puts the total cost for schools, colleges, and day cares at $400 billion. Congress is far from agreement on the next aid package.

In Los Angeles, where virtual classes are planned to begin Aug. 18, the union is negotiating the conditions for “crisis distance learning” first, and the logistics of reopening second. Under discussion: rules on teacher schedules and hours, student screen time, and online instruction quality. But media reports that the union is negotiating for social justice measures such as defunding the police are inaccurate, says union President Cecily Myart-Cruz. They are goals, not conditions to reopen, she says in an interview.

Bootsie Battle-Holt, a teacher coach who visits Los Angeles schools to help bridge inequities in math, particularly for African American students, says the virus numbers have to decline to a point where she feels safe enough to return.

When she does go back, she hopes that it will be to an education experience that borrows what’s useful from online learning and repairs the gaps that have been exposed. “We have to think about how we are going to do things differently, and not just this rush back to the old normal.”