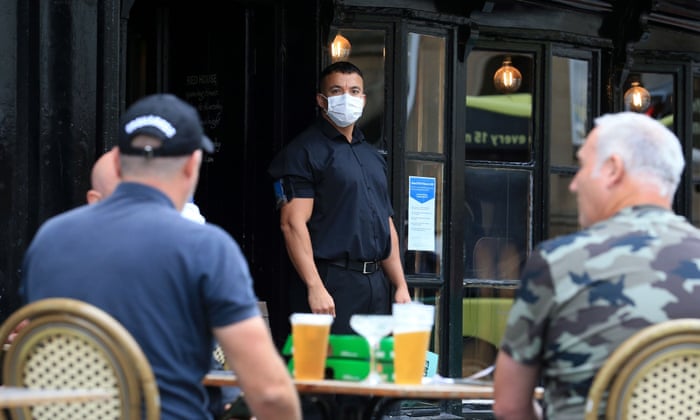 English pubs are likely to be spared any new restrictions on social contact to stem coronavirus outbreaks, with the focus instead falling on limiting gatherings in homes, Downing Street has indicated.

Amid speculation about potential further curbs on freedoms if Covid-19 cases rise following the full return of pupils to English schools in September, officials have stressed that they hope to keep any lockdowns local and avoid further significant harm to the economy.

No 10 also argues that closing pubs or other parts of the hospitality industry would not necessarily be effective, given the importance of transmission between households in local outbreaks, such as those which prompted emergency restrictions for millions of people in the north of England.

A government source said the most likely next step if infections escalated would be more widespread restrictions on social contact rather than closing down specific industries.

“It’s not a 1-2-3 process but the point is that it is based on specific information about what is happening. It suggests it’s household to household,” the source said. “In the north-west, the problem is households, not pubs. So you can only go to the pub with your household.”

Speaking on Friday after Boris Johnson delayed some easing measures as infection rates increased, Chris Whitty, the chief medical officer for England, said the country was “at the outer edge” of what could be reopened, and that if further rules were lifted, others would have to be tightened to compensate.

Prof Graham Medley, who chairs the Scientific Advisory Group for Emergencies (Sage) subgroup on pandemic modelling, said on Saturday that one option might be to close pubs when pupils return to school.

Johnson’s spokesman, however, played down the idea and stressed the desire to avoid nationwide measures if possible.

“Our approach is a localised one, where you would assess the situation on the ground and take whatever steps were required to slow the spread of the virus,” he said. “More broadly, we are committed to supporting the hospitality industry, which has had a very tough time. It employs more than 2 million people, predominantly young people, and it’s important that we continue to support it.”

Asked what, if any, compensatory measures might need to be taken, he pointed to the measures introduced at the end of last week in the north of England, which barred people from different households from meeting indoors, and the subsequent declaration of a major incident in Greater Manchester.

“Decisions will always be based on local evidence and scientific guidance,” he said. “We have in place a system now for localised lockdowns. You will see that in Greater Manchester, and in other areas, the steps that we have taken have been to restrict social contact, because that was what the experts considered was responsible for an increase in the prevalence of the virus.”

There will, however, still be a focus on other potential areas of spread, such as workplaces. Localised restrictions imposed on Leicester were connected to potential infections at garment factories.

Some councils are believed to be concerned that not all business outbreaks are being reported quickly enough. Sandwell council in the West Midlands, which Public Health England has listed as an area of concern over rising case numbers, has urged firms to report any outbreaks promptly.

No 10 is adamant to English schools will reopen fully after the summer. “You’ve heard from the prime minister on many occasions his absolute commitment to getting out children back into school in September,” the Downing Street spokesman said. “That’s vital for their education and their development. We are planning for all pupils in all year groups to return to school full time from the beginning of the autumn term.”

The only exception could be “a very specific localised lockdown that might require a single school to close”, he said.

The London mayor, Sadiq Khan, said on Monday that it was “totally unacceptable” that ministers had reportedly discussed the possibility of sealing off the capital if infections rose sharply there.

Johnson’s spokesman said there were no plans to do so, but stressed that the idea of restricting travel into a badly affected area had already been outlined as a possible course of action.

“If you look at the contain strategy, which we published just over two weeks ago, it sets out … the possibility of putting in place restrictions on travel if there’s an area that is particularly badly affected. One of the steps within that potentially includes closing down local transport networks. So it’s there, it’s contained in the document. It’s not a new thing.

“But to be clear, it’s not something that is specific to London or anywhere else.”

He also dismissed reports at the weekend that people over 50 might be asked to shield in the event of rising infections in the winter as inaccurate.