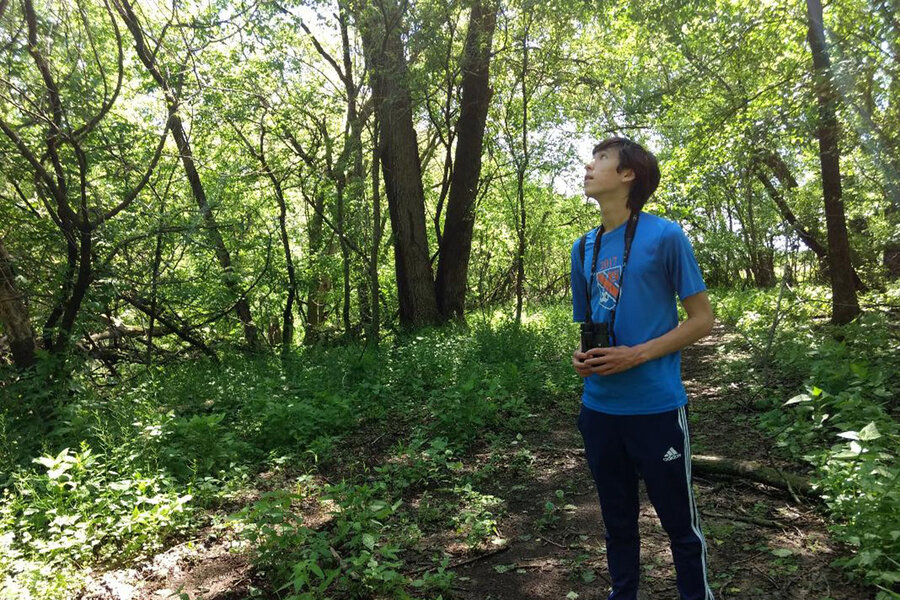 Isoo O’Brien tilts his head toward the exuberant trills issuing from nearby cottonwoods. “That’s a wren,” he says softly. Lifting his binoculars, he scans a reedy pond glinting in the morning sun. “Pied-billed grebe,” he says.

Walking quietly through a nature preserve in the industrial wastelands of Chicago’s South Side, Isoo is all ears, all eyes. In 20 minutes he sees – or hears – 34 species of birds. And just as he’s about to leave, the russet flash of an orchard oriole catches his eye. “That’s probably the most interesting bird I’ve seen,” he says, tapping No. 35 into his iPhone.

The coronavirus shut down university labs, but outside the universities, citizen scientists have been hard at work – and in many places they’ve been busier than ever. EBird, a creation of the Cornell Lab of Ornithology in Ithaca, New York, and since 2002 one of the leading citizen-science projects in the world, reported a 46% increase in submissions in early April compared with last year. On May 9, its annual Global Big Day, a record 50,000 participants recorded more than 2 million bird sightings around the world.

“I’ve been out more than I’ve ever been,” says Isoo, a rising high school senior from Evanston, Illinois. “Having school at home gives me a lot more flexibility.”

Whether people are gathering new information or helping to analyze what’s already been collected, COVID-19 has given them more time to get out in nature and more time to seek it online. Zooniverse is one popular online platform on which ordinary people can search for “clumpy galaxies” in Hubble Telescope photos, identify animals in camera traps on Mont Blanc, and transcribe labels from a collection of Arctic lichens that goes back to 1766. Laura Trouille, vice president of Citizen Science at Chicago’s Adler Planetarium and a co-investigator at Zooniverse, says the platform has seen a fivefold to tenfold increase in participation during the pandemic. With more than 250,000 participants contributing over 5 million entries each week, she says, it’s the equivalent of “a researcher working full time for 48 years straight.”

Indeed, citizen science is thriving as never before. Smart phones have made data collection easier than ever, while increasingly sophisticated methods of analysis are helping to transform mountains of raw data into science. These developments have raised the status of citizen science among professionals and helped them answer questions that would be difficult if not impossible to answer otherwise, shedding light on widespread phenomena like the effects of global warming and changes in land use across continents.

“It’s been totally transformative,” says Leslie Ries, an ecologist at Georgetown University, who studies butterfly populations and relies heavily on data collected by non-scientists. “I cannot say enough about how citizen science has not only changed the way we can do large-scale biodiversity analyses, but also the way we can involve the public.”

A striking example appeared last September in the journal Science, where scientists reported a 30% decline in bird populations across North America over three decades. They came to this startling conclusion in part by studying radar data, but also by using a long record compiled by citizen scientists, including results of an annual breeding bird survey organized by the U.S. Geological Survey (USGS) as well as data from the granddaddy of citizen science projects, the Audubon Society’s Christmas Bird Count.

“When you fly across the U.S., you see how much land use has changed, how much forest has been turned to agriculture,” says Peter Marra, a biologist at Georgetown University, and one of the study’s authors. “But when you see the actual numbers, you have to do a double take.”

Citizen science is not new. Before the professionalization of science, all scientists were amateurs: Charles Darwin comparing finches in the Galápagos or Henry David Thoreau recording the flowering dates of plants around Concord, Massachusetts. But science for the masses really took off in the 1990s, when the term “citizen science” first came into widespread use. It’s been flourishing ever since, making scientific research more decentralized and democratic than ever.

For many people it combines a love of the outdoors with the satisfaction of contributing to scientific knowledge. Susan Page, a retired medical technician, became interested in butterflies several years ago while volunteering in the nature preserves west of Chicago. Now, on sunny days from late spring on, she heads out to count them – from lowly cabbage butterflies and gaudy monarchs to great spangled fritillaries.

“I just feel better when I’m outside and I’m in nature,” she says. “I also like that I’m providing the data that can be used on the butterfly populations.”

Citizen science has a worldwide reach. Platforms like eBird, Zooniverse, and iNaturalist are available to anyone with a cellphone or internet service. One of the newer eBirders is Herbert Byaruhanga. Mr. Byaruhanga, who runs a bird safari company out of Rutoto, Uganda, says tourists coming to visit Uganda’s national parks are increasingly interested in eBird. Indeed, most eBird contributions from Africa come from tourists and other Westerners. But Mr. Byaruhanga has been trying to promote eBird among guides in his country, where, he says, “citizen science is not yet fully appreciated.”

The boom in citizen science reflects ongoing efforts to make science fun and easy. At the same time, it has focused attention on improving the quality of data, not just the quantity. Butterfly monitors must follow a protocol developed in England that involves walking the same route at regular intervals over the summer. EBirders, on the other hand, have more liberty; they simply enter the results of whatever walks they take, whenever they feel like it. But there are rules: They are expected to enter all the birds they see and how many of each, whether commonplace sparrows or once-in-a-lifetime warblers. Filters give greater weight to accomplished birders and flag unusual sightings, which local experts then review.

“You try to be tactful,” says Walter Marcisz, a volunteer eBird reviewer in the Chicago area who faces the challenge of vetting thousands of sightings each year. “If you let it go, it’s overwhelming,” he says.

To grow and diversify

The news for citizen science hasn’t been all good. While the coronavirus has boosted much participation, it’s disrupted activities that bring people together. Mr. Byaruhanga says COVID-19 has hurt bird tourism in Uganda and undermined the livelihoods of some 150 guides, forcing them to sit home or find other work, like farming. The USGS called off its annual survey of breeding birds. The Illinois Butterfly Monitoring Network postponed an outreach effort on Chicago’s South Side intended to extend monitoring to an understudied area but also to recruit a more diverse group of monitors.

Indeed, critics say that while citizen science has flourished, it has not included everyone it could. They say it suffers from the same lack of racial and ethnic diversity that affects scientific enterprise at all levels. This problem came into sharp focus last month when a Black birder, Christian Cooper, was harassed by a white woman while birdwatching in New York City’s Central Park.

“Is citizen science – like environmental issues, like conservation – is it a white space?” asks Jacqueline Scott, a Ph.D. candidate at the University of Toronto who studies race and the outdoors. “Yes it is. They’ve done little outreach to the Black community.”

Dr. Trouille at Zooniverse agrees. “In terms of diversity in STEM, in academia, in museums, in citizen science – there is so much more we need to do,” she says.

What’s the future of citizen science? More participants, undoubtedly, and still more science. As data accumulates, scientists at eBird and elsewhere say they will be able to detect ever longer patterns and trends – and better understand the dynamics of large-scale ecological shifts due to climate change and other factors. They also hope that the enthusiasm for citizen science extends to a wider variety of creatures and phenomena.

“There are so many things we don’t monitor,” says Dr. Marra. “I would think we could be expanding it to other species, insects, mammals, getting people interested in other species.”

As for Isoo, the end of the school year has freed him to pursue one of his current goals: to see as many different birds as he can in Cook County, his home territory, in one year. The record is 281. A thin, serious young man with a shock of brown hair, he shouldn’t be underestimated. Isoo has been a birder since he was 9, an eBirder since he was 11. But he knows that citizen science isn’t for everyone. At Evanston Township High School, his birdwatching gets mixed reviews.

“It’s interesting,” he says. “Some kids are, ‘This is really cool. It’s cool you’re pursuing your passion.’ Some kids don’t understand at all.”