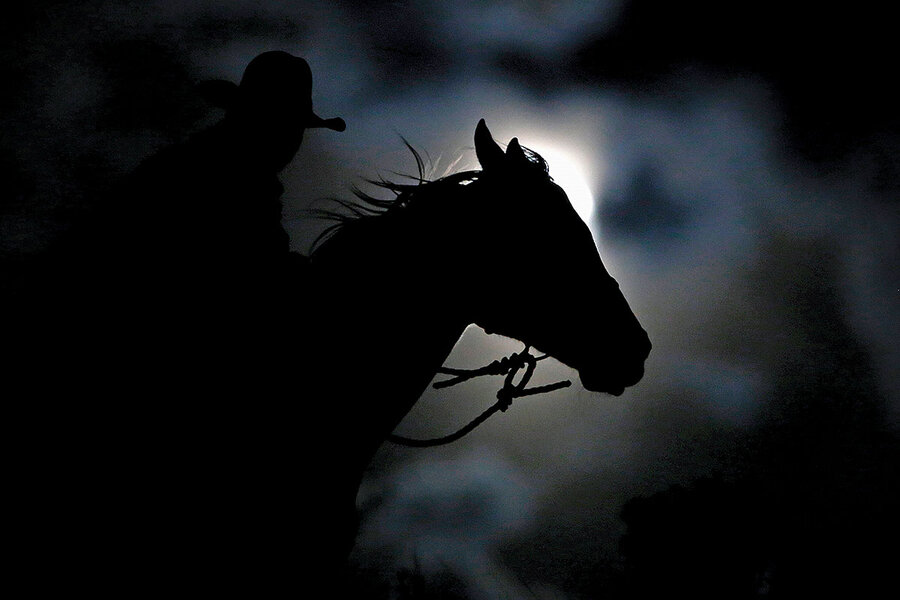 Beginning with “Black Beauty,” most children’s horse books include a dramatic night ride – to fetch help, to warn of impending disaster, to escape from evildoers. As a horse-crazy child, I was a connoisseur of those night rides. It wasn’t just the speed and the danger; it was the bond with the horse. I could only dream of what such a ride would be like until one summer night many years later.

My cousin Emma and her husband were new to the farm in Herefordshire, England, the summer my daughter and I arrived to stay. They grew barley, kept a small flock of sheep plus a few cattle.

Emma and I decided our three girls were the right ages for ponies. We already had one, Emma’s childhood pony, Cherry Pie, now snow-white, woolly as a camel, and spirited as ever. Emma had located another pony and a horse in a field two miles away. Cream the horse was a palomino, heavily built. Twinkle the pony was a bright bay and delicate. On investigation, it appeared that they were gorging themselves in the small pasture, and the farmer who owned them was only too glad to have them taken off his hands for the summer. A fourth pony, Hansel, was a full-blooded Dartmoor. He was shipped to us in a proper horse trailer that arrived in the farmyard one morning. He was a beautiful dark brown with a tail that swept the ground and a forelock that fell over his eyes. He was also so round that we had to use an old felt saddle with a crupper to keep it from sliding forward. Nothing else fit.

The children seemed blasé about the ponies. I, of course, was thrilled anew every morning to see them grazing in the big field: golden Cream, dark Hansel, bright Twinkle, and snow-white Cherry Pie. After breakfast, I would marshal the children to clean tack, catch the ponies, and tie them up in the farmyard to be groomed. The youngest child was the most amenable, brushing the rotund Hansel as high as she could reach.

The night the cows got out there was a full moon. The bedroom was almost light as day when Emma woke me.

“The cows got out,” she said. “They’re trampling the barley. We’ve got to round them up!”

I jumped out of bed. This was like a scene from the books, a midnight ride to save something. I threw on jeans, a T-shirt, a jacket. Emma was already in the pasture, shaking oats in a bucket. The horses were halfway down the hill, bunched shadows. At the rattling of the oats, Hansel gave a soft whicker and, followed by Cream, trotted toward us.

In the moonlight, the field was golden, the barley like some mythical grain, its harmony violated by a trampled path. The errant cows were huddled at the far end. By silent agreement, Emma and I each rode up one side of the field. Hansel blew softly through his nostrils. He seemed surprised to be ridden in a moonlit field, but willing. As we closed in on the cows, they turned and stared at us. Cream snorted loudly and tossed his silvery mane. Hansel stamped a forefoot. The cows crowded nervously together.

“We’ll go around behind them,” Emma called. A human voice sounded strange, otherworldly.

With Emma and I coming behind them in a pincer movement, the cows moved clumsily forward. The lead cow, a red and white Hereford, started back down the trampled path through the barley. The others followed.

Emma and I held back till they were almost at the end of the field. Then, wheeling, we cantered back along the
perimeter. We persuaded the cows toward the open gate of their field. Once they heard the hooves of our horses strike the concrete, they bolted through.

Emma and I paused astride our mounts in the middle of the farmyard. Behind us the timber-framed farmhouse slept; ahead of us, the fields rose steeply to the shaggy woods. Everything was bathed in moonlight. It was several moments before we slid down and stood again on ordinary ground.