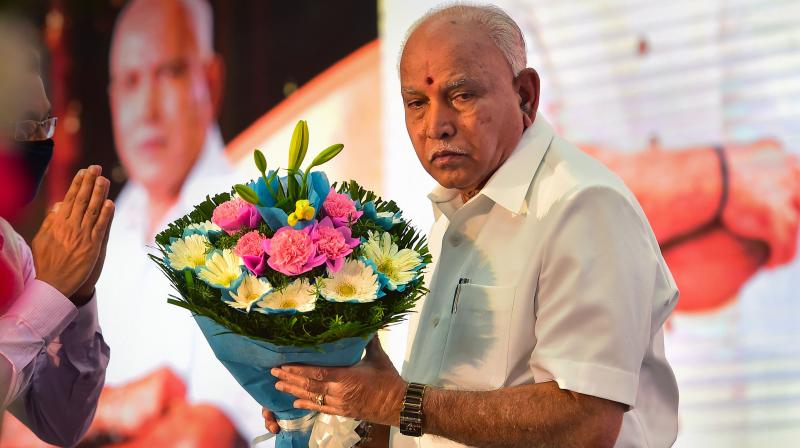 Deputy Chief Minister Laxman Savadi, whose name has been doing rounds since two days for Chief Minister's post has swung into action clarifying that his Delhi visit was only to meet Union Ministers to get their clearance for  pending projects in his department.

While speaking to reporters in Delhi, Mr. Savadi reposed his faith in Yediyurappa’s leadership. “Mr. Yediyurappa is our leader and he will complete the remaining three year term”, Savadi replied amid speculation about change of leadership in Karnataka.

In a series of tweets, Savadi stated: “Don’t read too much about my Delhi visit. My Delhi visit was to meet party top brasses. Don’t give it unnecessary publicity for my Delhi visit. My dear friends in Athani Constituency, please don't post posters or statements on social media platform”, Mr. Savadi requested.

“Merely because of my posters on social media, the media has been giving undue publicity to it.” In a social media post, posters congratulating him for becoming the next CM of Karnataka went viral.

In another tweet, Savadi said that “the state government is completing one year term and successfully fighting against the Covid19 pandemic. We are all obedient soldiers of the party and will abide by decisions taken by the party central leadership,” in this tweet, Savadi cleverly stated that he will abide by the party central leadership decision, which means there is nothing more than meets the eye.

The Karnataka deputy CM also indirectly blamed the media for speculating a leadership change. In his tweets, he requested the cooperation of the media to publish authentic news rather than publish baseless reports.

The talk about change of leadership in the state has led to Savadi supporters projecting him as the next Chief Minister of Karnataka. To put an end to all the speculation, Savadi said, “Yediyurappa is our leader and he will be the CM for next three years”.

Further he also said that there is no discussion held with party top brasses regarding change of leadership. However, he met BJP National President J.P. Nadda. BJP National organizing secretary, B.L. Santhosh, betenoir of the Chief Minister B.S.Yediyurappa.

After he arrived in Bengaluru on Wednesday afternoon, Savadi echoed what he said in Delhi. Speaking to reporters here on Wednesday, Savadi said that the media was unnecessarily giving publicity to his Delhi visit. Chief Minister Yediyurappa will complete his term. There is no change of leadership in the State, he reiterated.

No change of leadership: Party sources

Meanwhile, sources in the party also clarified that there will be no immediate change of leadership. Central leadership has no mood to interfere in Karnataka BJP affairs, till Covid-19 pandemic subsidies. Amidst Covid 19 pandemic, no party will take this kind of major political decision, sources said.

Senior functionary in the state BJP told this newspaper that, there is no need to give much attention to Savadi Delhi visit and his absence in completion of one year celebration of BSY government on Monday. The Chief Minister has decided to expand his Cabinet along with a reshuffle of the ministry. Few ministers are likely to be dropped to accommodate new entrants to the BJP. Savadi is also said to be in the drop list. To safeguard his seat, he had taken a Delhi trip to meet the party brasses, a leader added.