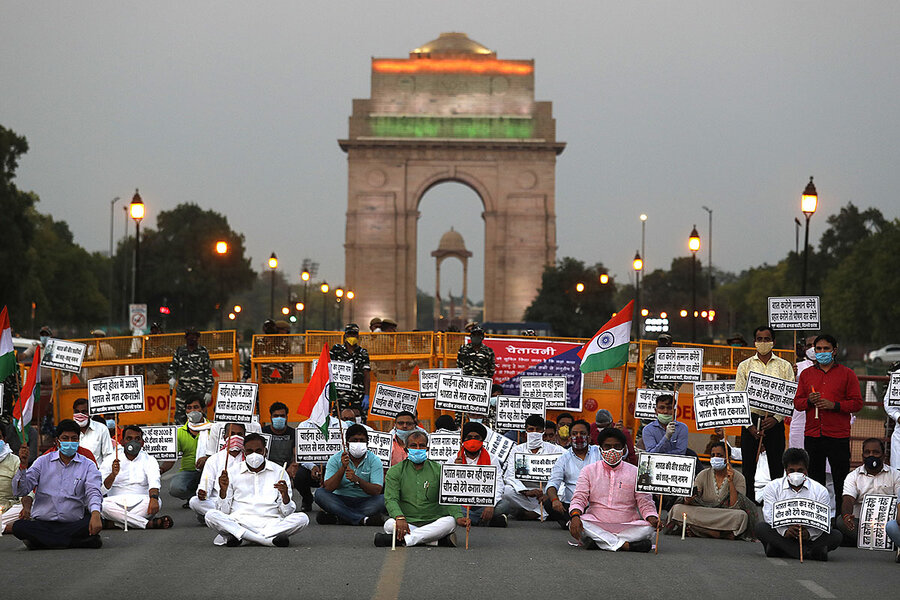 But now, facing a domestic outcry over the combat casualties, and calls for a boycott of Chinese goods, India moved swiftly this week to terminate cooperation with China in economic arenas ranging from telecommunications to railways.

“I wouldn’t be surprised to see more steps on the economic side,” Dr. Ayres says. “India has long felt China has treated it unfairly, economically.”

The full extent of the fallout – military, political, and economic – from the June 15 melee in the rugged Galwan Valley remains uncertain, as do the exact details of the high-altitude skirmish. Troops reportedly fought using rocks and clubs, and the dead include an Indian Army colonel. Beijing, for its part, has publicly downplayed the incident and has not confirmed reports of casualties among Chinese forces.

Beijing’s foreign minister, Wang Yi blamed the Indian military for the incident, saying Indian forces crossed onto China’s side of the Line of Actual Control (LAC), provoking and attacking Chinese troops. An editorial in the nationalistic Chinese newspaper Global Times stressed that “China won’t budge in terms of the border issue no matter how India messes it up.”

The LAC is not clearly defined, and India and China have different interpretations of where the border begins and ends.

But as satellite imagery offers clues as to what happened, there is agreement among defense experts that a key factor driving the clash was China’s stepped-up military presence and fortifications along the disputed frontier in recent weeks.

“The best information we have is this was initiated on the ground by the PLA [China’s People’s Liberation Army], crossing beyond where they have crossed before,” says Arzan Tarapore, nonresident fellow at the National Bureau of Asian Research. “In multiple locales where the incursions occurred, the Chinese at least set up tents, and in some reporting also were starting to erect bunkers,” he says.

China’s goal, he says, is to appear “uncompromising on its territorial sovereignty, and if that means pushing the boundary an extra few kilometers here and there, then that is part of the agenda.”

Moves on the western frontier conform to a pattern in recent months of Beijing accelerating a campaign to maximize its sovereignty, experts say – from Hong Kong and Taiwan to contested waters of the South China Sea.

“China is militarily far more powerful [than India] and has the ability to push forward,” says Dr. Ayres. “People see this as an example, on the India-China front lines, of the kind of incremental ‘salami slicing’ tactics that China has used elsewhere, particularly in the South China Sea.”

China’s Communist Party leadership views pressing its territorial claims as central to its legitimacy and restoring the nation to its rightful standing in the world. Yet the costs of such assertiveness are significant, Asia experts say.

The latest border clash, by derailing a military de-escalation plan that was underway, heightens the risk of more fighting. It will likely see India advance its ongoing efforts to strengthen military infrastructure such as roads and an airfield on its side of the border in order to facilitate troop movements.

Although the Sino-Indian territorial dispute has been far less lethal – until now – thousands were killed during a border war in 1962, and the fact that both India and China are nuclear powers increases the stakes of any military conflict.

New Delhi could respond by further strengthening defense ties with the United States and other countries – such as Australia, Japan, Indonesia, and Vietnam – that are pushing back against China’s growing assertiveness.

Both neighbors have much to gain from defusing the crisis, but with troops still facing off, and staunchly nationalist leadership from Mr. Xi and Mr. Modi, calmer relations could remain a distant prospect, experts say.

By stating that India also inflicted casualties on PLA forces, New Delhi may be trying to relieve popular pressure to retaliate. In a televised address Wednesday, Mr. Modi summed up his stance: “India wants peace, but when provoked, India is capable of giving a fitting reply, be it any kind of situation.”