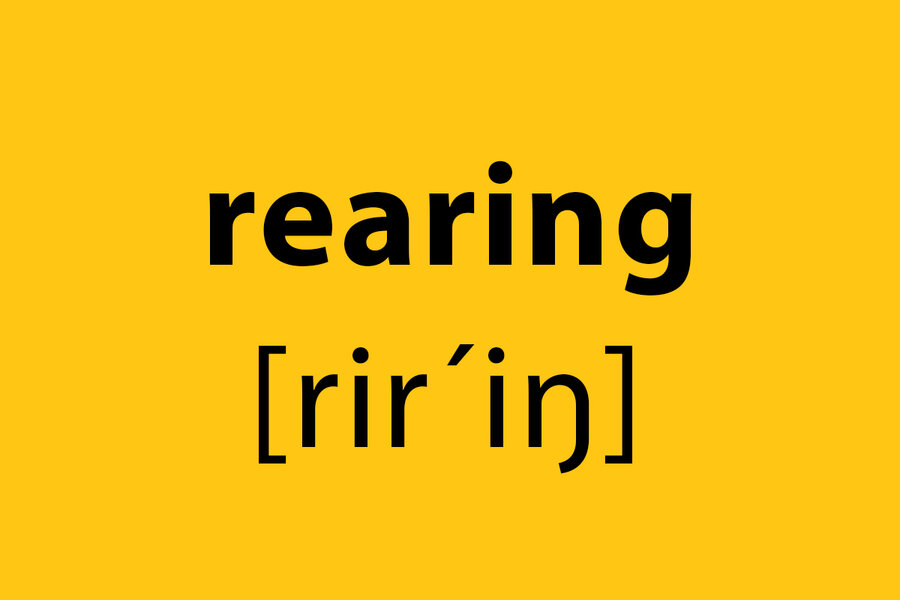 I’m raring to start this column. I’m so ready that I might even drop the “g” – I’m rarin’ to go. Recently I’ve noticed lots of people who are “rearing to go” instead. Which one is correct? This is a nerve-racking question, or perhaps a nerve-wracking one.

It turns out that these are all acceptable uses, even to medium-level sticklers such as the editors of Fowler’s Modern English Usage. You probably have your favorites – I prefer “raring” and “racking” – but the variants are equally correct.

If you are raring to go, you are “full of enthusiasm and eagerness.” I had always associated the phrase with car racing, drivers excitedly revving their engines before the flag goes down and they speed off. It actually refers to hyped-up horses, not race car drivers though. In certain regions of England, and parts of the American South and Midwest, rear is pronounced and spelled rare. While a horse “rears up” on its hind legs in standard English, it “rares up” in these dialects. When you are “raring to go” then, you are like a horse dancing around, ready for action.

The phrase seems to have originated with the dialect form, so raring to go is the default. Rearing to go is not wrong, per se, but sounds a bit awkward. It is a hypercorrection, preferred by people who don’t feel comfortable with a colloquial word or want to point out “the horsey connection,” as Fowler’s puts it.

Nerve-racking first appeared in an 1812 letter from Percy Bysshe Shelley, in which the poet bids farewell to the “nerve racking & spirit quelling metropolis.”

Nerve-wracking was occurring here and there by 1900, but in 1920 the “r-” form was nearly 15 times as common as the “w-” form, according to Google’s Ngram Viewer, which counts instances of words found in Google’s corpus of digitized books. “W-” has staged a comeback though; Fowler’s argues that nerve-wracking is now the more common spelling globally, though not yet in American English.

Nerve-wracking fits right into this pattern. Wrack is related to wreck, both of which can mean “to destroy, ruin.” In my ideal English, it would be possible to draw a distinction between the “r-” and the “w-” forms.

Something nerve-racking would be annoying, or even painful, but not as bad as something nerve-wracking, e.g., “nerve-wrecking.” In practice, though, both variants mean the same thing – “stressful” or “extremely trying.”