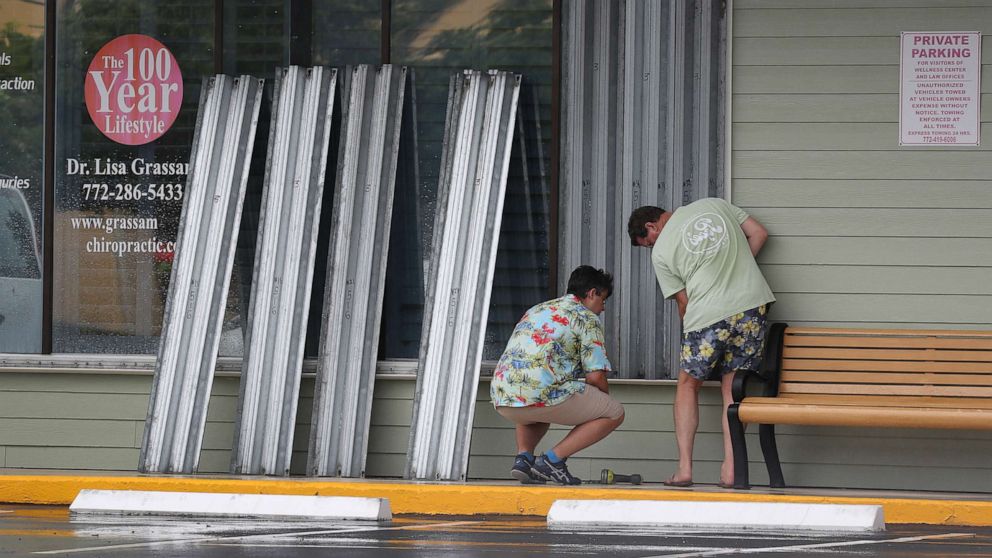 Isaias, previously a Category 1 hurricane, delivered torrential rains and high winds to the Bahamas Friday before heading toward Florida, according to forecasters.

Early Saturday evening, Isaias was downgraded to a tropical storm.

Forecasters predict the storm will travel northwest and arrive in southeast Florida on Saturday and Sunday. Parts of the state could see 2 to 4 inches of rain, with isolated maximum totals of 6 inches, according to the current forecast.

“These rainfall amounts could result in isolated flash and urban flooding, especially in low-lying and poorly drained areas,” the National Hurricane Center said.

Florida Gov. Ron DeSantis announced on Friday that he’s declared a state of emergency in every coastal county on the east side of the state, from Miami-Dade to Nassau Counties.

Virginia Gov. Ralph Northam also declared a state of emergency in advance of the storm, which is expected to affect parts of coastal Virginia starting on Monday.

Here’s how the news is developing. All times Eastern. Please refresh for the latest updates.

11 p.m.: Storm continues to close in on Florida coast

As of 11 p.m. ET, Isaias remains a tropical storm with sustained winds of 70 mph. Movement is still northwest at 9 mph and the center is currently about 80 miles east-southeast of Fort Lauderdale, Florida.

As of 8 p.m. ET, Isaias remains a tropical storm with sustained winds of 70 mph. Movement has slowed down further, now northwest at 9 mph and the center is currently about 100 miles southeast of Fort Lauderdale.

The hurricane warning was canceled for the central Bahamas. No other changes to alerts were made with the 8 p.m. update.

Isaias’ forward speed will continue to decrease overnight and into Saturday. The latest forecast has Isaias becoming a minimal category 1 hurricane once again as it moves near the east coast of Florida throughout the day on Sunday. However, either as a hurricane or tropical storm the impacts will be essentially the same and most dependent on the exact track the storm takes up the Florida coast.

With sustained winds of approximately 70 mph, Isaias was downgraded from a hurricane to a tropical storm early Saturday evening.

The storm’s movement has slowed a bit, with Isaias now heading northwest at about 10 mph. The storm’s center is about 115 miles southeast of Fort Lauderdale.

It’s possible the storm could regain strength overnight and transform back into a hurricane.

As of 2 p.m. ET, Isaias remains a minimal Category 1 hurricane with sustained winds now at 75 mph. It is moving NW at 12 mph and the center is currently about 140 miles SE of Fort Lauderdale, Florida.

There is now the chance that Isaias could weaken to a tropical storm at some point later today, according to forecasters.

Little change in strength is forecast over the next 24 hours as Isaias moves near the east coast of Florida later tonight through Sunday.

Isaias will then race up the East Coast Monday into Tuesday, continuing to weaken, but likely remaining a tropical storm bringing heavy rain and gusty winds up the coast early next week.

In the coming hours and into this evening, more of the outer bands will begin to impact the south Florida coast with downpours and gusty winds.

Sunday morning, the storm will pass near the southeast coast of Florida, bringing areas of heavy rain and strong winds. The magnitude of the impacts will come down to how close the storm actually gets to the coast tomorrow.

Right now there it looks like wind gusts of 40 to 60+ mph will be possible right along the coast, from West Palm Beach to Jupiter and Port St. Lucie, Florida.

The brunt of Isaias is hitting northern Andros, New Providence, (including Nassau) and other parts of the central/northwestern Bahamas right now.

Heavy rain, strong winds and storm surge will continue to impact these areas and overspread the rest of the northwestern Bahamas through the afternoon hours.

As of 11 a.m. ET, Isaias remains a Category 1 hurricane with sustained winds at 80 mph. It is moving NW at 12 mph and the center is currently about 135 miles SSE of Freeport, Grand Bahamas Island.

Further decrease in forward speed is forecast over the next 24 hours, with little change in strength expected as Isaias moves near the east coast of the Florida Peninsula tonight through Sunday.

The declaration allows trucks and supplies to move where help is needed. The state’s Emergency Operations Center — already activated for COVID-19 — is preparing for the storm as well, and state and local response teams are at the ready.

“Although the track and arrival of the hurricane could still change, now is the time for North Carolinians to prepare,” said Gov. Cooper. “Hurricane preparations will be different given the COVID-19 pandemic, and families need to keep that in mind as they get ready.”

The current forecast is for Hurricane Isaias to increase in intensity over the next 24 hours. The storm shifted west Friday afternoon, and its speed and path indicate it could reach North Carolina as early as Monday, making its greatest impact Monday night and Tuesday. However, the state is already seeing signs of the storm with high risk of dangerous rip currents along the coast, and the danger of tropical storm force winds is increasing.

The North Carolina National Guard has 75 guardsman and high-water vehicles on standby should they be activated to respond. The state’s Department of Transportation has more than 1,800 personnel, 1,550 pieces of equipment and more than 1,000 chainsaws ready to respond if needed.

They have also suspended passenger ferry today, began voluntary evacuations of Ocracoke, waived tolls on evacuation routes, and are preparing facilities and mooring plans for vessels for storm conditions.

Some local governments have already issued evacuation orders. While the state is still combating the COVID-19 pandemic, the state is urging people to make every effort to stay with family and friends, or even a hotel, as a first option. The state will coordinate shelters for those who need to evacuate.

During a press conference Saturday morning, Florida Gov. DeSantis said that the president signed a Federal Disaster Declaration in expectation of Hurricane Isaias.

On Friday, DeSantis signed an executive order for a state of emergency for every coastal Florida county on the East Coast yesterday.

Twelve Floria counties have declared a state of emergency. The Division of Emergency Management is sending 25 shelter kits with PPE to counties in the path of the storm. Each kit provides PPE for up to 400 people for 96 hours, the governor said.

“The State of Florida is fully prepared for this,” DeSantis said and that his administration has been in contact with local area hospitals. The hospitals aren’t anticipating the need to evacuate patients at this time, but one smaller hospital is going to move some COVID patients to another hospital in Brevard county.

DeSantis said everyone in Isaias’ path “should have enough food, water and medicine for seven days” and said there is still time to get supplies.

Hurricane Isais remains a Category 1 storm sustaining winds of 80 mph. The hurricane’s eye is near Andros Island Bahamas. Isaias is expected to move through the Bahamas today and near Florida tonight into Sunday.

Forecasts warn of a dangerous storm surge. Heavy rains are a main concern as Isaias nears the Florida coast. The storm is expected to run up the East Coast and impact the Carolinas, the Mid-Atlantic and the Northeast. Significant rainfall in the Carolinas and the major Northeast cities is expected.