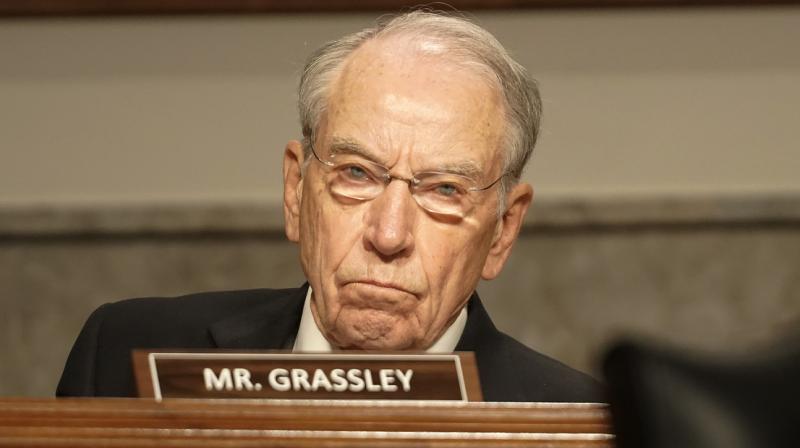 Washington: Countries like China and India have got a lot richer over the last two decades but they have refused to take on any more responsibilities, a top US Senator has claimed, as he applauded President Donald Trump for taking on this "imbalance" to make the World Trade Organization (WTO) relevant.

Senator Chuck Grassley, Chairman of the powerful Senate Finance Committee, made the comments during a Congressional hearing on WTO on Wednesday.

"No one expected the Uruguay Round to be the last global trading round. Over the last two decades, countries like China and India got a lot richer, but they've refused to take on any more responsibilities," he claimed.

"In fact, they claim they are entitled to special treatment in any future negotiations because they are developing countries," he said.

The senator said that the notion that China and India should get the same consideration as a country like Cameroon is ridiculous. "So I applaud the President for taking on this imbalance, and pushing to make the WTO relevant."

Trump last year asked the WTO to define how it designates developing-country status, a move that was apparently aimed at singling out countries like China, Turkey and India which are getting lenient treatment under global trade rules.

In a memorandum, Trump empowered the US Trade Representative (USTR) to start taking punitive actions if any country, advanced economies, are inappropriately taking benefits of the WTO loopholes.

"The WTO is now 25 years old, but we have yet to see any major outcomes liberalising trade. The President has said we need dramatic change at the WTO. He's emphasised to me that other countries' tariffs and barriers are too high. He's right," Grassley said.

Observing that when the WTO works right, Americans benefit, he said WTO rules allow the US to reap the rewards of that leadership.

"When India refused to provide patent protection for American pharmaceutical and agricultural chemical products, we took them to the WTO  and won. You often hear about how important the 'global box office' is for Hollywood. It's become lucrative because the WTO requires our trading partners to provide copyright protection and market access for US films, he said.

Grassley said that the WTO needs to be an effective forum for negotiating agreements again. That means not only concluding the fisheries negotiations, but also new agreements, including an ambitious agreement on e-commerce.

"When Congress ratified the WTO Agreements, there was no digital economy. Today, it accounts for nearly USD 2 trillion of the US economy. Again, this is an area of US leadership where we need rules to make sure we get a fair shake from its trading partners," he added.

"Second, we have to fix dispute settlement. I absolutely believe that we need enforceable rules. It's much better to solve our trade disputes over legal briefs than through tariffs," he said.

"However, WTO dispute settlement has been breaking down for years. Fifteen years ago, I warned at a hearing like this one that the WTO Appellate Body wasn't enforcing rules; it was legislating new ones. I don't like that history proved me right," he added.

Calling for WTO reforms, Ranking Member Senator Ron Wyden said that the rules that underpin the WTO were crafted more than two decades ago, when China was an economic middleweight.

"At that time, many hoped and predicted that joining the WTO would drive China further away from abusive, one-party control of government, economics and society. 'That obviously did not happen," he said.

"Under (Chinese) President Xi (Jinping), the government tightened its grip on power. The Chinese government identifies weaknesses in the WTO system, and other multilateral fora, and it seizes on them to further its own self-interests."

"Fixing the WTO is also going to require addressing its Appellate Body, which hampers the application of US trade enforcement laws to the detriment of American workers. There is a broad bipartisan view that WTO Dispute Settlement must be fixed to clamp down on judicial overreach," he said.