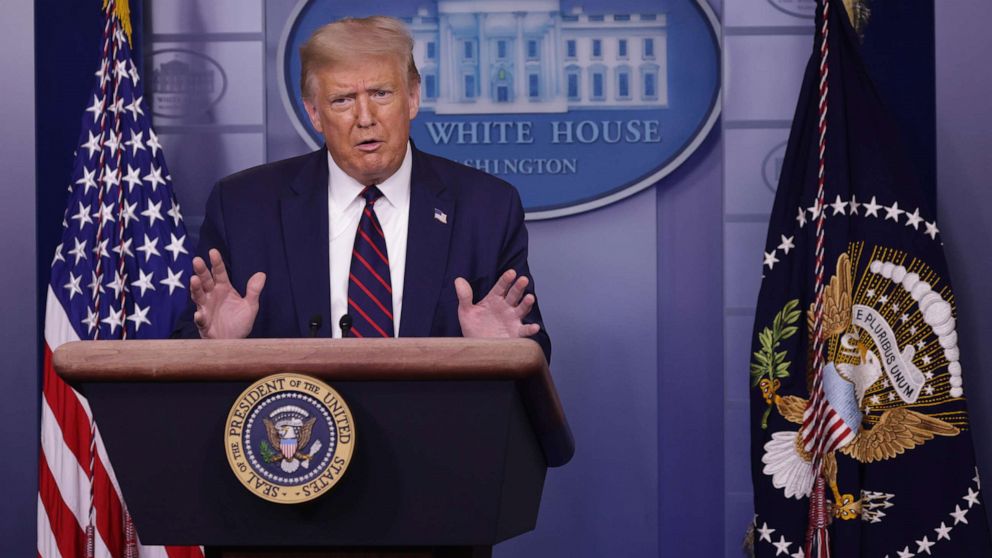 In a remarkable move by a sitting president, Donald Trump for the first time Thursday explicitly floated the idea of delaying the presidential election over his persistent false attacks that mail-in voting would bring about rampant voter fraud.

“With Universal Mail-In Voting (not Absentee Voting, which is good), 2020 will be the most INACCURATE & FRAUDULENT Election in history. It will be a great embarrassment to the USA. Delay the Election until people can properly, securely and safely vote???” a tweet from Thursday morning reads.

Trump, trailing in polls in key battleground states, wouldn’t directly say at a press conference later Thursday if the move was under serious consideration, but he continued to sow doubt in the November election.

Not only have election experts debunked theories of widespread fraud with the use of mail ballots, it is also not within the power of the president to change the date of the election.

While individual states control their own primaries, the date of the general election has been a matter of federal law since 1845, and it would require an act of Congress to delay past the first Tuesday of November. The Constitution also mandates that the president’s term ends on Jan. 20 and the swearing in of the new president and vice president on that same date.

House Speaker Nancy Pelosi citied those rules in a tweet of her own responding to the president.

GOP Senate Majority Leader Mitch McConnell also slapped down the idea, telling WNKY’s Max Winitz in an interview Thursday the date is set and citing past American elections that have taken place during crises.

“Well never in the history of the country through wars, depressions and the Civil War have we ever not had a federally scheduled election on time. And we’ll find a way to do that again this November 3,” McConnell said.

Presidential historian Michael Beschloss was quick to tweet a reminder that there has never been a successful move to “delay the election” for a president.

Trump appears to be the only one floating the extreme measure months out from Election Day.

The Trump campaign even sought to walk back Trump’s initial tweet as just “raising a question” in a statement to ABC News.

“The President is just raising a question about the chaos Democrats have created with their insistence on all mail-in voting,” said Hogan Gidley, Trump 2020 national press secretary.

Later in the day, Trump tweeted that results “must be known on the night of the Election, not days, months, or even years later!”

Trump’s suggestion follows an unfavorable report out Thursday that the U.S. economy contracted at a record-shattering 32.9% last quarter. It also comes amid poor polling numbers on his handling of the deadly coronavirus pandemic and on the same morning of the funeral for late Rep. John Lewis, who devoted his life to voting rights.

Trump in April was asked about delaying the election amid the coronavirus and said, “I never even thought of changing the date of the election.”

“Why would I do that? November 3. It’s a good number. I look forward to that election,” he added at the time.

But Trump’s likely opponent, former Vice President Joe Biden, predicted at an April virtual fundraiser that Trump would try to delay the election.

“Mark my words: I think he is gonna try to kick back the election somehow, come up with some rationale why it can’t be held,” Biden said.

Jared Kushner, Trump’s son-in-law and a senior White House adviser, also didn’t rule out possibly delaying the election when asked in May, saying, “I’m not sure I can commit one way or the other, but right now that’s the plan.”

Though Trump cited mail-in voting fraud as his reason for seeking to delay the election, experts say there isn’t any evidence of widespread fraud with the practice.

“Mail ballot fraud is incredibly rare and legitimate security concerns can be easily addressed,” according to the Brennan Center for Justice at New York University School of Law, a non-partisan law and policy think tank.

Tom Ridge, a Republican who previously served as the governor of Pennsylvania and was the nation’s first secretary of Homeland Security, recently told ABC News, “There is absolutely no antecedent, no factual basis for [President Trump’s] claim of massive fraud in mail voting.”

Even current Trump administration official Christopher Krebs, director of the Department of Homeland Security’s Cybersecurity and Infrastructure Security Agency, said earlier month that an increase in mail-in voting this year could improve election integrity because there will be more paper records.

“Auditability is a key element of being able to determine the integrity of a vote,” Krebs said.

ABC News checked in July with nearly 30 U.S. Secretaries of State, none of whom expressed doubts in their ability to protect the integrity of their state elections.

Those elections officials also expressed confidence that they would be able to effectively carry out expanded mail-in voting in November, despite Trump’s repeated claims of rampant voter fraud.