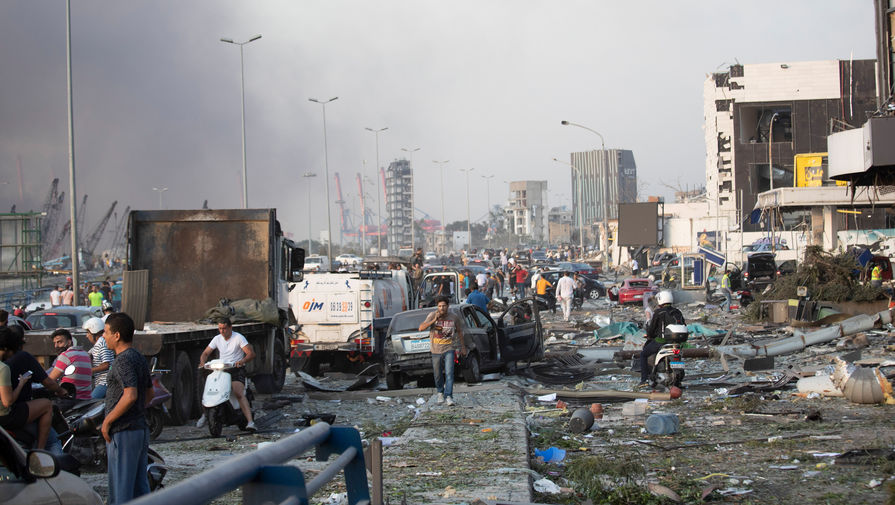 A terrible explosion in the port of Beirut has killed more than 100 people, injured more than four thousand – while hundreds of people remain missing. The media believe that the number of dead will rise – from under the rubble of buildings every hour recovered more bodies. Hospitals overwhelmed the Lebanese capital, the Minister of health of Lebanon Hamad Hassan called the incident “a disaster”.

National mourning is declared in Lebanon on Wednesday, 5 August. According to Reuters, after a powerful explosion in the port of Beirut, the number of victims is growing by the hour – from the wreckage recovered new bodies and wounded.

The Minister Hamad Hassan said that many people were missing, and the real number of victims will be more. The expense is affected by thousands of hospitals Beirut are crowded, many of the medical institutions severely damaged in the explosion. According to the latest data, injured more than 4 thousand people.

“We are faced with a disaster, and we need time to assess the extent of the damage,” said Hassan. At the same time, the U.S. Embassy in Beirut urged all who were in the area of the explosion to remain indoors and to wear masks – it was reported emissions of toxic gases as a result of the incident.

The blast damaged buildings throughout the city, including the official residence of the Lebanese leadership. The force of the explosion indicates that the front of the Mall, located two kilometers from the epicenter, was completely destroyed.

Prime Minister Hassan Diab said that exploded, most likely, 2750 tons of ammonium nitrate, ammonium nitrate – an explosive material that is used for the manufacture of fertilizer and bombs.

Huge stock of ammonium nitrate were stored in Beirut port from 2014, measures of control and security were not observed. The head of the government of Lebanon has emphasized that such storage of hazardous materials “unacceptable” and asked for 5 days to investigate the cause of the explosion.

Hundreds of thousands of people every day passed the “powder keg”, taking a walk through Beirut and visiting shops near the port. The infrastructure of the Harbor is completely destroyed – before the explosion, the port could take a year, about 3 thousand ships, there are 16 berths, loading and unloading areas, as well as a naval base, the Lebanese Navy.

The national security service of Lebanon launched an investigation due to the presence in the port of Beirut nitrate even six months ago, told Lebanese TV channel OTV, citing sources. The explosives were on Board the ship under the flag of one of the countries of Africa, the vessel was abandoned at the port of his masters due to a large debt.

As one of the measures the service of the Lebanese national security proposed the creation of special storage conditions this nitrate.

“In the absence of the need for them has been asked to sell these substances”, — stated in the message channel. The Governor of Beirut, Marwan Abboud after a powerful explosion in the port city remembered about the American nuclear strike on the Japanese cities of Hiroshima and Nagasaki in 1945. According to him, suffered “half the city”. Beirut blast media compared to the use of tactical nuclear weapons.

The explosion damaged the building of the trade mission of the Russian Federation – it is located a few kilometers from the port. Residential apartments of the Embassy and shattered Windows and balcony doors. The employee of the Russian Embassy in Lebanon was injured in the explosion, her life is out of danger – she was hurt the broken glass.
Such “minor” cases throughout Beirut there are at least dozens.

Jordan seismological Observatory concluded that the explosion in the port of Beirut was equal in strength to the earthquake of magnitude 4.5. For comparison, the infamous Spitak earthquake, which destroyed Northern Armenia in 1988, had a magnitude of 6.8 to 7.2. Then killed about 25 thousand people received disability 140 thousand inhabitants of the region.

The explosion in the port of Beirut sparked international reaction. First, Israel rejected the assumption that its warplanes had struck the ship. The President of the United States Donald trump stated that he met with the generals who believe the blast “attack.”

According to the American leader, according to the nature of the explosion that happened in Beirut was like an assault. The US President said that the incident is “kind of production explosion.”

The President of France Emmanuel macron, in turn, said that Lebanon will be sent a detachment of the civil defence forces and several tons of medical supplies.

Russian leader Vladimir Putin sent condolences to President of Lebanon, Michel Aoun. “Russia shares the grief of the Lebanese people,” – said the Russian President, and wished the injured a speedy recovery and words of support to the families of the victims.