At least 100 people have been killed, 4,000 injured and dozens of buildings damaged after a massive explosion ripped through Beirut’s port and surrounding area.

Lebanon is reeling from the extensive damage caused by the explosion on Tuesday evening, with the port area flattened and buildings further into the city’s residential neighbourhoods damaged. Efforts to treat the injured have been hampered by the fact that hospitals are among the damaged buildings.

Lebanon president, Michel Aoun, said 2,750 tonnes of ammonium nitrate had been stored unsafely in a warehouse for six years. After an initial blast and fire in the port, it is thought that this was the cause of a second blast, with a massive fireball and white cloud sending a shockwave across the city.

Shop and apartment windows were blown out as far away as two miles (3.2 km) from the port, littering the streets with broken glass and causing hundreds of injuries.

In the port itself, several warehouses were completely flattened. These include grain silos, which are thought to have stored around 85% of the country’s grain.

Video footage shows buildings next to the port area taking heavy damage as the shockwave spread through the city.

Beirut’s governor has said that the blast damage extends to over half of the city, and that up to 300,000 people have been left homeless.

Before and after: drone footage shows devastation caused by Beirut explosion – video

Rescue teams are searching through debris in several neighbourhoods for missing people, while hospitals are overwhelmed with dealing with thousands of injured.

Damage has been confirmed as far away as Beirut airport, six miles (9.5 km) from the blast site. A similar explosion in central London would see damage extend to the areas of Wood Green, Stratford and Forest Hill while the Bronx would have been affected if this happened in central Manhattan.

The impact of the explosion can be gauged from aerial images showing the port before and after the blast. A chunk is missing from the quay where the explosion took place and the immediate surrounding area appears almost entirely razed. 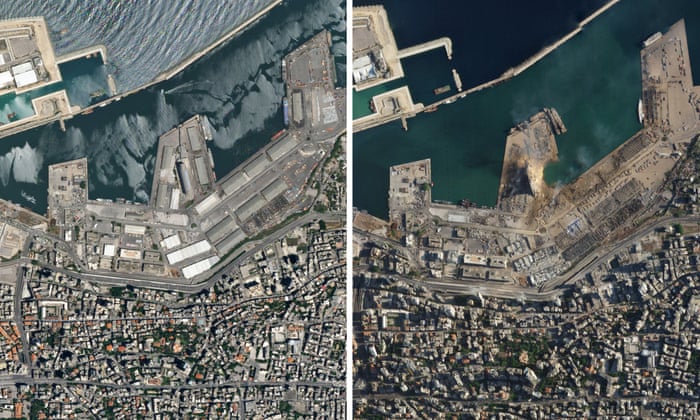 A closer view taken from a drone shows the smouldering remains of obliterated buildings, with water filling a crater where the quayside was destroyed.

Drone footage of obliterated buildings at port of Beirut

The destructive range of the explosion can seen in damage to an entertainment venue more than 1km across the harbour from the blast site.