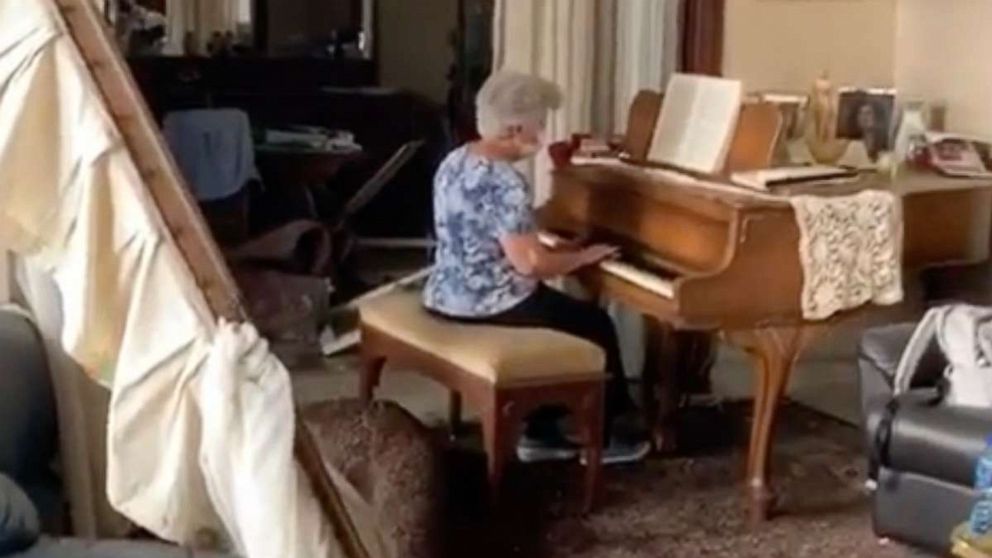 Surrounded by debris after a devastating explosion in Lebanon’s capital city of Beirut, May Abboud Melki sat and played “Auld Lang Syne” for her family on a piano in her home.

Meliki’s song was seen by some as a sign of hope and resilience amid the rubble. Her granddaughter, May-Lee Meliki, described the moment as “beauty from ashes,” and said her grandmother was “pushing through her pain.”

May-Lee Meliki shared the now viral moment on Instagram, where many people have left comments in support of those in Lebanon.

The heartbreaking moment was captured less than a day after over 2,700 tons of ammonium nitrate, a highly explosive substance, caused a blast that killed at least 135 people and injured more than 5,000 others, according to the latest figures released by Lebanon Health Minister Hamad Hassan.

At least one U.S. citizen was killed in the explosion, and several others have been injured, a U.S. State Department spokesperson told ABC News.

While many others still remain missing, the enormous explosion, which leveled a portion of the city, has left 300,000 people homeless, said Beirut’s Governor Marwan Abboud.

Authorities are currently investigating the explosion, saying that the exact cause of the blast still remains unknown.

Lebanon’s President Michel Aoun announced that an unspecified number of people who managed the warehouse where the ammonium nitrate was stored will be put under house arrest.

During a virtual appearance at the Aspen Security Forum on Wednesday, U.S. Defense Secretary Mark Esper said that there is still information coming in about the explosion, but that “most believe it was an accident, as reported.”

The Lebanese Red Cross has made a series of urgent appeals for blood donations after they sent 75 ambulances and 375 paramedics to the scene. Search and rescue teams continued to look for missing people around the site on Wednesday, ABC News reported.