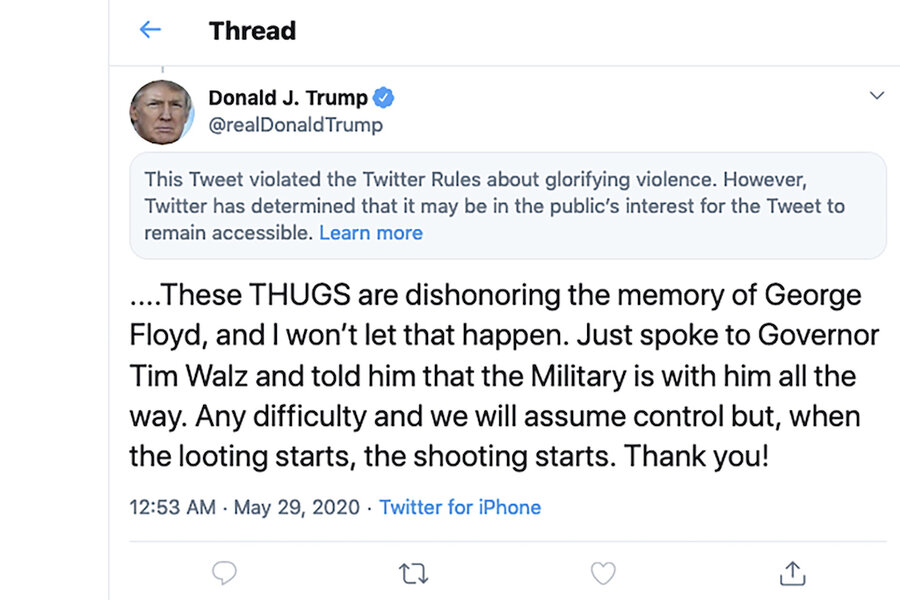 Twitter has added a warning to one of President Donald Trump’s tweets about protests in Minneapolis, saying it violated the platform’s rules about “glorifying violence.”

Mr. Trump, a prolific Twitter user, has been at war with the company since earlier this week, when it for the first time applied fact-checks to two of his tweets. Those were about mail-in ballots.

The third tweet to be flagged came amid days of violent protests over the death of George Floyd, a handcuffed black man who pleaded for air as a white police officer kneeled on his neck.

“These THUGS are dishonoring the memory of George Floyd, and I won’t let that happen,” Mr. Trump tweeted about the protesters. “Just spoke to Governor Tim Walz and told him that the Military is with him all the way. Any difficulty and we will assume control but, when the looting starts, the shooting starts. Thank you!”

The phrase echoes a 1967 statement made by the late Miami Police Chief Walter Headley during U.S. race riots in the 1960s. ‘We haven’t had any serious problems with civil uprising and looting,’ Headley said at a December 1967 news conference The New York Times reported at the time, ‘because I’ve let the word filter down that when the looting starts, the shooting starts.’

‘We don’t mind being accused of police brutality,’ Headley noted. ‘They haven’t seen anything yet.'”

Twitter did not remove the tweet, saying it had determined it might be in the public interest to have it remain accessible. It does that only for tweets by elected and government officials. But the tweet was hidden so that a user looking at Mr. Trump’s timeline would have to click on the warning to see the original tweet.

“We’ve taken action in the interest of preventing others from being inspired to commit violent acts, but have kept the Tweet on Twitter because it is important that the public still be able to see the Tweet given its relevance to ongoing matters of public importance,” Twitter said on its communications account.

The earlier tweets that Twitter flagged were not hidden but did come with an option to “get the facts about mail-in ballots,” a link that led to fact-checks and news stories by media organizations. Those tweets called mail-in ballots “fraudulent” and predicted that “mail boxes will be robbed,” among other things.

Twitter’s decision to flag Mr. Trump’s tweets came as the president continued to use the platform to push a debunked conspiracy theory accusing MSNBC host and former congressman Joe Scarborough of killing a staffer in his Florida congressional office in 2001. Medical officials determined the staffer had an undiagnosed heart condition, passed out, and hit her head as she fell.

Mr. Scarborough, who was in Washington, not Florida, at the time, has urged the president to stop his baseless attacks. The staffer’s husband also recently demanded that Twitter remove the tweets. The company issued a statement expressing its regret to the husband but so far has taken no other action.

On Thursday, Mr. Trump targeted Twitter and other social media companies by signing an executive order challenging the laws that generally protect them from liability for material users post on their platforms.

The order directs executive branch agencies to ask independent rule-making agencies including the Federal Communications Commission and the Federal Trade Commission to study whether they can place new regulations on the companies, though experts express doubts much can be done without an act of Congress.

The president and fellow conservatives have claimed for years that Silicon Valley tech companies are biased against them. But there is no evidence for this, and while the executives and many employees of Twitter, Facebook, and Google may lean liberal, the companies have stressed they have no business interest in favoring one political party over the other.