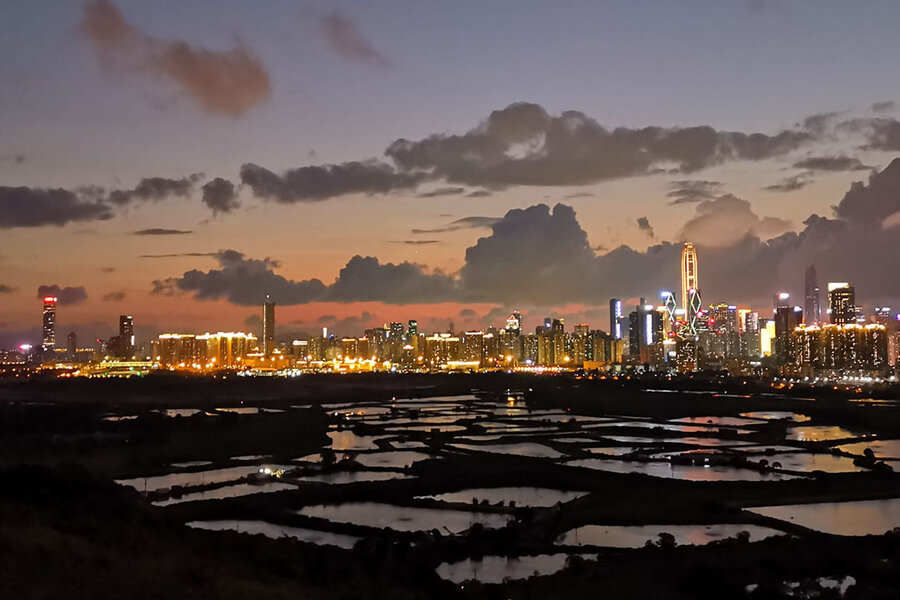 The rescue is unusual for Hong Kong, which has long had a laissez-faire market system in which economic growth has taken priority over welfare. Yet amid a deepening recession caused by the pandemic and social unrest, in February, the government announced a $120 billion stimulus package. This broke with a pattern of fiscal conservatism, causing the first budget deficit in 15 years. The relief package includes slashed taxes on income and profits, and – the centerpiece – the $10,000 cash handout for all residents who are 18 and older.

Together with Mr. Chan’s resourcefulness, this support has so far allowed him to make ends meet.

“I think our business may start again next year, so we still keep our staff at the moment,” says Mr. Chan. Indeed, many Hong Kong employers – even in hard-hit industries such as tourism, food, and retail, where unemployment rose to 10.6% this spring – are taking advantage of government incentives to retain workers.

Overall unemployment in Hong Kong has increased from 5.2% earlier this year to 5.9% in May, the highest in 15 years, according to government data. Still, it is unlikely to reach the 8% high of the 2003 SARS epidemic, says Simon Lee, senior lecturer in the School of Accountancy at the Chinese University of Hong Kong.

“Many companies learned the lesson [during SARS]. If they fire staff, it’s hard to get them back,” says Mr. Lee. “So they may ask the employee to take leave without pay, or to work only one or two days a week.”

Mr. Chan has been able to retain his staff, thanks in part to two government lump-sum payments to travel agencies – the first for $80,000 and the second for $20,000-200,000, depending on the size of the firm. And beginning in June, the government began paying 50% of the salaries of each of his employees for six months.

Hong Kong’s $10,000 cash handout to residents also helps his employees, Mr. Chan says.  While less significant for Hong Kong’s middle class – the territory’s median income is $18,000 a month – the payment is badly needed by the more than 1 million people in Hong Kong considered poor in 2018, or 15% of the population, says the senior lecturer, Mr. Lee. He favors a handout of $20,000 or $30,000, to add greater economic stimulus.

Indeed, Mr. Chan and others working across Hong Kong’s large tourism sector, which includes about 300 hotels, are hopeful the handout will bring more spending by residents. For example, large hotels such as the five-star Hyatt Regency Hong Kong in Sha Tin, located in the vast suburban and rural northern swath of Hong Kong known as the New Territories, are offering “staycations” for families stranded in Hong Kong during the summer holidays.

Overlooking Tolo Harbor and surrounded by mountains, country parks, and hiking and bicycle trails, the Hyatt is offering creative packages such as “suite staycations” for families, says Wilson Lee, the hotel’s general manager.

“Most Hong Kong kids are city kids,” says Mr. Lee. To re-create a camping environment, the hotel is putting up tents inside the rooms, complete with a picnic basket of healthy snacks, so “the children can squeeze into the tent in the suite and enjoy the experience.”

The Hyatt is also preparing to roll out a “summer academy” offering “edutainment” classes ranging from fencing and taekwondo to computer coding and the pear-shaped Chinese lute, or pipa.

The Hyatt must no longer ask employees to take unpaid leave, says Mr. Lee. “Occupancy in every hotel is not high, but we are keeping our people. It’s not just the people working here, but the families they have to look after,” he says. “We have the duty to keep it going.”

For his part, Mr. Chan is also hopeful that the handout will generate customers for his innovative “green” tours, creating work not only for his employees but also for local coach drivers, restaurants, and tour guides.

“We have a subsidy, so we can make the tour price very low,” says Mr. Chan, speaking by phone as he pauses among tall reeds in the marshy wetlands of Ma Tso Lung near the China border.

Travel agents receive a government cash incentive of $200 for each resident for whom they arrange a “green lifestyle” tour to a local “green spot” such as the territory’s wetlands, beaches, outlying islands, and country parks, with a guide, meal, and transportation.

Mr. Chan hopes to arrange 20 bus tours for 50 people each – the maximum number allowed to gather, under COVID-19 restrictions – to max-out the government’s cap on subsidies of 1,000 tours per travel agent. It’s not much, and he’s only promoting the tours by word of mouth. Still, given these extraordinary times, he says, “it’s quite attractive.”