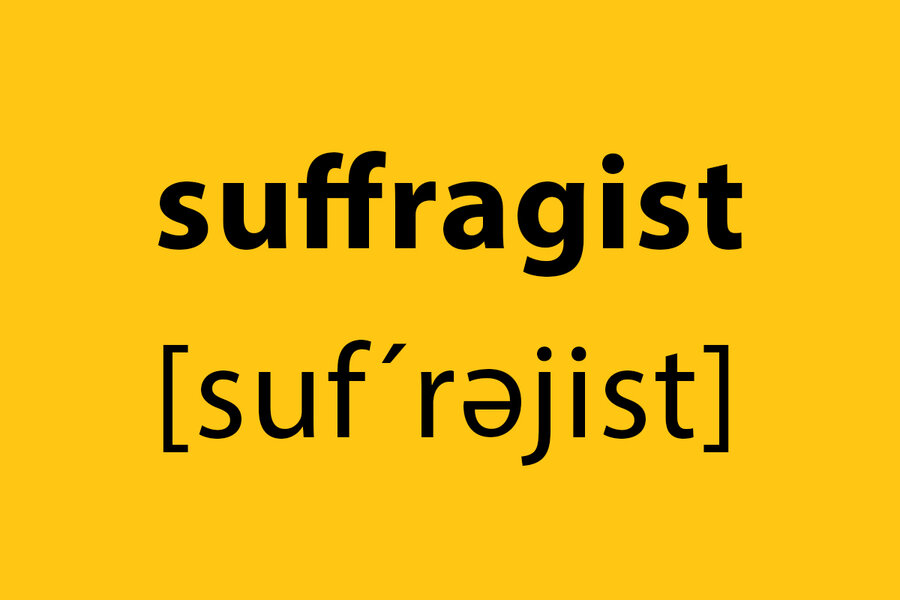 In 2019, Democratic congresswomen wore white to the State of the Union address to honor the women who had fought for the right to vote and to highlight the progress that still needs to be made toward legal equality. Early 20th-century campaigners would often dress in white, a traditional symbol of female purity, to call attention to their cause. In this online age, the congresswomen used the hashtag #suffragettewhite.

It is ironic that suffragette has become such a widely used term, since most of the women who campaigned for suffrage preferred the gender-neutral suffragist. Suffragette was coined in 1906 by a (male) journalist in order to mock the “militant” members of the Women’s Social and Political Union (WSPU) in Britain, who went on hunger strikes and chained themselves to railings.

As a demeaning term, suffragette was effective. The diminutive suffix -ette implies small (kitchenette), imitation (leatherette), and cute (imagine the Radio City Rockets instead of the Rockettes). The women of the WSPU turned the word into a rallying cry, however. They referred to themselves proudly as “suffragettes” and renamed their newspaper The Suffragette. Most American campaigners, leery of what some regarded as WSPU’s aggressive methods, preferred suffragist.

The -ette suffix did not die out when women finally won the right to vote. Instead, its use multiplied as they joined the workforce in larger numbers. When Congress created the Navy Women’s Reserve during World War II, newspapers reported it as “Roosevelt Signs ‘Sailorette’ Bill” (Topeka Capital, July 31, 1942). In the same year, a magazine noted that Chicago had hired female police officers: “Chicago tries ‘Copettes.’”

Today -ette is no longer a productive suffix, according to the Oxford online dictionary, except when used in a “deliberately flippant” or “humorous” way – some female supporters of President Donald Trump call themselves “Trumpettes,” for example.

The synonymous suffix -ess is falling out of use as well. Movie stars are actors today regardless of gender. Waiters and waitresses have both become servers; stewards and stewardesses are flight attendants. While -ess is less openly belittling than -ette, it serves the same pernicious function; it implies that the default person in the role is male, and a woman is noteworthy and less qualified.

Today, we refer to people engaged in a cause as activists, whatever their gender. The use of gendered diminutives is dying out, thanks to the protest movements set in motion by the suffragists.