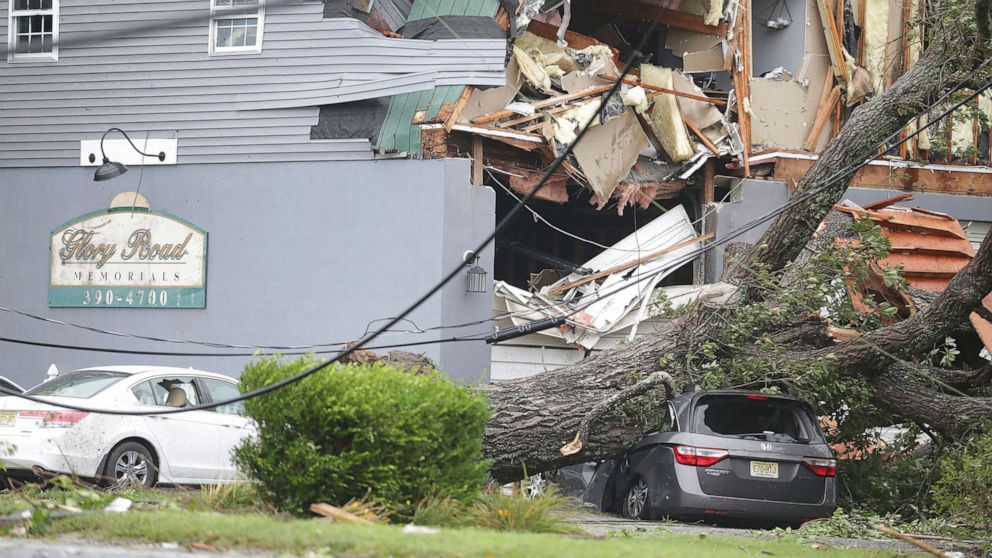 In its path up the East Coast, the storm has battered New Jersey, New York, Virginia, Maryland and Pennsylvania with heavy rain, flooding, tornadoes and rough winds.

One person in Maryland, one in Connecticut, one in New York and two others in North Carolina have died as a result of the storm.

At least 21 tornadoes were reported from North Carolina to New Jersey.

Here is a breakdown by region:

“Do not be on the roads unless absolutely necessary,” he tweeted.

New Jersey Transit was suspended as of midday Tuesday.

Early Tuesday, some streets in the Philadelphia suburb of Bryn Mawr looked like a river.

A flood warning was in effect for New Castle County through 8 p.m. Tuesday.

In coastal St. Mary’s County, Maryland, a driver was killed Tuesday morning when a massive tree fell on the car, according to the county sheriff’s office. The Rehoboth Fire Department said it responded to a man trapped underneath a tree in his yard. Officials said the man was brought to the hospital but did not have an update on his condition.

One driver was taken to the hospital, police said.

A man was killed in the New York City borough of Queens when a downed tree crushed his car, New York ABC station WABC reported.

Only underground subways were operating Tuesday afternoon. Outdoor stations were closed due to high winds.

Isaias made landfall in North Carolina as a Category 1 hurricane around 11 p.m. Monday, lashing the coastline and leaving a trail of damage in its wake.

At least two people in North Carolina died as a result of the storm, according to Raleigh ABC station WTVD.

“All in all, this storm got in, got out pretty quickly and that’s a good sign for potential river flooding which we hope will not be serious,” North Carolina Gov. Roy Cooper told “Good Morning America” Tuesday. “The damage was not in any way as great as it could have been.”

In South Carolina, storm surge caused streets to turn to rivers, homes to flood and cars to end up buried under sand.

As of 8 p.m., the center of the storm was near Rutland, Vermont, moving northeast with sustained winds of about 50 mph with higher gusts.

By 11 p.m. Isaias will head into Canada, leaving lingering rain and wind in Maine.

The storm is expected to continue to weaken, becoming post-tropical later Tuesday night or early Wednesday.