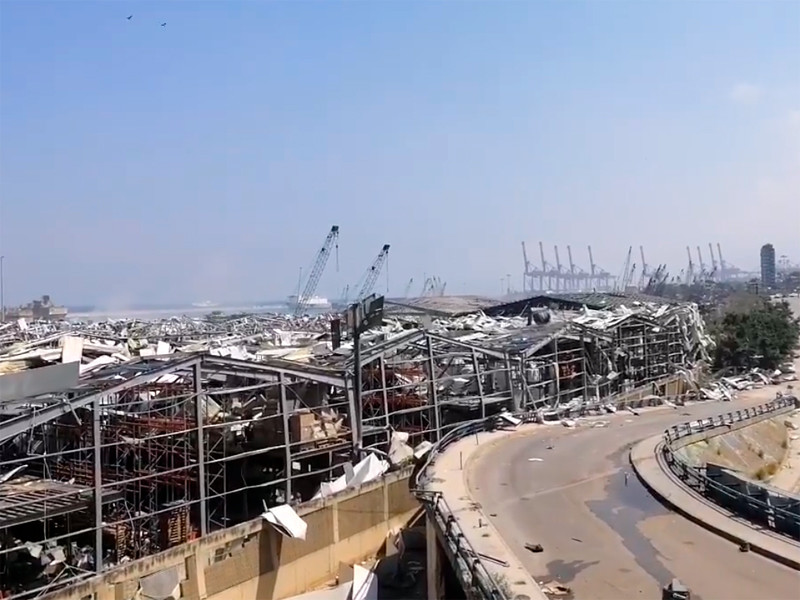 Also the representative of the Ministry explained that the Sukhoi Superjet 100 aircraft was taken to Beirut, “a task force of 10 people, 19 specialists of group “Tsentrospas” and two psychologists of the MOE to assist the victims of the explosion in the port”.

Later became aware of the landing of the second aircraft from Russia. “At 22:05 GMT Beirut, landed the plane Il-76”, – the Ministry said. He was taken to the specialists of Rospotrebnadzor, as well as the necessary equipment to deploy the laboratory for the identification of new coronavirus infection.

Only in Lebanon sent five planes. They will be delivered to 150 Russian specialists. They will all be equipped with special suits and protection equipment, taking into account the epidemiological situation at COVID-19.

In Beirut will be deployed mobile hospital of the squad “Centrospas”, which is a day outpatient can take 200 injured, and a hospital designed for 50 people.

A series of explosions occurred in the port area of the Lebanese capital on August 4. The blast destroyed a large number of buildings, shattered Windows and doors. The damaged building of the international airport. The echo of the explosions was felt even in Cyprus. 300 thousand people were left homeless. 135 people died, said Wednesday the Minister of health of Lebanon Hamad Hassan. About five thousand people were injured. Dozens of citizens went missing, RIA “Novosti”.

Hospitals of the capital are overcrowded victims. The lack of equipment, medicines, residents encouraged to donate blood. Some hospitals are experiencing problems due to intermittent problems with electricity and query generators.

The explosion destroyed the port, despite the efforts of firefighters periodically recorded new pockets of fire. In the country the mourning is declared, Beirut declared disaster area for two weeks, the city declared a state of emergency.

The Lebanese authorities stated that the cause powerful explosions in the port area of Beirut 2,750 tons of steel stored in the warehouse of ammonium nitrate seized by the customs service six years ago with ships of the Russian ship owner.

The UN is ready to provide financial assistance

The United Nations is working to provide urgent medical assistance to the victims of the explosion in Beirut, as well as the assessment of General damages. This was stated on Wednesday by Deputy official representative of UN Secretary General Farhan Haq.

“The UN is working together with the Lebanese authorities to provide all necessary aid, especially urgent care, he said. – Who is working with the MoH to assess the capacity of the hospitals in Beirut and you need more assistance, particularly given the pandemic coronavirus”.

Haq did not rule out the possibility that Lebanon will require additional financial support. “The UN is considering all options to provide additional financing, he said. The organization works together with NGOs and the government of Lebanon to coordinate aid.”

Are under evaluation now needed food aid, as well as arranging temporary housing, said the representative of the Secretary General.

About 100 UN staff were injured in the explosion in Beirut killed two members of their families, said Huck. “Due to the explosion of one of the vessels of the UN mission in Lebanon (UNIFIL) was damaged, some peacekeepers seriously injured. They were taken to the hospital,” he explained.

Who was sent to Lebanon medical facilities

The world health organization (who) has sent to Lebanon from warehouses in Dubai treatment for injuries and surgical supplies to help the victims in the explosion in Beirut. This was announced Wednesday at a press briefing in Geneva program Director of this organization, emergency health Michael Ryan.

“Our teams are in place. A group from our office in the country is in place. Our experts in logistics and other specialists,” – said the Director. He thanked the United Arab Emirates airline for free transportation of medical supplies to Lebanon.

According to Ryan, the group of experts of the who emergency assistance are also ready to immediately go to the Beirut and can be placed in the country, if there is a request from Lebanon. Who works closely with the International Federation of red cross and red Crescent societies, reports TASS.

Ryan called the incident in Beirut “shocking event”, stressing that many hospitals full of the wounded. “This is a very sad day. We stand in solidarity with the people of Lebanon, and we are the who and the UN system will do everything possible to support them”, – summed up the Director of the program of the organization.

Qatar has opened an airlift to Beirut

Qatar has opened an air bridge for aid to Lebanon after a devastating explosion in Beirut and going during the day to send three more planes with humanitarian cargo. This was announced on Wednesday the TV channel Al Jazeera.

“Today, Lebanon still arriving three aircraft in the framework of the air bridge, which will provide medical assistance to the victims of the explosion in Beirut port”, – stated in the message channel.

Earlier in the day in the Lebanese capital, came the first military transport aircraft of the Qatari air force, which brought the two field hospital. They must be deployed in the near future in two areas of Beirut.

The UK will provide an initial aid package to Lebanon to $ 5 million pounds (6,55 million dollars). This was stated on Wednesday by the British foreign Secretary Dominic Raab, answering questions after a telephone conversation with Prime Minister of Lebanon Hassan Diab.

“We will provide immediate assistance and aid package, which will include conducting search and rescue operations, humanitarian assistance amounting to 5 million pounds, as well as expert medical care”, – said the Minister.

Dominic Raab added that “the region is the hydrographic ship of the Navy of great Britain”, the crew of which may be used to conduct damage assessment in port.

The Minister also said that he could not at the moment to give the exact number of Brits who were injured in the explosion.