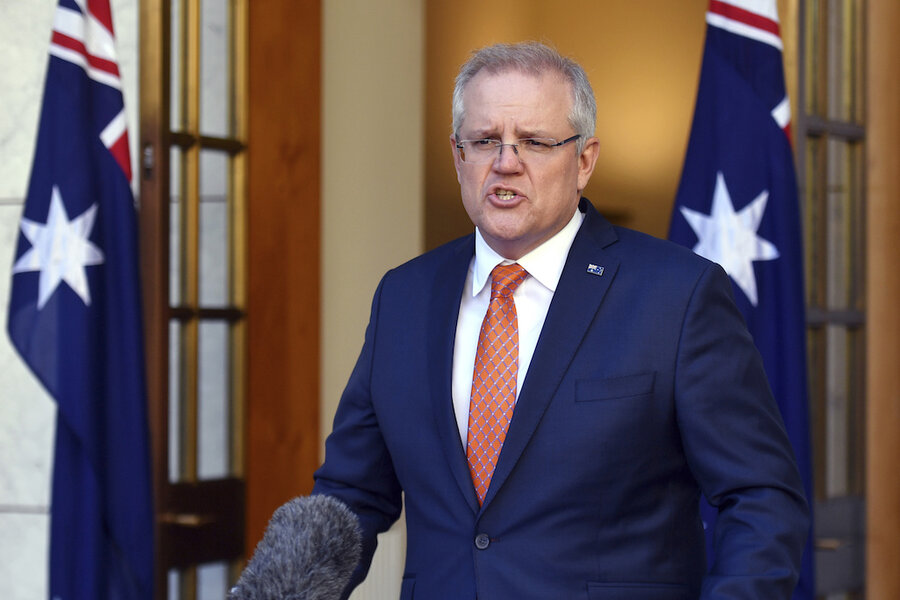 Australia suspended its extradition treaty with Hong Kong and extended visas for Hong Kong residents in response to China’s imposition of a tough national security law on the semi-autonomous territory, the prime minister said Thursday.

Prime Minister Scott Morrison announced a range of visas that will be extended from two to five years and offers of pathways to permanent residency visas. It is not clear how many Hong Kongers are expected to get the extensions.

The move comes after China bypassed Hong Kong’s Legislative Council to impose the sweeping security legislation without public consultation. Critics view it as a further deterioration of freedoms promised to the former British colony, in response to last year’s massive protests calling for greater democracy and more police accountability.

The national security law prohibits what Beijing views as secessionist, subversive, or terrorist activities or as foreign intervention in Hong Kong affairs. Under the law, police now have sweeping powers to conduct searches without warrants and order internet service providers and platforms to remove messages deemed to be in violation of the legislation.

“Our government, together with other governments around the world, have been very consistent in expressing our concerns about the imposition of the national security law on Hong Kong,” Mr. Morrison told reporters.

“That national security law constitutes a fundamental change of circumstances in respect to our extradition agreement with Hong Kong,” he said.

The Chinese Embassy in Canberra accused Australia of a “serious violation of international law and basic norms governing international relations.”

“We urge the Australian side to immediately stop meddling in Hong Kong affairs and China’s internal affairs,” an embassy statement said. “Otherwise it will lead to nothing but lifting a rock only to hit its own feet.”

“The consequences will be fully borne by Australia,” Mr. Zhao told reporters at a daily briefing.

China, Australia’s most important trade partner, has already imposed effective import bans on beef and barley from the country and issued a travel warning to its citizens in what was widely seen as political retaliation over legal and other matters.

Britain, too, is extending residency rights for up to 3 million Hong Kongers eligible for British National Overseas passports, allowing them to live and work in the U.K. for five years.

Canada has suspended its extradition treaty with Hong Kong and is looking at other options including migration.

In Australia, the most likely Hong Kongers to benefit from the new policies are the 10,000 already in the country on student and other temporary visas.

Acting Immigration Minister Alan Tudge said he expected the numbers of Kong Hongers who would come to Australia under the new arrangements would be “in the hundreds or low thousands.”

Australia last offered “safe haven” visas to Chinese after the bloody crackdown on pro-democracy protesters around Beijing’s Tiananmen Square in 1989. More than 27,000 Chinese students in Australia at the time were allowed to stay permanently.

Global Times, a Chinese Communist Party mouthpieces, this week warned that “no one should underestimate the repercussions to the Australian economy from a further deterioration of bilateral ties.”

“If the Australian government chooses to continue to interfere in China’s internal affairs, it should be expected that the ‘safe haven’ offer will result in a huge negative impact on the Australian economy, making the issue much more serious than many people would have anticipated,” the newspaper said.

China accused Australia of spreading disinformation when the Department of Foreign Affairs and Trade issued a travel advisory this week warning that Australian visitors could be at risk of arbitrary detention.

The department’s latest advisory for Hong Kong on Thursday warned that visitors could be sent to mainland China to be prosecuted under mainland law.

“You may be at increased risk of detention on vaguely defined national security grounds,” the advisory said. “You could break the law without intending to.”

Australia had negotiated an extradition treaty with China, but shelved it in 2017 when it became clear that the Australian Senate would vote it down. The separate Hong Kong treaty has been in place since 1993.