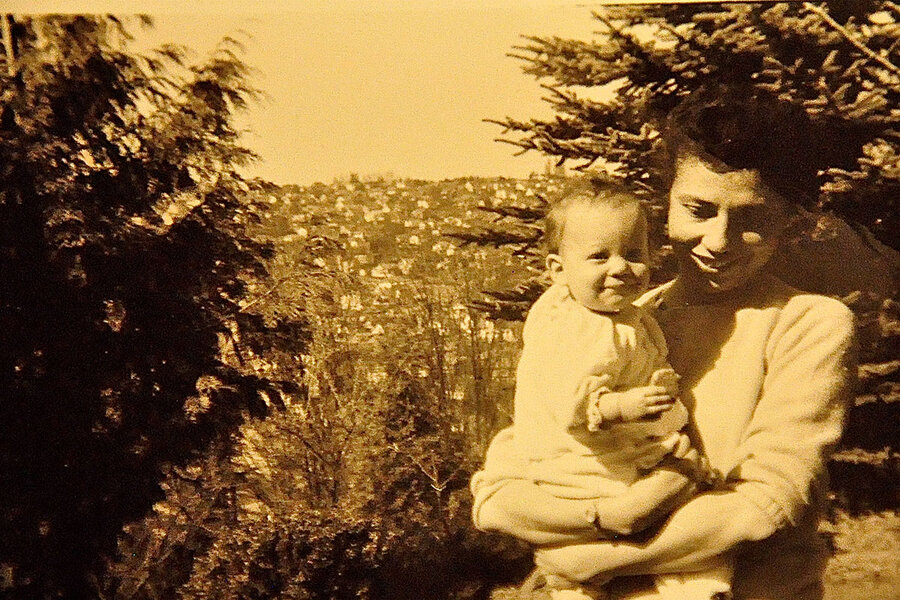 I was not quite 3 that spring, when Mom and I took a memorable walk around our neighborhood in Seattle. Just after we turned onto the street with the short but steep hill, heading for home, Mom did something outlandish.

I’d never seen anyone walk backward before, but clearly it was awkward and ridiculous. Yet here was Mom walking backward with a bouncing step, looking me in the eyes and smiling – even as we climbed the hill.

Call Mom’s behavior a quirk if you will. I had my own. When first toilet trained, I sat backward on the commode, fearing that I might otherwise fall in. Shirt tags, I thought, belonged in the front, not the back – they should lead, not follow. And I refused to wear what I called “button shirts.” Whenever I found a pine cone – and they were plentiful in our yard – I would put it on the rear-window ledge of our Studebaker. And I always sat on the right-hand side of the back seat. For that, Mom dubbed me “David Doorside.”

Mom indulged me, letting me sit however and wherever I wished. The pine cones were allowed to stay. Upon my second request, she even removed the tags from the backs of my shirts and sewed them onto the inside of the fronts.

Though I’d always been able to conjure the memory of Mom walking backward, along with the irritation that had suffused me, I could not recall the route we’d taken on that day. I turned to Google Maps to try to figure it out. To my surprise, the curve of one street, East Florence Court, evoked a misty memory of enchanted houses and pretty flowers. Google Maps’ photo of it filled out that memory. Even now that lane remains enchanted – like Fairyland in Oakland, California, where we’d visit several months hence.

Of course Mom would have led me down East Florence Court, just as she would take us to Fairyland, and just as it was her idea for us to live in Paris the year I was 12. She was the adventurous parent with the aesthetic sensibilities.

It was also Mom who, many years later, was grinning ear to ear in the passenger seat of my sporty car after I’d finally caught up with the bulbous, clownish AMC Pacer I’d turned around to chase on a narrow, twisty Cape Cod byway in order to photograph it. My mother was a thrill seeker.

As thrills go, walking backward may have been tame, but Mom had this big smile on her face, like she’d made a great discovery. Peering back from the vantage of six decades later, I suspect that her feet weren’t quite touching the sidewalk. Rather, in her mind, she was gliding just above its surface, as when she’d ice skate backward – quite gracefully – after our family moved to Boston.

Seattle may have been the best time of her life. Our family of four lived in our first house, atop one of Seattle’s many hills, in a leafy neighborhood of streets so narrow they forced cars to a crawl. She was a brilliant Ph.D. student in clinical psychology at the University of Washington, where my father taught economics.

Looking back, I think her interest in walking backward went far deeper than the kinesthetic. Now face-to-face with her finicky son, she was trying to engage me, as if this new way of walking could bring us closer together – something I didn’t appreciate until I pored extensively over this memory. Her eyes were bright, her face mobile with excitement, her arms gesticulating as she chattered and offered up questions, their content lost to the years. How I wish I could ask her about that walk! She’d remember.

I, in turn, was behaving like a car that refuses to start. I was irritated at her violation of the natural order. When I tell her to walk normally, she proffers an invitation to be adventurous and to open myself to a new perspective – which was lost on my toddler self.

But all these years later, her question brings a broad smile to my face. “Why don’t you try walking backward?” she says.