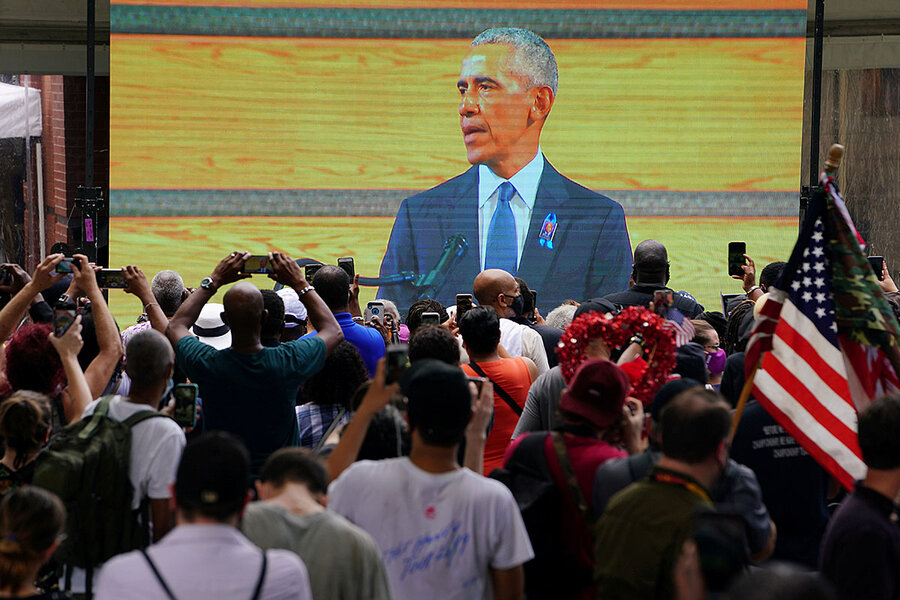 With some fanfare, former President Barack Obama issued his first round of down-ballot endorsements this week – 118 candidates in 17 states, including 51 candidates for the U.S. House and five U.S. Senate candidates.

Until recently, President Obama has kept relatively quiet on political matters, following the traditional behavior of ex-presidents toward their successors. But with three months to go before Election Day, he’s speaking up more.

His eulogy last Thursday for civil-rights icon John Lewis, the longtime Georgia Democratic congressman, honored a man who devoted his life to the cause of racial equality – and helped pave the way for Mr. Obama himself to become the nation’s first Black president.

Just as significantly, the speech delved into politics, as a tool for effecting change. Mr. Obama called for measures to enhance voting rights, and, controversially, raised ending the filibuster – a Senate rule that effectively requires 60 votes to pass legislation – to bring about reforms.

The former president called on Americans to carry on Representative Lewis’s legacy by voting. “He knew that the march is not yet over,” Mr. Obama said.

Mr. Obama is central to party efforts to spur turnout for his former vice president, Democratic nominee Joe Biden. And inspiring Black voters is key. But a recent American University survey of Black Americans in six swing states identified potential trouble: Those under age 30 have far less enthusiasm for Mr. Biden than their elders.

If Mr. Biden does win, he’ll need Democratic majorities in both Houses of Congress to enact his agenda. Which brings us back to Mr. Obama’s efforts to elect more Democrats down-ballot. Mr. Obama’s endorsements focus on holding and building on Democratic gains in the House in 2018, and then helping the party win control of the Senate. There, Mr. Obama endorses Democrats taking on Republican incumbents in Colorado, Iowa, Maine, North Carolina, and South Carolina.

He also endorses dozens of Democrats running for state legislatures, with an eye toward fighting partisan gerrymandering as states redraw legislative districts after the 2020 Census.

How much sway do endorsements actually have? Usually not much. But Mr. Obama remains a popular figure in the party. And between now and Election Day, anybody who can rally Democratic voters – even just virtually – will be giving it all they’ve got.