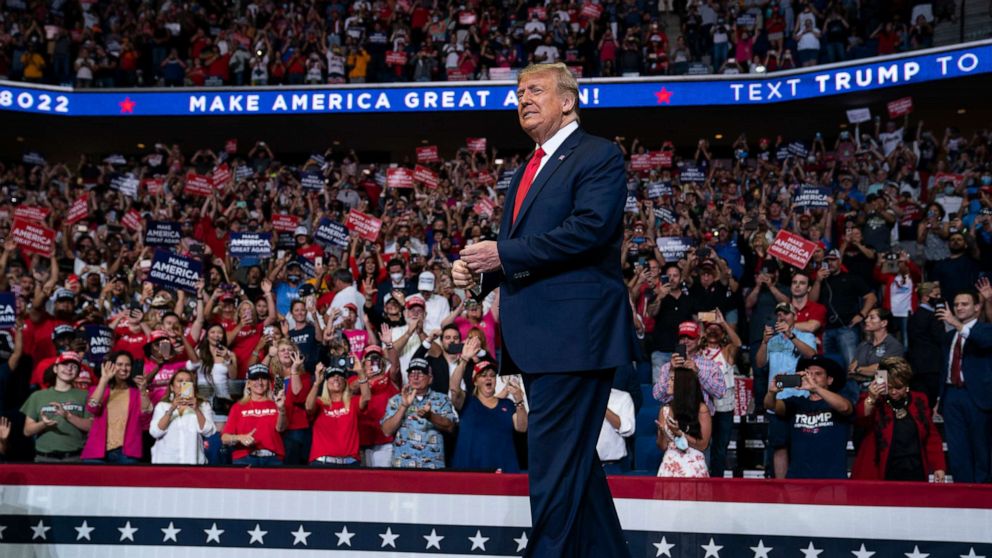 It’s a brand new campaign, with a streamlined plan of attack against former Vice President Joe Biden, advertising in just four states for now and a tight focus on leadership that brings the nation past its COVID-19 crisis.

There is no new candidate. President Donald Trump is offering bundles of conflicting messaging and misinformation — contradicting medical experts, political professionals and even himself on issues as varied as the importance of testing and the reliability of voting by mail.

The president’s remarkable interview with Axios’ Jonathan Swan offered insights into how he digests and spins information. It also showed him again effectively arguing with himself about how serious the public-health crisis remains — and how desperately he wants to play cheerleader rather than doomsayer.

The campaign, meanwhile, is under new leadership and trying out new message discipline against Biden. They are back on the air only in North Carolina, Georgia, Florida and Arizona — four states he hoped not to worry about in 2020 and where early voting is key.

There’s a potential conflict there, of course, with what the president is saying about supposed dangers posed by mail-in voting. The president is even now asserting that voting by mail is “Safe and Secure” in Florida — where Trump himself happens to vote by mail, and where — as the president said at his Tuesday news conference – there is a “great Republican governor.”

His change in messaging could reflect another reality than the state’s politics. What Trump has been saying about both COVID-19 and voting is having an impact, and not one that would seem to benefit his campaign.

Another day and still no deal from Capitol Hill. As is often the case, it is hard to see how the president is making negotiations any easier, especially for Republicans.

Democrats seem to be aggressively speaking with one voice, repeatedly asking for “bold” and “big” solutions to what they see as a once-in-a-century crisis requiring major, continued federal spending. Late Tuesday, ABC News learned that Democrats had increased their request for funding for schools.

Republicans say they are trying to keep the price tag to about $1 trillion, wary of historically high deficits.

“In my view, the fundamental disagreement is the scope and depth of the problem and its solution,” Senate Democratic Leader Chuck Schumer said Tuesday evening.

Still, while Schumer and House Speaker Nancy Pelosi said talks between the parties had been a slog, they claimed progress was being made and White House leaders seemed to agree.

“I would characterize the conversations as productive and a step in the right direction,” said White House Chief of Staff Mark Meadows Tuesday, who has joined Treasury Secretary Steven Mnuchin for many of the week’s bipartisan talks.

In a pretty rare move, Senate Majority Leader Mitch McConnell has given up on the possibility of his caucus coming together on this one. He said openly that his goal is to help cobble together enough votes to back a deal between Democrats and the Trump administration.

Negotiators have set a tentative deadline to try to have a deal by week’s end. Nothing moves Washington like a deadline — that plus a looming recess.

But with the president tweeting threats to take action into his own hands with executive orders, Washington is bracing for another long day of talks Wednesday too as families and businesses wait.

After the polls closed, the majority of votes counted and a winner was declared, Trump finally made his voice heard in the Kansas Republican Senate Primary on Tuesday night, endorsing Rep. Roger Marshall after he had been called as the winner.

“I want to congratulate everybody and Roger on an incredible race,” Trump said Tuesday night. “You have my full support, you know it.”

The Republican primary, which was an endless recipient of outside spending, ended with Marshall in a mostly two-way standoff with former Kansas Secretary of State and failed gubernatorial candidate Kris Kobach. Trump endorsed Kobach in his governor’s race, but made no endorsement between the two.

Kobach was seen as a lightning rod for the GOP in its path to keep hold of the Senate. The Senate Leadership Fund, the campaign arm of McConnell, spent over $1 million attacking Kobach in the final weeks of the primary.