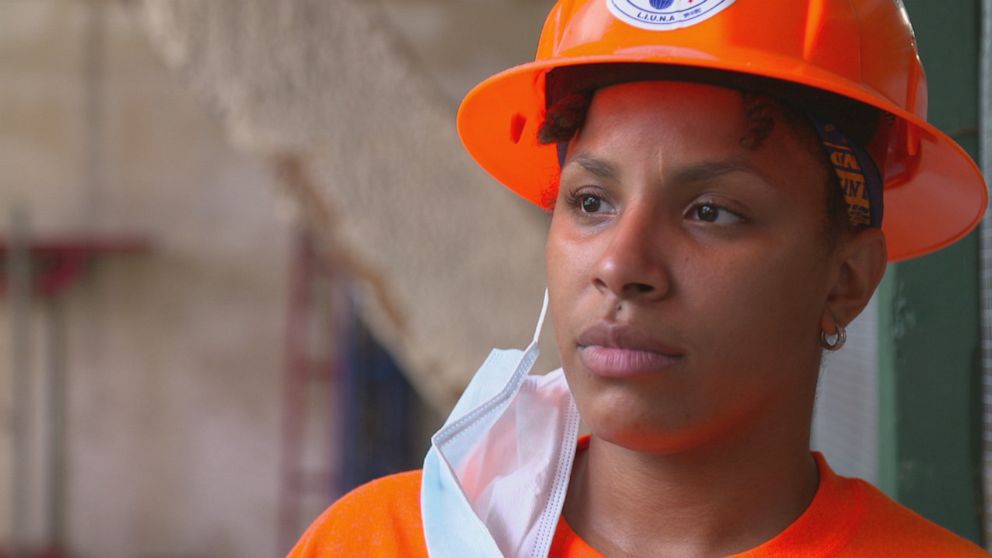 Tierra Williams used to dread going to work at her construction job.

“I had to endure sexual harassment every day,” she told “Nightline.” “[I remember] how my privacy was violated every day, and how every day I woke up sad and depressed that I even had to come here every day and pass by these men that completely violated everything that was my right as a human being. Even fully clothed in front of them, I felt naked.”

Williams and the few of the women she worked with held the lowest ranking and lowest paying jobs on the predominantly male construction site, working as flaggers and hoist elevator operators. She says she was harassed not only by her colleagues, but also her supervisors.

“It was horrible, really, not just for me but for all the women. We always felt like someone was staring at our female body parts,” she said. “We are driving the hoist with our backs to the wall so they can’t really see anything.”

Williams says she endured all kinds of lewd comments and gestures.

“When you didn’t respond to them properly, you were always called a bitch, whore, slut,” she said. “I’m not understanding how [I was being treated this way] if I’m paying you no mind and I don’t want the attention that you’re trying to give me.”

Some of Williams’ male coworkers would ask for her number or tell her that women didn’t belong on construction sites, she said.

The single parent was making $15 an hour at the site, over a dollar more than she had earned when she worked in the fast food industry.

After nearly two years of what Williams claims was daily sexual harassment, she says she reported it for a second time to her supervisors. Two days later, she lost her job.

“I got a call saying that I was being fired for insubordination and time stealing,” she said. “I’ve never been written up on the job. I’ve never had any verbal warnings or anything before then… I knew it was retaliation.”

From the first time she experienced misconduct, she says she knew it was wrong.

“I didn’t know what I could do to correct the issue because no one else was trying to correct it,” she said.

Williams was one of the first women to come forward with sexual harassment allegations against the company. Attorney Jason Solotaroff represents Williams and five other women who sued Trade Off, a subcontractor that provides nonunion laborers to construction sites, for sexual harassment.

“It was the Wild West. There were things that were going on that probably haven’t happened in American offices in the last 50 years,” he said of the culture at the company.

The full scope of the behavior, he says, “goes well beyond what is tolerated in any workforce or workplace in the country.”

He said the alleged misconduct ranged from requests for sexual acts in exchange for benefits like overtime to physical groping, unwelcome contact, being shown sexually explicit photos to physical violence and retaliation against the workers who complained.

“There’s no training, there’s no complaint procedure. There’s no supervision,” he said. “That was just the way it was. And there was no one for my clients to complain to. And when they did complain, they would generally get terminated.”

Solotaroff said that without attention trained on the industry, misconduct was allowed to flourish. According to the U.S. Bureau of Labor Statistics, the construction industry has the second highest rate of sexual harassment in the workforce.

“There’s no #MeToo movement for us. I don’t think that I was famous enough or I didn’t have a complaint against someone that was famous enough,” Williams said. “We’re just women in construction. We just do labor work. We get dirty like everyone else. I just think they think we’re low budget so we don’t matter.”

The women, with the help of the union Laborers’ Local 79, found someone to whom the misconduct mattered: New York Attorney General Letitia James, the state’s first elected woman to hold the position.

“All throughout my career, I’ve been focused on representing the interests of marginalized and vulnerable populations,” James told “Nightline.” “Elections have consequences. One of my priorities is taking sexual harassment very serious[ly] and to investigate complaints and to ensure that all job sites are not hostile and that individuals, particularly women, are respected.”

In this case, James notes, the vast majority of the women affected are low-income women of color.

“We investigated and we confirm[ed] these pattern and practices of discrimination,” she said. “The management of Trade Off, unfortunately, ignored the complaints and in some cases against top men management. They protected those individuals.”

The attorney general’s office’s 17-month-long investigation into the company found a pattern of severe sexual harassment against female employees over the course of the last four years. They found the company allowed behavior including “solicitation of sexual favors by supervisors” and the firing of “at least 12 women after they complained about sexual harassment.”

On July 13, James’ office won a landmark sexual harassment settlement for women in construction. Trade Off settled with 18 former employees for $1.5 million.

Trade Off has denied the findings of the Attorney General’s investigation, stating in part, “Trade Off considers any level of harassment to be unacceptable, and deeply regrets that our process for training and oversight failed some of the women who worked for us. We have acknowledged those deficiencies and pledge to greatly improve them.”

“Normally in settlements, individuals do not engage in certain admissions. I understand that,” James said. “The bottom line is, we stood with women. Right now, Trade Off has to pay $1.5 million to 18 individuals.”

James said her office will monitor Trade Off and that the company will also have to hire an independent monitor to oversee all of its construction sites in New York State for the next three years.

“They have to put in place procedures — a due process — and they have to take sexual harassment complaints serious,” she said. “I don’t trust them. And it’s important that we verify. And our office will verify. Our attorneys, our investigators will be there to verify, to ensure that it’s not a hostile work environment for women or for any individual who might be subject to these types of complaints.”

Since starting the lawsuit, Tierra Williams has joined Laborers’ Local 79 as an organizer, and is advocating on behalf of others. She’s on a crusade to educate construction workers on their rights, which she says too few of them know about.

She believes the union is a game changer, especially for women, and organized her first rally last week.

“I never want to feel what I felt before – from low wages to no benefits to sexual harassment,” she told a crowd of nearly 60 people.

Trade Off told “Nightline,” “We believe many of the complaints were driven by a long-lasting dispute with a union that had trouble competing with Trade Off for services. Ms. Williams is a union organizer for that union, Laborers’ Local 79, and some of the things she is asserting regarding the unfair treatment of workers are just plain wrong.”

James said that pointing to Williams’ affiliation with the union is a distraction.

“The fact is, is that if there were any activity by the union organization, it really has nothing to do with the fact that these women were sexual harassment survivors,” she said. “Those are the facts on the ground. They cannot deny this.”

Solotaroff says he believes the settlement validates and empowers the women.

“That’s very important because as African American women in our society, these are not people who are used to being listened to and who are used to having their problems fixed,” he said.

Recently, Williams has been getting used to getting stopped in the street by strangers asking about the union, whose logo is emblazoned on the back of the shirt she proudly wears.

“I’ve worked in a lot of different fields and sexual harassment is real,” Whitney Johnson told Williams on the street. “It’s like, I shouldn’t have to flirt with you to get the same pay that you know everybody else [is getting]… It’s definitely difficult being a female in construction … and not just construction … most male-dominated jobs.”

‘We will secure justice.’ Colorado reels from mass shooting.