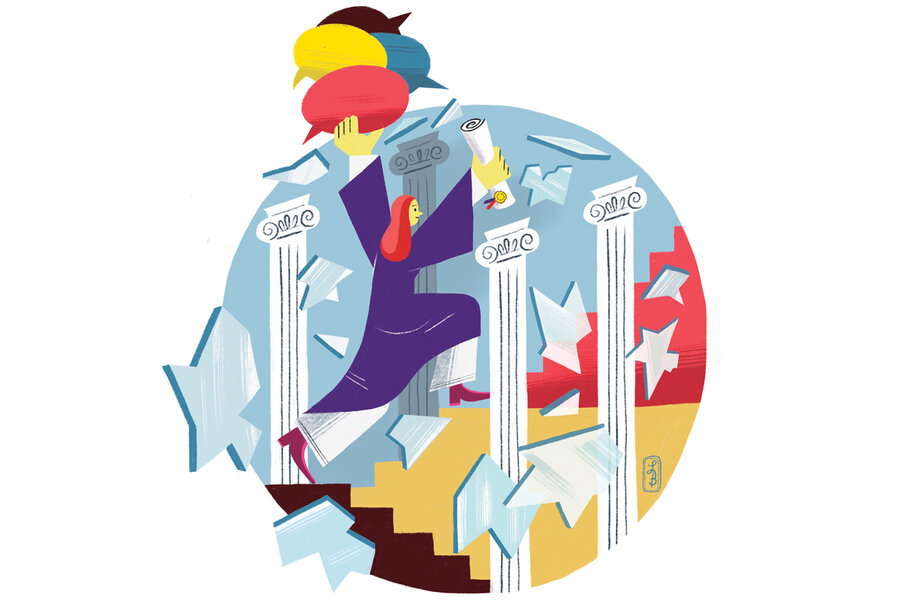 We never knew why my father took over storytelling for his three little girls, but we always suspected it was to save us from “Sleeping Beauty.” Walt Disney’s masterwork hit the big suburban screens in 1959 with a message for girls as vivid as its widescreen Technirama: If you’re pretty enough, a prince will rescue you.

In a masterstroke of counterprogramming, my father invented a series of bedtime stories featuring three princesses who happened to be just our ages and even looked like us.

For some reason, the grownups were never around when peril struck. So, night after night, it was up to the three sisters to save the village, which they always managed to do just about the time that one of us fell asleep.

It did occur to us that this village was either highly unfortunate or its adults incredibly inept that so much fell to these little girls. We also saw that our parents wanted us to be strong. These girls didn’t need to be rescued. They were alert, wise, and bold. That was enough.

But how to carry this storyline into life was not obvious. The fifth-grade teacher might like you if you raised your hand in class, but what about the boy you hoped would ask you to dance? Experience showed that boldness could have a downside.

By the 1970s, there was a cottage industry explaining to women what was holding them back. We needed mentors, networks, and constant vigilance to manage our careers and break through the invisible “glass ceiling” limiting our progress. But in my early experience, glass ceilings were not often invisible. Women were just beginning to be admitted to what had been men-only colleges, and teaching jobs followed. Some who were not pleased showed it.

I loved to tell my network about the welcome dinner for new graduate students in a vast, candlelit Gothic hall. I sat next to the dean of the graduate school, whose first words to me were: “I don’t know why the graduate school is now admitting women. You’ll all just get married, have babies, and your education will be wasted.”

After a few days to recover, I began telling friends this story and found their laughter and support encouraging. Soon, I had accumulated many such stories, all hilarious when told from my point of view. There was the department chair who told me at our first meeting that he used math requirements “to keep little girls out of the program.” Or the job interview that opened with the question: “Isn’t it amazing how so many unqualified women are now getting job interviews?” All good for laughs.

Then, one of them hit hard. A colleague I trusted urged me, soberly, to quit teaching, because “If you don’t leave political science, you will lose everything feminine about you.” In today’s culture, that remark goes straight to laugh line. But on that day, in that place, something went crash. I walked back to my rented apartment over a garage convinced that my career was over. That’s usually a time to call a mentor, but he was the mentor. Nor was it a moment to enlist the network. Pity or encouragement both seemed intolerable.

In the quiet that followed, I opened a Bible, looking for any thought more inspiring than my own. Here’s the first thing I read: “How long will thou go about, O thou backsliding daughter? for the Lord hath created a new thing in the earth, A woman shall compass a man.” (Jeremiah 31:22)

I had no idea what that meant, but there were other Bibles around, so I looked up that verse in another translation: “How long will you hesitate, O erring daughter? Why, the Eternal makes a new thing upon earth; frail woman becomes manly!” (The Bible, James Moffatt Translation)

Then, I laughed. While losing someone else’s idea of femininity might have seemed a great loss, losing frailty surely was not!

The power of that promise sustained me. I taught political science for seven more years with a great sense of appreciation for the opportunity, until taking up journalism, which I loved more.

I also learned to stop telling war stories for entertainment, until now, when they may help someone. What I found was that the weight of these “funny” stories accumulates, like the chains dragged around the afterlife by Marley’s Ghost. Over time, it’s hard not to come to see yourself as a victim, permanently limited by the thoughts of others. In effect, I was building my own glass ceiling – out of granite.

When my telling of the stories eased off, so did my scars and bruises. Resentment over these past incidents mercifully subsided. Did the barbs stop? No, but they did not linger on in my thought.

Still waiting for a prince? Be one.