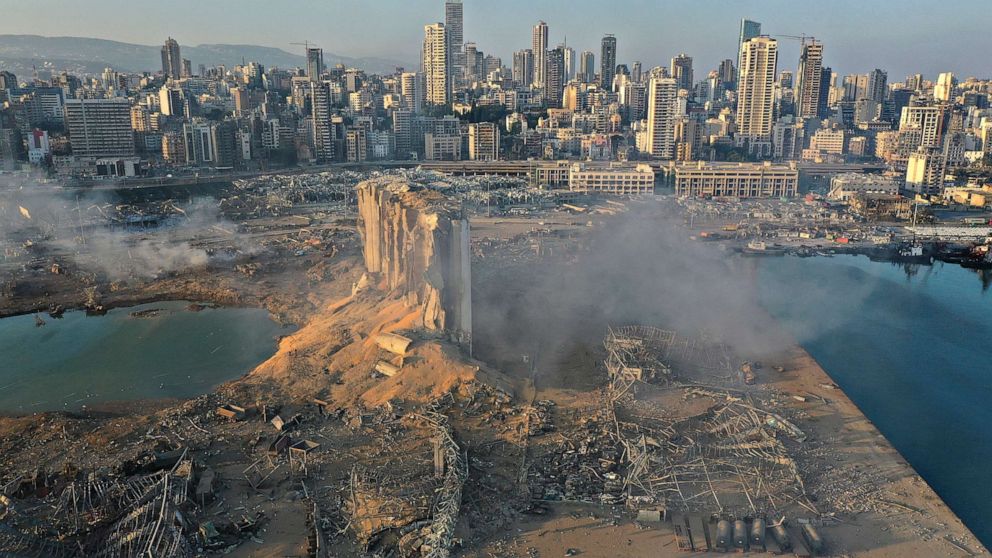 LONDON and PARIS — The death toll in Tuesday’s massive explosion in a Beirut warehouse has climbed past 100 as search and rescue efforts continue in the Lebanese capital.

At least 135 people are dead and more than 5,000 were injured in the blast, according to the latest figures released by Lebanon Health Minister Hamad Hassan.

According to a UNICEF Situation Report released late Wednesday, another 100 are reportedly still missing.

At least one U.S. citizen was killed in the explosion, and several others have been injured, a U.S. State Department spokesperson told ABC News.

The enormous explosion, which flattened a portion of the city, has left up to 300,000 people homeless, Beirut’s governor said.

The city’s hospitals reached capacity soon after the explosion, forcing many of the wounded to travel as far as Tripoli, 50 miles north, to receive treatment. At least three hospitals were damaged by the blast.

Three days of mourning have been declared.

The exact cause of the blast remains unknown, although authorities said that more than 2,700 tons of ammonium nitrate, an industrial compound, was being stored in the warehouse that was the scene of the blast. During a virtual appearance at the Aspen Security Forum on Wednesday, U.S. Defense Secretary Mark Esper said that there is still information coming in about the explosion, but that “most believe it was an accident, as reported.”

After an emergency cabinet meeting, Lebanon’s President Michel Aoun announced that an unspecified number of people who managed the ammonium nitrate storage at the warehouse linked to the explosion are to be put under house arrest. He also announced that four government field hospitals will be set up, and an official report into the explosion will be delivered to the cabinet within the next five days.

Ammonium nitrate is the same fertilizer that was used to make explosives for the Oklahoma City bombing that killed 168 people 25 years ago.

The ammonium nitrate appears to have been confiscated from a commercial cargo ship abandoned in Beirut in 2013 and then confiscated by the Lebanese authorities a year later.

According to lawyers who said they represented its crew, the ship, the Rhosus, was forced to dock due to technical issues in autumn 2013 and then forbidden to sail by the Lebanese authorities after they found violations during an inspection.

In a notice describing the legal dispute published on Ship Arrested, the lawyers wrote the ammonium was offloaded by Beirut’s port authorities and placed in warehouses to await auctioning or proper disposal.

Six years later, the confiscated ammonium nitrate had not been moved from the port’s warehouses.

The Lebanese Red Cross has made a series of urgent appeals for blood donations after they sent 75 ambulances and 375 paramedics to the scene. Search and rescue teams continued to look for missing people around the site on Wednesday.

A firefighter at the port told ABC News that a team of 10 emergency responders who first responded to a fire at the scene are missing after potentially being caught in the explosion.

Yukie Mokuo, UNICEF’s representative in Lebanon, said she was “concerned that children are among the casualties and we are aware that those who survived are traumatized and under shock.”

Drone footage from the port shows much of the area flattened by the blast, the effects of which were felt across the entire city. The United States Geological Survey reported that the explosion registered a 3.3 magnitude, with reports suggesting it was heard as far away as Cyprus, 150 miles away into the Mediterranean.

Journalists at the Lebanese newspaper the Daily Star and the BBC offices in Beirut documented the moments after the explosion hit, showing significant damage to their offices.

Roy Badaro, a Lebanese economist, told ABC News he expected an exodus of up to 1 million people in the aftermath of the explosion.

“It’s beyond imagination, the repair of the country is beyond the means of Lebanese people,” he said. “All the people that contribute to the economy will leave … People nowadays they don’t have the money to repair, they don’t have the hope, they lost hope in their country. It’s a collective failure. It’s the failure of the whole country, not only in economic terms.”

Estimating the direct damage to “one of the biggest ports in the eastern Mediterranean to be around $3 billion, he said the consequences will play out on the poorest in Lebanon.

“We’ll be using small ports, it will increase the prices, it will hurt the poor,” he said.

The president of France, Emmanuel Macron, announced he would be visiting the stricken country on Thursday.

“I will go to Beirut tomorrow to meet the Lebanese people to bring them the message of fraternity and solidarity from the French,” he posted on Twitter. “We will take stock of the situation with the political authorities.”

The U.K. announced on Wednesday a package of emergency aid for Lebanon, which includes immediately deploying search and rescue support and offering up to 5 million pounds to assist people made homeless by the disaster.

President Donald Trump said, “Our prayers go out to all the victims and their families. The United States stands ready to assist Lebanon.”

Esper said Wednesday that the U.S. is “positioning ourselves to provide them whatever assistance we can: humanitarian aid, medical supplies, you name it, to assist the people of Lebanon.”

The U.S. is providing “immediate humanitarian assistance” to the Lebanese government, including “long-standing support” to hospitals, according to a spokesperson for the U.S. Agency for International Development. The U.S. is not sending a Disaster Assistance Response Team to the country, but the agency’s disaster experts in the region are monitoring the situation, the spokesperson added.

Lebanon is currently in a position of severe financial difficulty, with the strain on the country’s health care system already exacerbated by the coronavirus pandemic.