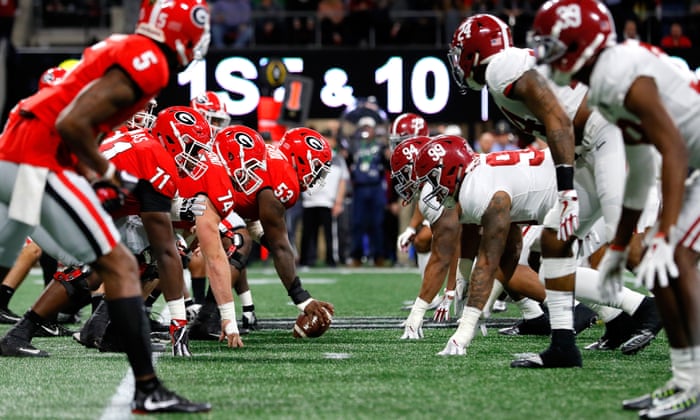 The college football season is less than a month from kicking off on campuses across the US, but there are still more questions than answers surrounding player health and safety amid a coronavirus pandemic that on Sunday surpassed 5m confirmed cases nationwide, equal to one in 66 Americans.

The University of Connecticut, which competes independent of any league affiliation in the NCAA’s top-flight Football Bowl Subdivision (FBS), became the first major program to cancel its 2020 season on Wednesday. Then came the entire Mid-American Conference, which on Saturday became the first FBS league to pull the plug on all fall sports, including football.

And now ESPN reports that the sport’s five wealthiest conferences – the Pac-12, Southeastern, Big Ten, Big 12 and Atlantic Coast – held an emergency meeting on Sunday to discuss the possibility of there being no football at all this fall.

University presidents, athletics directors and conference commissioners have relied on statistics that suggest the odds of a college-aged athlete dying from Covid-19 are extremely low, but safety is not that straightforward when the long-term effects of the virus remain unknown.

Many football players, particularly those who play on the offensive and defensive lines, are in a higher risk category due to their body mass index, which may explain why linemen accounted for nearly half of the 66 NFL players who opted out of the forthcoming season before last week’s deadline. Additionally, nearly two-thirds of the player pool at the collegiate level are drawn from minority communities that have been disproportionately affected by Covid-19.

And a mounting number of cases involving athletes are driving home the reality that even young and fit are at risk. Sports Illustrated quoted a team doctor who was aware of 10 Covid-related heart issues on college football teams. Same for 27-year-old Boston Red Sox ace Eduardo Rodríguez, who thought he had recovered after testing positive in early July, only to be shut down for the season after he was diagnosed with myocarditis, an inflammation of the heart that has been found at a high rate in recovered coronavirus patients.

What preventative measures can be taken?

Not a whole lot, aside from the rewriting the rule book to a point where the game would be fundamentally unrecognizable. Dr Anthony Fauci, the US’s top infectious disease expert, has described football as a “perfect setup” for spreading Covid-19 due to the full-contact nature of the sport on every play.

“This is a respiratory virus, so it’s going to be spread by shedding [the] virus,” Fauci told NBC in May. “… I would think that if there is an infected football player on the field – a middle linebacker, a tackle, whoever it is it – as soon as they hit the next guy, the chances are that they will be shedding virus all over that person.”

And the sheer size of football rosters and facility requirements make the isolated “bubble” setups that have so far worked for the NBA, WNBA, Major League Soccer and National Women’s Soccer League impractical.

If outbreaks are inevitable, why play at all?

You guessed it: money.

The more than 50 public universities in the Power Five conferences generated $4.1bn in revenue in the 2019 fiscal year – an average of more than $78m per program. That’s more than 60% of those schools’ combined total operating revenues, according to USA Today.

While large chunks of that revenue are derived from lucrative broadcasting deals and apparel contracts that enrich schools and coaches directly, it has a trickle-down effect on smaller programs, many of which depend on road games against giants like Alabama to fund their entire athletics programs.

The economic impact also extends to the typically smaller college towns and cities that dot the college football landscape and depend on football weekends for their livelihoods, many of which happen to be located in regions of the country where Covid-19 cases have seen a resurgence over the summer, including Texas, California and Florida. Just one University of Alabama home game has a “visitor expenditure impact” of about $19.6m in the Tuscaloosa area, according to a recent study by Alabama’s Culverhouse College of Business.

Won’t the players just be told to play?

Unlike in pro sports, the student-athletes who make these billions of dollars in revenue possible are unpaid amateurs without union protection, meaning they have no say in return-to-play conversations. And while they can walk away at any time and won’t face a loss of income, they will also be missing out on the exposure that for most will be necessary to make it to the pros. So far, more than 30 student-athletes from Power Five schools, including many projected to go in the first round of next year’s NFL draft, have done so.

The NCAA, which acts as the regulatory body for college sports in the US, released a set of guidelines on Wednesday intended to protect collegiate athletes, while expressing “serious concerns about the continuing high levels of Covid-19 infection in many parts of the nation”. But a new governance model approved in 2014 allows the Power Five conferences to set certain rules for themselves independent of the other 280 schools classified as Division I programs. That’s left the biggest programs in the sport mostly to their own devices as they navigate a way forward amid the pandemic.

Aren’t they cowed by their coaches and universities?

Groups of players from at least four major conferences have publicly floated their concerns over coronavirus protocols. They include a collective of Pac-12 players who last week presented a list of demands including player-approved health and safety standards enforced by a third party and a civic-engagement task force to address racial injustice issues.

Additionally, Colorado State has suspended all football activities after an investigative report by the Coloradan newspaper reported that unidentified football players and members of the athletic staff said coaches told them not to report coronavirus symptoms and threatened players with reduced playing time should they quarantine.

Will it affect anyone else?

The NFL, which no doubt has been monitoring developments closely. College football is effectively a shop window for players looking to make it in the pros and a prospect’s status can rise and fall dramatically over the course of a season. It’s unlikely Joe Burrow would have gone first overall in this year’s NFL draft if not for his banner campaign for Louisiana State University last year.

If the Power Five conferences decide to move to a spring schedule, then expect more college players who are projected as high draft picks to opt out rather than risk their long-term health and potential millions.

Where is this all headed?

The emergency meeting reported by ESPN on Sunday night shows the growing concerns among officials that playing the upcoming season will be impossible to pull off safely. The final say on whether a season will happen rests in the hands of the university presidents.

The upshot from the swirling reports is simple: No one wants to be first to pull the plug. But while the short-term impact of no football in the fall will be significant, the idea of millionaire administrators and coaches gambling with the health of unpaid players during a pandemic to entertain viewers and keep the money flowing is far more grotesque.

Women’s hockey team has a lot to gain in one year: Salima Tete

PGA Championship: Ben An makes first hole-in-one of the week at Harding Park