Recently held world day of protection of stray animals, in connection with this event we decided to put together the most interesting stories of dogs rescued from death. In the world there are many shelters and rescue centers for animals, but it’s still small and they are not able to help everyone. Perhaps looking at these instructive pictures, you will understand that you don’t need to be God to save someone’s life. Help animals be happy! 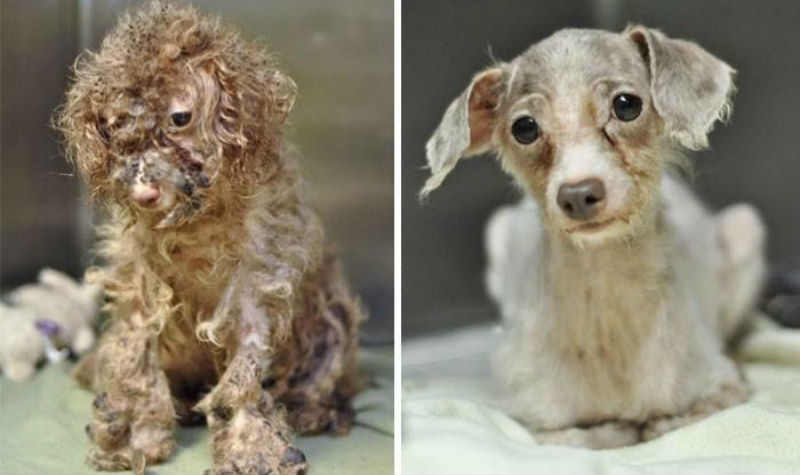 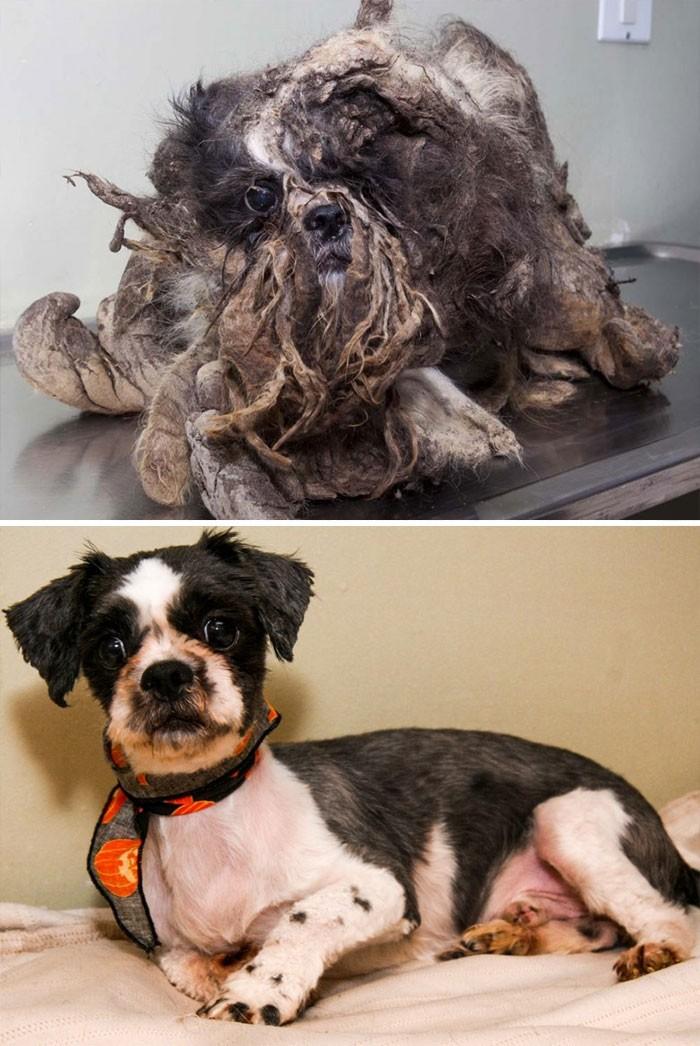 This poor guy was found on the streets of Montreal, he looked so bad that it was hard to tell that it was actually a dog. He could barely move due to a huge matted tangles of hair. But look how charming he was after the haircut! 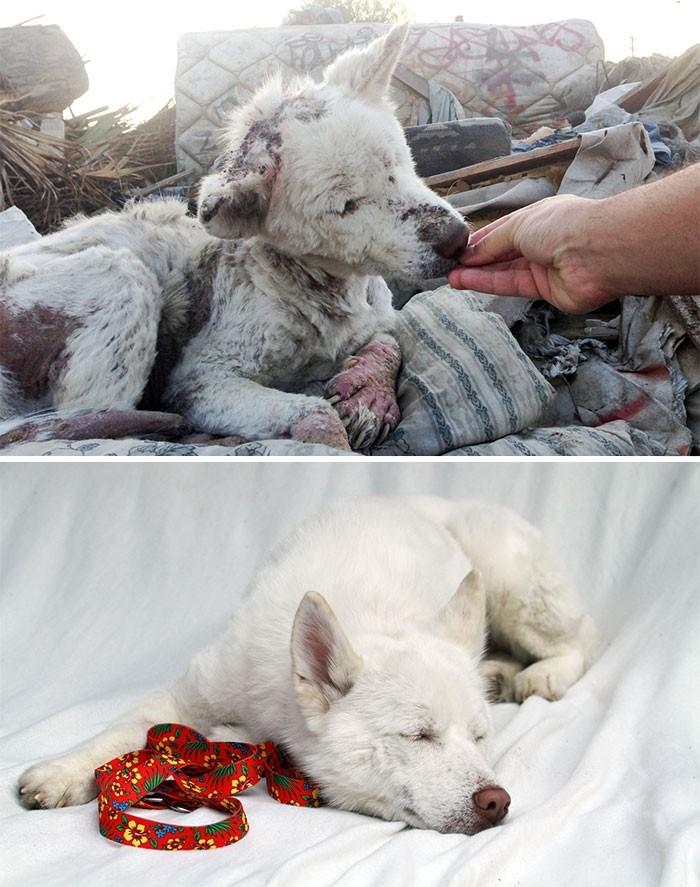 Miley lived in a trash pile, severely injured and barely able to walk. Now Miley is happy and healthy, she lives in a new house with his new family. 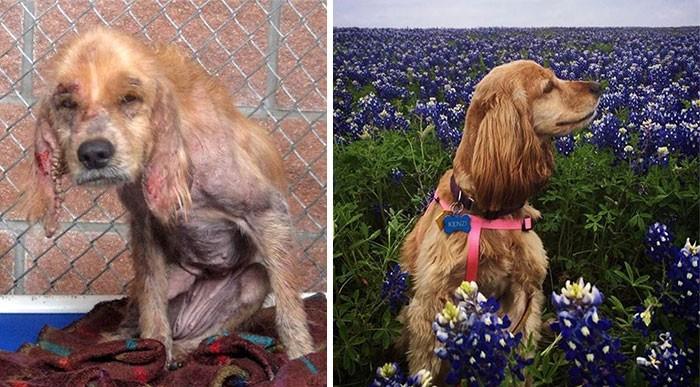 Cocker Spaniel Kenzie was found abandoned by its owner in San Antonio. Her recovery shows that love and care can work miracles. 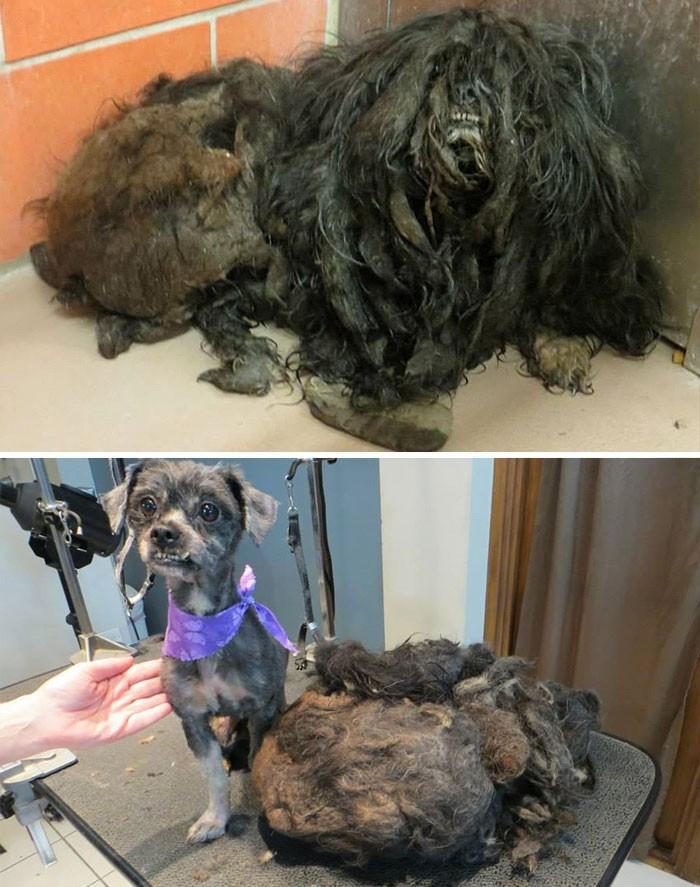 The animal rescue Foundation Trio took the lump of matted fur from an open access shelter. Poor fur on the legs called Ellen, and she was very hard because of the huge amount of dirt on the wool. Shaved her coat weighed almost a kilogram. Now this wonderful dog is ready for a new life.

One woman spotted this little poodle when he was eating out of a garbage can in Los Angeles. She gave Dolly a helping hand, thanks to which the girl was again fluffy and adorable. Was removed 4.5 kg of fur with Dolly, weighing 6.8 kg. 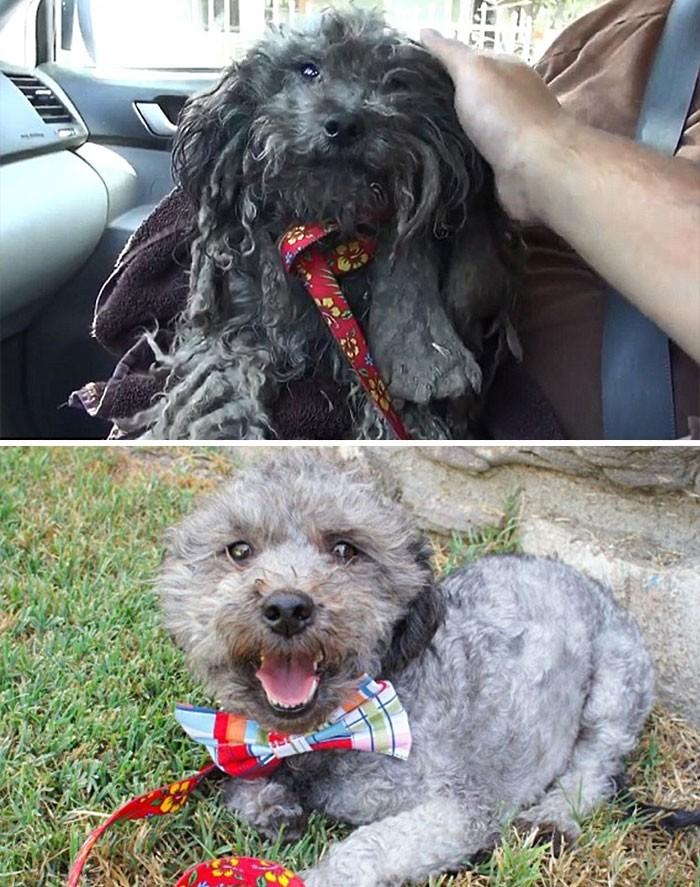 The owners threw Theo into the street, leaving him in the lurch, where he lived for about a year until he was rescued by shelter workers Hope For Paws. 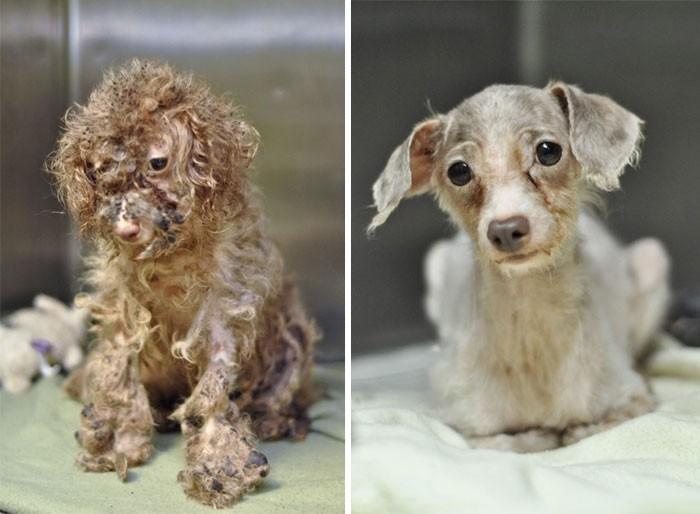 Little Betty was abandoned by the owner. After she fully recovered and turned into a charming miracle, she is ready for life in the new house. 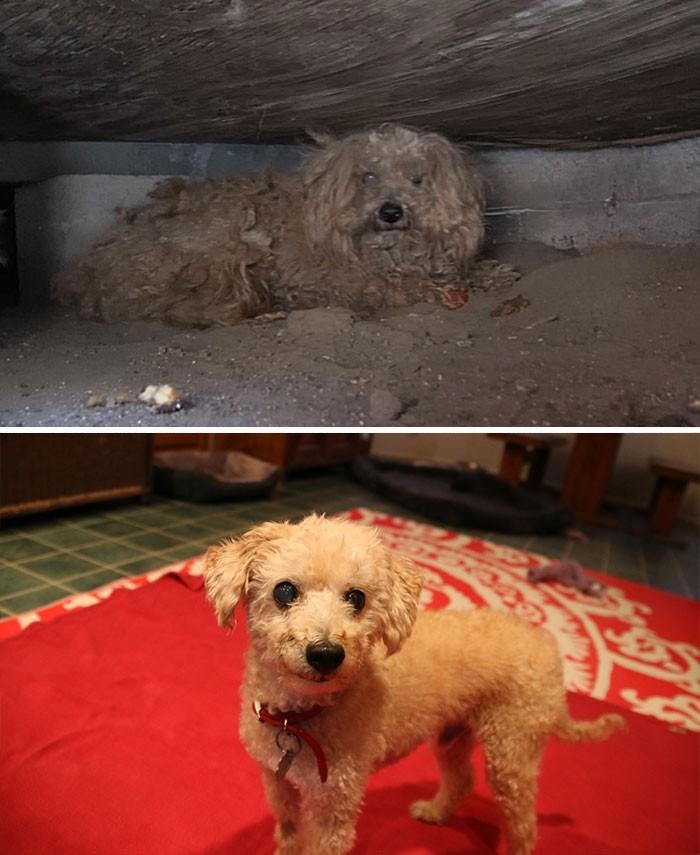 Woody was thrown into the street by relatives of his owner who died. He was hiding under a nearby barn, waiting for the return of his deceased owner for almost a year, not allowing anyone to him. Until he was rescued by Hope For Paws staff. The rescuers soon realized that the dog was blind in one eye, but that did not stop woody to fully recover and be kind and affectionate dog.

2-year-old miniature poodle Treasure was found passing by motorists who drove her to help the Natchez-Adams. Because of the monstrously thick and dirty wool she could not even walk. But after a visit to the vet Treasure was again beautiful.

Alan came to the shelter with matted and dirty hair, because of the abundance of which it was difficult to even understand that before you is a dog. To inoculate, Alan needed to shave completely. After the haircut, it turned out that Alan was much younger than it seemed at first glance. Cute dog found a new home. 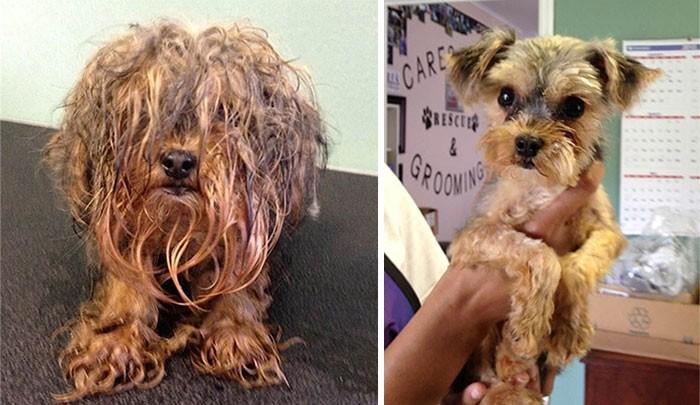 BU was taken to a shelter animal help Animal Rescue & Educational Shelter in Florida after being found on the side of the road all dirty, wet and soaked in urine. After clipping and care, she began to look simply amazing. 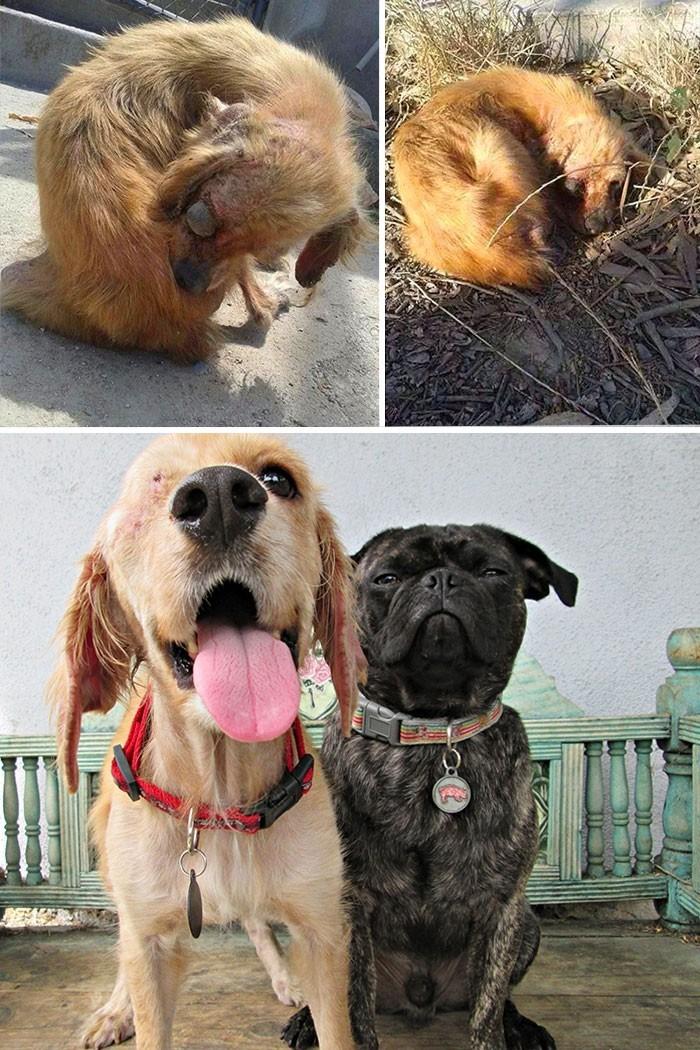 This poor guy was found barely alive in Mexico with a horrible eye infection. Someone uploaded his photo on Facebook and shared his story. People were touched by the story and donated money to transport dogs in the United States for treatment of injuries. Now Iggy is healthy and happy, even with one eye. 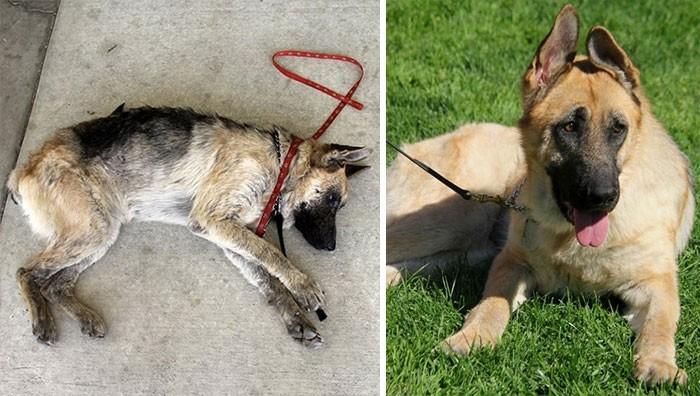 Vita was found emaciated with hunger and close to death at the dump in Los Angeles. She weighed only 32 kg. Thanks to veterinary care for rescue, the proper care and nutrition she was able to fully recover. 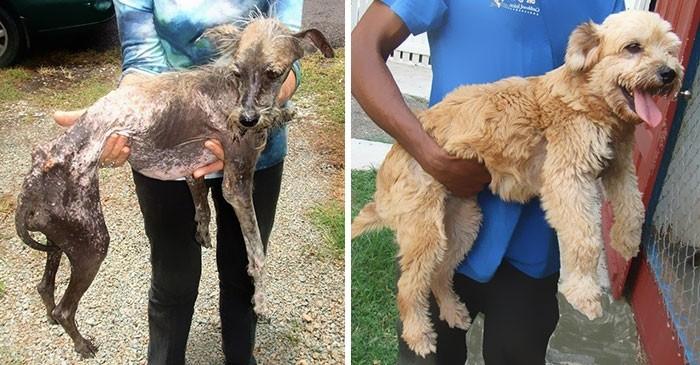 Cedar was named after the Golf course, near which were found. He went bald from stress and was so thin that the skin covered the bones in his body. Since then, cedar has recovered and found a new home. 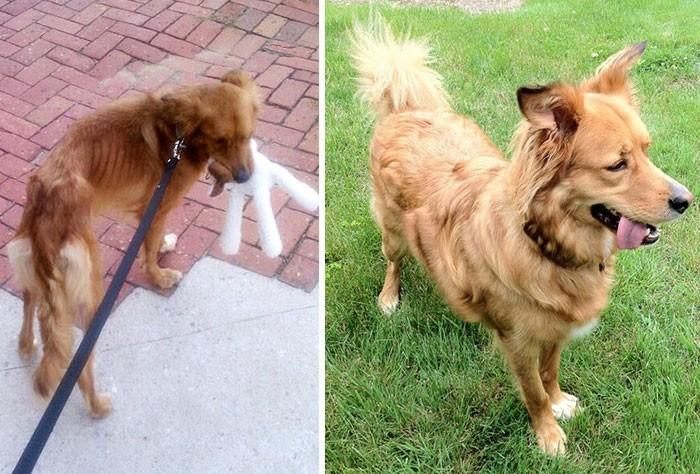 These photos were taken with a time difference of a year — as soon as the owner took Olivia from a shelter and after a year of happy life in the new house. 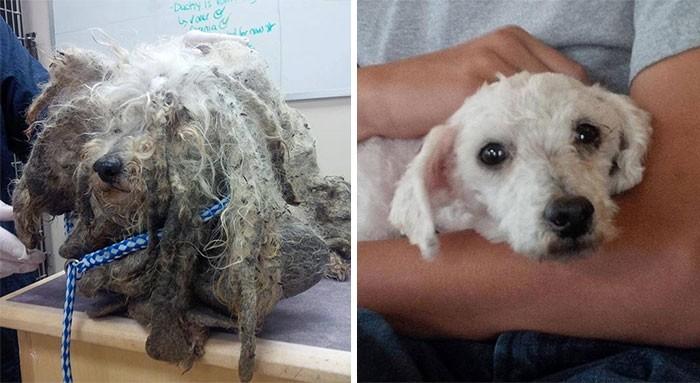 Shrek was found all plastered with mud, and his hair is tangled so much that he could barely move his legs. After removed the excess fur and his wounds were healed, dirty beanbag was a 6-year old dog breed maltipoo. Shrek soon found a new home with a loving owner.