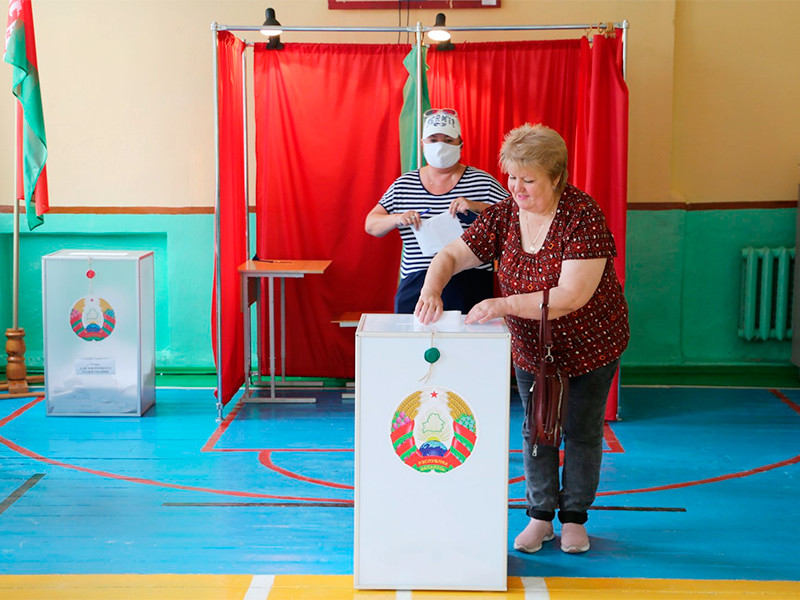 According to the results of an exit poll conducted by Youth laboratory of sociological research of sroo “BCMA” by request of TV channel “the World” victory in the presidential elections in Belarus won by incumbent President Alexander Lukashenko. He scored 79.7% of the votes, reports BelTA.

Second place went to main rival of Lukashenko Svetlana Tikhanovski. She enlisted the support of 6.8% of Belarusians.

The survey was conducted in 320 sites across the country and was anonymous. There were interviewed 12 340 people. Answered questions for 67.6% of them. Sampling – multi-stage, combination.According to the CEC, 41,7% of the electorate voted early, from 4 to 8 August. The highest turnout in early voting was recorded in the Gomel region, there came to areas of 54.44%.

Meanwhile, the head of the Central election Commission of the country (CEC) Lidia Yermoshina said the TV channel “Belarus-1” on elections of the President of Belarus organized a deliberate spoiling of ballots. “This corruption is organized through the fault of those initiators who refer to themselves as “Honest people”, who are preparing observers, voters, who promoted the possibility of spoiling of ballot papers. Immediately I can say that if this will happen, the electoral Commission of more than one ballot instead of the spoiled have no right to give,” she said.

Yarmoshyna warned that later the proportion of voters may decrease as the number of voters in absolute numbers will increase due to the fact that many are now entered in the supplementary lists. This is due to the fact that some voters on the advice of relatives was not brought into the lists, but still came to the polling stations.

Media reported about the deployment of special equipment to Lukashenko’s residence. Security forces blocked the street of Karl Marx, which is the building and shielded the October square, where is located the Palace of the Republic,reports the Telegram-channel NEXTA Live.

NEXTA has published a photograph taken on the street of Engels, where also the building of the presidential administration. The picture shows several units of special equipment. At the entrances to Minsk seen military units, reinforced with armored vehicles.

Eyewitnesses reported the Agency “Interfax-West” that the city is not available the services of taxi services. When trying to book a taxi, the subscriber is faced with the fact that the service number is always busy, at least five companies – service representatives. In addition, taxis are almost not visible on the streets. According to the taxi drivers, around the major parks in Minsk exhibited lorries, tractors, heavy construction equipment, tower cranes.

In addition, in Minsk at present, the majority of customers have no Internet, reported unrelated residents. The Agency “Interfax-the West” are also experiencing serious difficulties at work due to disruptions to the Internet.

In the capital of Belarus, people began to gather at the stele “Minsk – hero city”. The opposition announced a General gathering of citizens near the stele at 22:00. There are first detained. “We show its unity, occupied the center of the city and demand new elections without Lukashenka”, – stated in the message disseminated in social networks.

Stun grenades used on Victory square in Central Minsk, claps coming from the side of Independence Avenue, reports RIA “Novosti”. Victims assist. In Victory square, the opposition lights the fire and throws them in the direction of security forces.

Of detainees reported from Gomel, Mogilyov and Vitebsk. According to eyewitnesses, law enforcement officers take away people from the Central area, but quickly let go.

9 Aug took place in Belarus the main day of voting in the presidential election. Early voting was held from 4 to 8 August.

For the post of President claimed by the acting head of state Alexander Lukashenko, co-chair of the public movement “Tell the truth” Andrey Dmitriev, former Deputy of lower house of Parliament Anna Konopacka, housewife Svetlana Tikhanovski, and the Chairman of the party “Belarusian social-democratic Gramada” Sergey Cerecer.