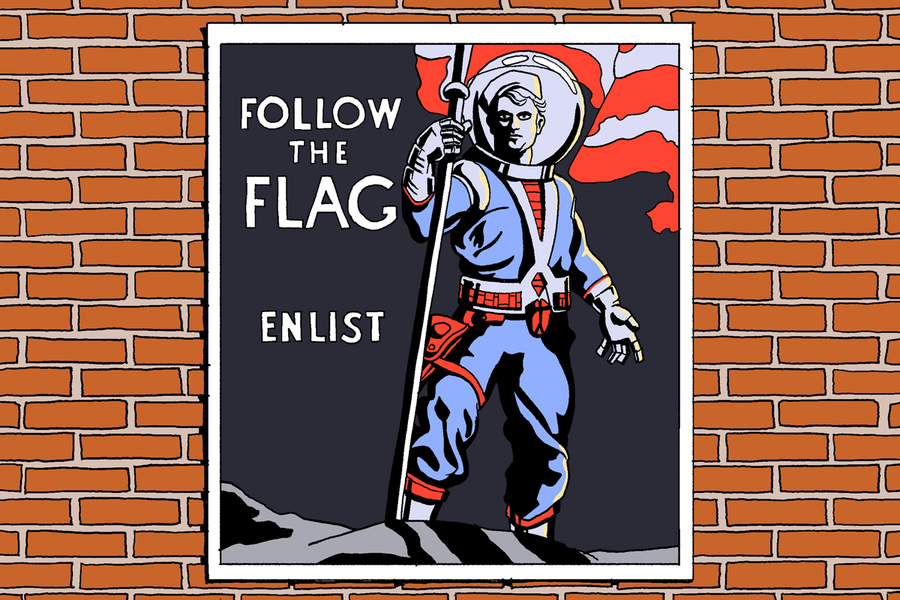 Russian and U.S. negotiators met in Vienna this week to discuss a danger that has become increasingly urgent in recent years: how to curb the militarization of space.

Unless a new treaty, or at least a general understanding, is soon established, experts say, the future of human activity on “the final frontier” is going to look more like Star Wars than Star Trek.

There’s a lot to talk about. Last week the newly-minted U.S. Space Force accused Russia of deploying a “projectile weapon” in near-Earth orbit close to a U.S. spy satellite. Though nothing was destroyed, the United States has been complaining for over a year about Russia’s use of a maneuverable new breed of “inspector” satellites that can spy on U.S. satellites and might be employed as weapons.

The Russians, for their part, argue that the U.S. has developed elaborate Earth-based weaponry capable of attacking an adversary’s satellite network in war. Both sides clearly agree that it’s high time to sit down and at least begin a conversation about it.

“If this process of weaponizing space gets going, it can lead to a hugely expensive and destabilizing arms race,” says Vladimir Dvorkin, an expert with the Center for International Security at IMEMO, a major Russian research institution under the Russian Academy of Sciences. “Right now there are no laws against the deployment of conventional weapons in Earth orbit, either the kind that can hit other objects in space or the kind that can hit the Earth. We really need to sit down and come to an agreement.”

The only major international treaty that regulates the militarization of space, the Outer Space Treaty, was signed at the dawn of the space age in 1967. It bans the stationing of weapons of mass destruction in Earth orbit, but does nothing to limit the multitude of military and dual-purpose technologies that have since proliferated or are under active development. They include spy satellites, electronic warfare platforms, global positioning and targeting systems, missile interceptors, and laser weapons.

The U.S. accuses Russia of fielding a new type of vehicle, which is able to scoot around under its own power, spying on other satellites and potentially destroying them. Specifically, the discussion is about Kosmos 2543, which was launched from a larger Russian satellite, Kosmos 2542, in December 2019. The Russians insist that the new vehicle, which has snuggled up to both Russian and U.S. satellites since appearing, is just an “inspector” satellite whose job is basic reconnaissance. But earlier this month Kosmos 2543 itself disgorged a new object from its body that the U.S. Space Force judged to be some sort of projectile weapon which, firing under its own tiny engine power, could easily be used to destroy another satellite.

“This is further evidence of Russia’s continuing efforts to develop and test space-based systems,” said Gen. John Raymond, U.S. Space Force chief of space operations, in an official statement, “and consistent with the Kremlin’s published military doctrine to employ weapons that hold U.S. and allied space assets at risk.”

The Russians say it’s just a probe, intended to help the inspection work of the larger vehicle. But it’s a whole new situation, and it raises a host of questions, says Andrei Baklitsky, a security expert with MGIMO, the Moscow State Institute of International Relations.

“This issue is pretty fuzzy,” he says. “Once you have something in space that can maneuver with its own engine power, you effectively have a weapon. It doesn’t take much to knock out a satellite. But, of course, for it to be an actual war-fighting threat you would need to have an awful lot of them already positioned in Earth orbit, not just one.”

The Russian satellite-killer test – if it was that – was far from unprecedented. During the Cold War both the U.S. and the Soviet Union experimented with ways to destroy enemy space infrastructure, sometimes involving nuclear weapons. After signing the Outer Space Treaty, efforts switched to more targeted methods. In 1985, the U.S. successfully destroyed an American target satellite using an anti-satellite (ASAT) missile fired from a high-flying F-15 fighter. In 2008, the U.S. employed a sea-based Aegis missile defense weapon to shoot down a huge U.S. reconnaissance satellite with hazardous fuel compounds on board, in an operation billed as intended to ensure public safety but criticized for its military implications.

A year earlier China destroyed one of its own satellites using an ASAT missile, an operation that left large amounts of hazardous debris floating in orbit. India conducted a similar test last year.

The rise of Space Force

Russian analysts say that Moscow is deeply worried about the secretive U.S. military program in space, which now has an official face in the form of the U.S. Space Force, a new branch of the U.S. military. Among its missions is the operation of the mysterious X-37B, an unmanned version of the old Space Shuttle. The two ships in the U.S. squadron have already had five secret space flights, logging a total of nearly eight years in orbit. The Russians claim that the X-37B does much the same tasks that their Kosmos satellites do, including positioning maneuverable “inspector” satellites in Earth orbit.

The Space Force is reportedly due to reveal an official doctrine for fighting war in space in the next month, something that Russian analysts warn might lead inexorably into a new space arms race.

“Russia’s concern isn’t so much about any particular U.S. weapons or activity in space at present,” says Mr. Baklitsky. “But we do worry that now there is a permanent U.S. Space Force, and it is producing its own war-fighting doctrine, that we could have an unstoppable process. This renders any effort to find strategic stability on Earth much more complicated.”

At the same time, some Russian analysts fret about the collapse of U.S.-Russian space cooperation, whose heyday was in Cold War times, but which continued until recently in connection with the International Space Station. But Russia has declined to join NASA’s Artemis program, which plans to put people back on the moon by 2024. Recently the Russian space agency Roscosmos reacted angrily to President Donald Trump’s April order to allow mining on the moon, even in the absence of any international treaties to regulate it.

Russia has since announced that it will partner with China to build a research station on the moon, a move that will do little to resolve Earthly tensions.

“Whatever else happened, space cooperation was always a shining light, evidence that countries could cooperate for the common good,” says Andrei Ionin, an independent Russian expert. “Such projects always played a stabilizing role. But now it seems everyone will go their separate ways when it comes to exploring the moon. Every man for himself is hardly the way to improve international cooperation.”

Editor’s note: The original version misidentified the institution at which Andrei Baklitsky works.