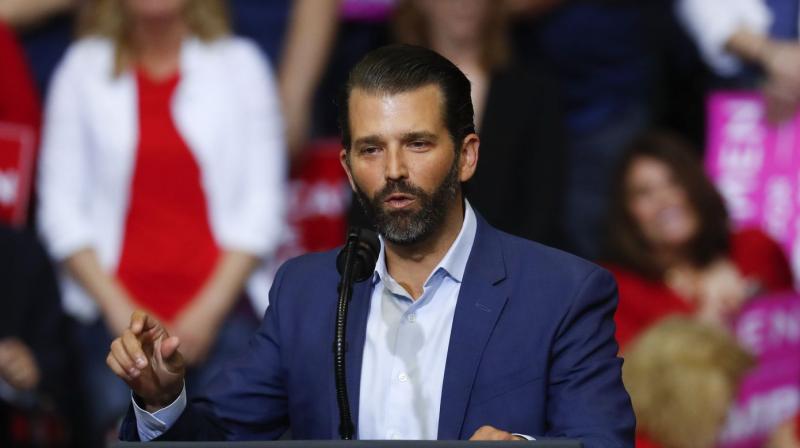 Washington: US President Donald Trump has a key advantage in the battleground states that could re-elect him in November, his eldest son Donald Trump Jr has said, citing an op-ed which claims that 50 per cent of Indian-American voters in these states are moving away from the opposition Democratic Party towards his father.

Seeking re-election for his second consecutive term, Trump, 74, is pitted against Democratic presidential nominee Joe Biden, 77, in the November 3 presidential elections. Most of the opinion polls show that Biden is several points ahead of Trump.

Trump Jr, who is leading his father's 2020 re-election campaign, played a key role in the outreach to the Indian-American community in 2016, which he has continued during the last three-and-a-half years.

“A Key Advantage in Battleground States Could Secure 2020 for Trump,” he tweeted on Sunday, along with an op-ed written by an ardent Trump supporter Al Mason in the latest issue of American Greatness news website.

According to the article, Trump, a Republican, could find himself the recipient of tens of thousands of Indian-American votes across the United States.

“I have stirred the pot with my findings – and the air bubbles of appreciation by the Trump supporters and fear of the Democrats are floating around,” Mason, one of the honorary co-chairs of the Trump Victory Finance Committee, told PTI after the tweet by Trump Jr.

“As the co-chairman of the Trump Victory Indian American Finance Committee, I have seen firsthand the results of grassroots polling efforts of Indian-American communities in each of these states,” Mason wrote in his op-ed.

“Come November 3, 2020, Trump could find himself the recipient of tens of thousands of votes from Indian-American communities across the US, and in particular, in the battleground states, including Florida, Virginia, Michigan, and Pennsylvania, that Trump needs most to secure his reelection,” Mason said.

“Quite simply, the results show that as many as 50 per cent of potential Indian-American voters, the vast majority of whom traditionally have voted Democrats in presidential elections, will defect from the Democratic Party and vote for President Trump,” he said.

“This mass defection could add tens of thousands of new Trump voters in key battleground states and could very well end up helping to secure the president's reelection,” Mason said.

“Some Indian-American leaders who were part of the Trump campaign in 2016, are threatened by the attention the community is giving to my findings. They fear their importance seems to have been lost. But they have nothing to fear – as I am not the leader of the Indian-American community, nor am I representing the community in any manner, form or shape,” Mason said.

Mason said he is helping to bring all the Indian-American leaders and groups of Trump supporters under one umbrella in support of Trump's re-election.

“My opinions are not the Trump campaign's talking points – but purely my findings and views, which I truly believe will be the outcome of the presidency on November 3rd, 2020-Trump Victory,” he asserted.

Referring to his survey, Mason wrote in the op-ed that Trump's support among Indian-Americans is the result of at least a year of aggressive outreach on the part of the president and his campaign to bolster the historic relationship between the United States and India, and to reach out to the Indian-American communities within the US on a more personal level.

Dubbed 'Howdy Modi!', the event represented the largest rally ever held with a foreign leader in the US, he wrote.

“In my own conversations with colleagues and with friends, and in my research team's findings, one trend becomes overwhelmingly clear: Indian-Americans, perhaps for the first time ever, feel both acknowledged and respected by the president of the US.

“The president's historic support of the US-India relationship and the Trump campaign's sustained outreach to Indian-Americans at home has resulted in increased support and rising popularity among potential Indian-American voters,” Mason added.

How to prepare for and survive a tornado outbreak

SUV plows into news crew, others on Hollywood Boulevard

‘The status quo is not working’: Mountain town reckons with homelessness