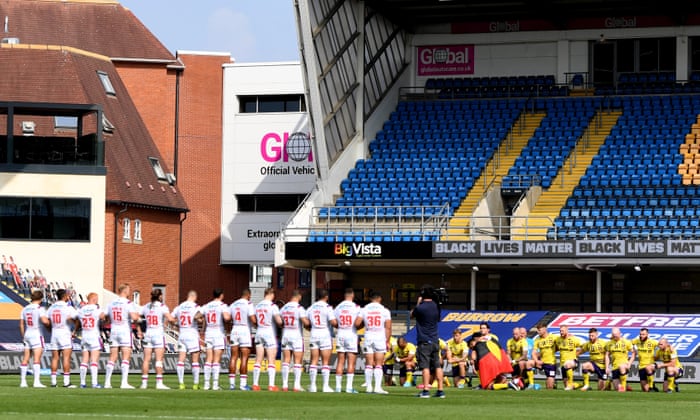 The owner of a Super League club whose players collectively decided against taking a knee has denied anyone involved is racist, insisting the decision was made to stand in solidarity with a player who said his religious beliefs prohibited him from making the stance.

Wakefield Trinity attracted criticism after their players did not kneel before their game against Wigan, with the squad instead opting to link arms and stand in unison. The likes of Israel Folau of Catalans have also not taken a knee since Super League’s resumption, but Wakefield’s owner, Michael Carter, has stressed his players were keen to send their own anti-racism message while also supporting those who did not feel comfortable kneeling.

“We have at least one player who was adamant that their religion did not allow him to kneel for anyone but God,” Carter told the Guardian. “I didn’t feel that was open to question and having spoken with one player privately, he had concerns about the reaction Israel Folau had received to the point he was actively considering standing down.

“My senior group said they were keen to support their teammate and if that meant standing alongside him, they would. However, they were also keen to show unity and send a strong message out that Wakefield Trinity does not condone racism. But equally, there is no way we will isolate someone for their religious beliefs. I think it’s important we explain our stance and not leave things open to interpretation. But this club is not racist.”

Carter said his players will do the same again this weekend, but reiterated: “We put a statement out pre-match insisting we endorse the Black Lives Matter message and are totally against any form of racism. There were eight non-white British players in our line-up on Sunday who stood shoulder-to-shoulder … how anyone can conceive what we did as racist is beyond me and incredibly disappointing.”

Carter admitted he has received messages of abuse from his club’s supporters on the matter, but admitted he, Wakefield and the game as a whole need to continue to educate on the message surrounding Black Lives Matter. “We will back any anti-racism campaign that comes from this.

“I’ve had messages of support from the RFL, though a disappointing lack of support from certain quarters. But when the RFL’s head of diversity, Alex Simmons, agrees that the stance we took showed a defiant stand against racism, what can we do? There’s an agenda with racism and people want to use it to create chaos.”