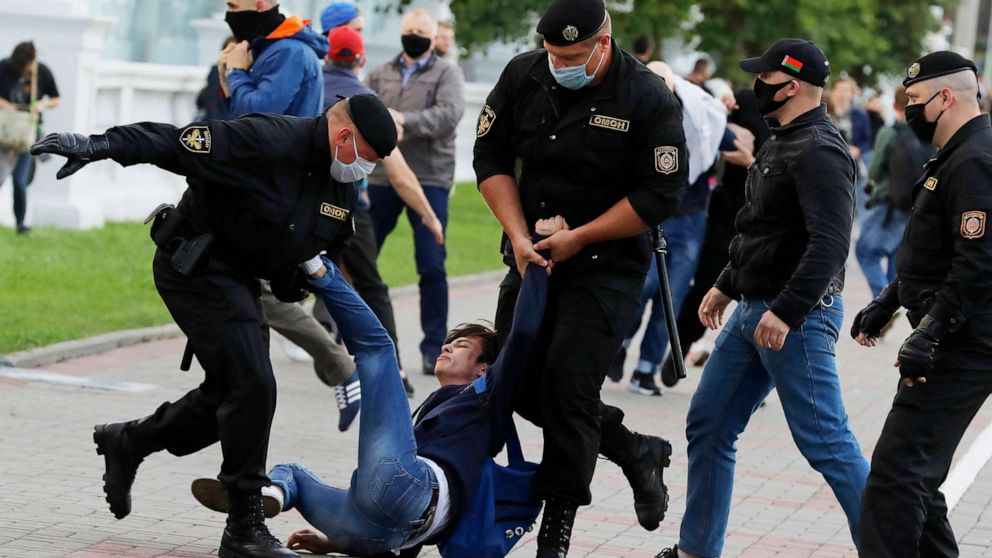 Belarus will conclude a presidential election on Sunday. The candidate favored to win is the same as the past 26 years — Alexander Lukashenko, the authoritarian leader who has ruled the former Soviet country since 1994.

The voting result is not in doubt, but instead of the smoothly controlled coronation that was expected, Lukashenko, often nicknamed “Europe’s last dictator,” is facing an unprecedented challenge to his rule.

Ahead of the election, Belarus has seen weeks of protests, fueled in part by anger at Lukashenko’s handling of the coronavirus pandemic. Tens of thousands of people have joined peaceful rallies in the capital Minsk, as well as thousands more in small towns across the country. A rally in Minsk last month was the largest demonstration in Belarus since the fall of the Soviet Union.

At the same time he is confronting the popular discontent, Lukashenko is facing other challenges on multiple fronts. There is greater discontent among Belarus’ elite and most significantly his relationship with Belarus’ key sponsor, Russia, has soured.

“Until now nothing has ever before seriously threatened his power. Now for the first time, he could lose it,” said Alexander Feduta, who was a campaign aide to Lukashenko in the 1990s and is now an analyst critical of him.

The protests have coalesced around three women, who are now leading the attempt to remove Lukashenko from office. At their head is Svetlana Tikhanovskaya, a former teacher who until a few weeks ago had been a stay-at-home mother.

Tikhanovskaya reluctantly stepped into the role after her husband, Sergey Tikhanovsky, a popular blogger was jailed and prevented from running in the election.

The other key opposition campaigns have united behind Tikhanovskaya. She’s joined by Veronika Tsepkalo, whose husband, Valery Tsepkalo fled Belarus with their children after being barred from the election. The third woman, Maria Kolesnikova, was the head of another popular candidate’s campaign, Viktor Babariko, a former banker who was jailed just before the election on alleged fraud charges.

“My first step was just for love, love of my husband,” Tikhanovskaya told ABC News in an interview in Minsk on Wednesday.

Tikhanovskaya’s campaign platform is simple: to free political prisoners and then call new free and fair elections within six months. She said she does not want to remain a politician if Lukashenko steps down.

The three women have focused on a wave of dissatisfaction with Lukashenko, based around anger over a poor economy and accumulated weariness with Lukashenko. But it has been given a jolt by Lukashenko’s dismissal of the coronavirus pandemic.

Lukashenko mocked the pandemic as global hysteria and refused to impose significant quarantine measures in Belarus, despite pleas from the World Health Organization. Government death statistics for COVID-19 have remained suspiciously low, even as the official count shows there has been at least 68,000 cases in Belarus.

Many Belarusians, however, took their own measures, keeping their kids home from school and forming their own volunteer groups to gather protective gear for health workers.

Yaroslav Romanchuk, an economist who ran as a candidate against Lukashenko in 2010 said the authorities’ response had reminded him of the Soviet reaction to the Chernobyl nuclear disaster in 1986.

“That was negligence, stupidity and arrogance in the same bottle. And that’s what made people so furious,” Romanchuk said. “The first kind of sign of massive protests was when parents, like myself, we did not let our kids go to school because of coronavirus.”

Lukashenko has responded to the protests by belittling the women and blaming them on foreign powers, which he has accused of seeking a revolution like that in Ukraine in 2014. He has lashed out not only at Western countries but also more directly at Moscow.

Last week, Belarusian security forces arrested said they had detained 33 Russian mercenaries in a resort near Minsk who they alleged had been sent to destabilize the election. Belarusian state TV aired video of special forces detaining the men, which they said belonged to Wagner, a catchall name for a Kremlin-linked private military contractor deployed in Syria and other hotspots around the world.

Lukashenko has claimed to uncover foreign plots before previous elections and many analysts said they suspected this was at least partly a pre-election spectacle. But the men detained this time also appear to be real, with some previously known to reporters as having fought in eastern Ukraine. The Ukrainian government has expressed interest in extraditing some of them.

Russian officials have said the men were en route to work as security contractors in an unnamed South American country.

Whatever the reality, the incident highlights the mistrust between Moscow and Lukashenko, which has worsened in the past few years and now poses an uncomfortable problem for Lukashenko.

Russia and Belarus are already heavily integrated, but recently, the Kremlin has pressured Lukashenko to accept a deeper union. Seeking to retain more independence, Lukashenko had turned to the West, in particular restoring relations with the United States, which for the first time in over a decade is due to post an ambassador in Minsk this year.

The fear for Lukashenko now, analysts said, is that the Kremlin might be open to him being replaced with another figure, provided they are friendly to Russia.

“It’s less and less likely that at a future critical moment of political tension in Belarus, the Kremlin will come to Lukashenko’s aid,” Artyom Schraibman, an analyst at the Carnegie Moscow Center wrote this week.

None of the past six elections in Belarus has been deemed free and fair by international observers. The key questions analysts say, is how many will protest if the vote appears heavily fabricated and whether Lukashenko uses force to disperse protesters.

In recent days, Lukashenko has also toured army bases and state television has shown heavily armed riot police running drills to disperse demonstrators. And authorities have started to block the big peaceful rallies led by TIkhanovskaya. On Thursday, soldiers set up a military camp in a Minsk park where her campaign had hoped to gather tens of thousands. Some smaller rallies were also dispersed with arrests.

Tikhanovskaya said if people protested after the election she would join them. She said if she was arrested after the vote she hoped an outcry from other countries would follow.

Protesters have said the atmosphere feels different from previous years, saying much of the fear has gone, though that could rapidly change. A violent crackdown though could trigger a worse crisis for Lukashenko, some observers said.

“He’s losing power. He’s losing it gradually, step-by-step, and he would lose power even faster” if Lukashenko responds to protests with force on the election days of Aug. 9 and 10, Romanchuk said.