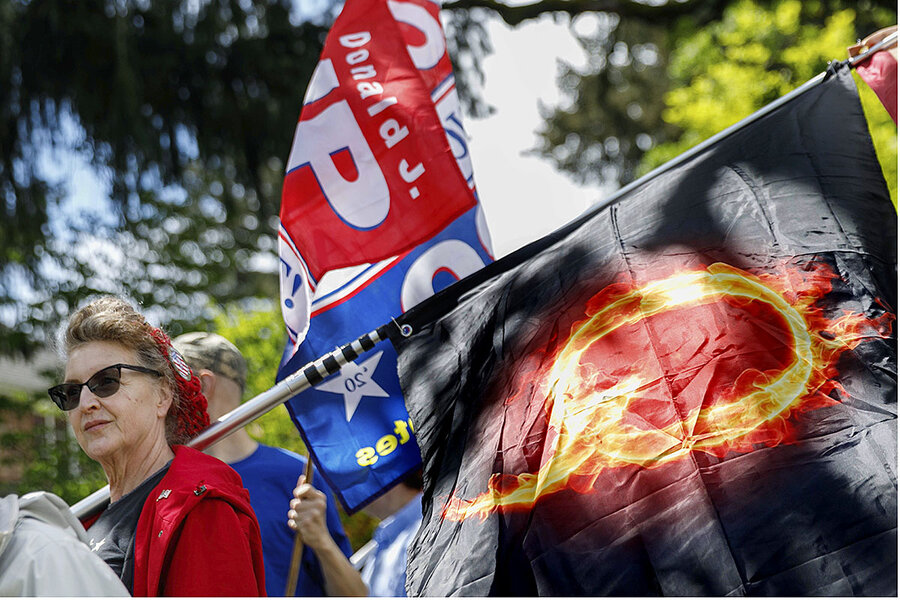 Harvard political scientist Nancy Rosenblum, author of “A Lot of People Are Saying: The New Conspiracism and the Assault on Democracy,” argues that QAnon represents a hybrid between traditional conspiracy theories and a new kind of thinking, what she calls “conspiracy without the theory.”

On the one hand, “it’s not about anything. Nothing has happened yet,” Professor Rosenblum says. “It’s a prophetic prediction.” Unlike traditional conspiracy theories, which seek to uncover evidence of secret machinations by the powerful, she says that the new form relies on bare assertions, repetition, and attacking sources of knowledge.

“It’s a closed system,” she says of QAnon’s theory. “The evidence against it is the evidence for it because the evidence comes from the enemy.”

“On the other hand,” she says, “QAnon does seem to have the apparatus of a theory.” And it’s one with an ominous historical resonance, she says. It links the enemy to sexual degeneracy. It says the enemy doesn’t deserve to live. And it has leaped from discussion boards to the real world.

“Q is this open source thing,” Professor Rosenblum says. “It has the characteristic of a participatory role-playing game.”

Why does QAnon matter?

Though it sounds like a fringe movement, it’s joining the Republican mainstream. This year, 63 QAnon supporters ran in congressional primaries in 27 states and received nearly 600,000 votes, according to Media Matters. Of these candidates, 13 are poised to be on the ballot in November. The most prominent of these, Marjorie Taylor Greene, a Georgia GOP candidate from a safe Republican district, called Q a “patriot” in a 2018 video.

QAnon has also made significant inroads into the White House. In 2018, President Trump invited a QAnon believer to meet him in the Oval Office. And, according to a November 2019 New York Times report, President Trump has retweeted accounts from QAnon and other promoters of “fringe” conspiracies 145 times. More recently, Michael Flynn, President Trump’s first national security adviser, posted a video in which he leads a small group in reciting, at the end of an oath of office, a QAnon slogan: “Where we go one, we go all.”

It’s very difficult to gauge QAnon’s popular support, but an investigation by the Guardian newspaper in June found more than 3 million followers supporting QAnon on Facebook, a number that is growing fast.

Kathryn Olmsted, a University of California, Davis political scientist and the author of the 2009 book “Real Enemies: Conspiracy Theories and American Democracy, World War I to 9/11,” says that QAnon is remarkable in both its complexity and its extremism.

“It’s quite elaborate,” she says. “It is extreme, though. Some of its theories seem quite outrageous to people who aren’t on the inside.”

She suggests that the complexity is part of QAnon’s appeal. “For many people a conspiracy is like a game, like a puzzle people can solve,” she says. “Once you have the internet, there are always clues online.”

How are social media platforms dealing with this?

On July 21, Twitter permanently removed about 7,000 accounts associated with QAnon, and limited 150,000 more.

In a thread posted on the platform via its @TwitterSafety account, the company announced that it will refuse to serve any accounts associated with QAnon. It also announced other measures to prevent QAnon content from spreading on its platform, including blocking URLs and limiting its appearance in search results.

The New York Times reported that Facebook, which in May removed several groups associated with QAnon, is set to take further measures against the movement. Two Facebook workers who spoke anonymously to the paper said that the company is coordinating with Twitter and other platforms and plans to make an announcement next month.

Twitter and Facebook are not the first to enact QAnon bans. In 2018, Reddit banned the QAnon subreddit r/GreatAwakening for violating the site’s policy against “inciting violence, harassment, and the dissemination of personal information.” Last month, the video-streaming company Roku removed a dedicated QAnon channel from its options.

Experts note that bans can be effective. Joan Donovan, of the nonprofit Data and Society, talked to Vice Magazine about her research on what happens when figures like Alex Jones and Milo Yiannopoulos are banned from large networks. “Generally the falloff is pretty significant,” she said, “and they don’t gain the same amplification power they had.”

But no ban can be 100% effective. For instance, The Guardian reports that many groups slipped Facebook’s dragnet in May by changing their name to “17,” a reference to Q’s position in the alphabet. Others simply relocated to conservative social media platforms like Parler and Gab.