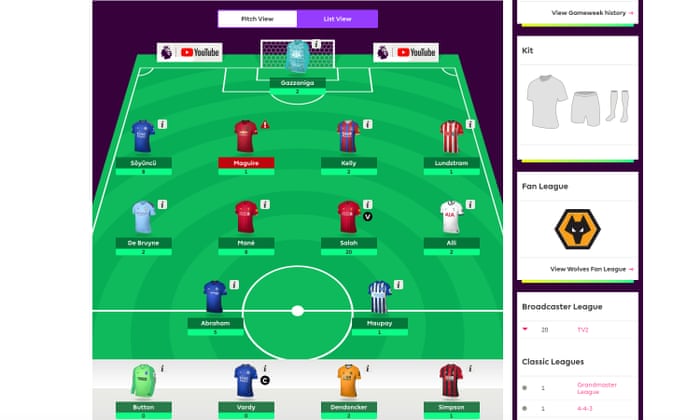 With millions of players around the world, the Fantasy Premier League is meant to recreate the competitive excitement and experience of managing a football team in England’s top division.

Instead, it has triggered an off-pitch row after this year’s champion was disqualified for allegedly offensive comments made “in a moment of frustration” about a Premier League player, understood to be the Manchester City striker Raheem Sterling.

Bulgarian Aleksandar Antonov had expected to be formally crowned champion after beating more than 7 million people to finish top of the table in the highly competitive contest. The game involves picking a squad of players from across the Premier League and hoping their real-life on-field performances are good enough to earn virtual points.

Instead, weeks after the season ended, he was informed on Tuesday morning that his profile had been deleted by the Premier League, with victory in the competition instead handed to a 29-year-old University of Oxford cancer mathematician, Joshua Bull.

As accusations he flew on social media, Antonov tweeted: “Can I just say quickly… I am not racist. OK, that’s all I had to say, bye.” He added: “The behaviour was explained to the [Fantasy Premier League] in two pages and I respect their decision… I would never say anything like that to a player with the intent to offend them, it’s a small chat with friends, in a different language and different culture.”

Unlike similar online competitions, the Fantasy Premier League is run directly by the Premier League, giving it an official status that others cannot match. This has attracted the likes of Norwegian chess champion Magnus Carlsen, whose fantasy team topped the table in December, only to drop back in the second half of the season. He finished in 11th place.

In a statement on Tuesday, the organisers confirmed that the team formally occupying the top spot had been disqualified for an unspecified “breach of our terms”.

“Following end-of-season checks, final standings have been updated within the game, leaving Southampton fan Joshua and his team, the Bulldozers, top of the table,” said the Premier League.

Antonov did not respond to requests for comment, but in a YouTube video he said he had not cheated. Instead, comments he made in a private group chat about a specific player had been sent to the Premier League: “The reason for my disqualification is a moment of frustration with a player, put into words, written between friends. It was never meant to offend any footballer. It is not something I posted or said directly towards a footballer.”

He did not clarify which comment had been “taken out of context” but emphasised that he had lived in the “very multinational” UK for the last decade and enjoyed his time with “different ages, nationalities, races”.

“I would never in a million years say to the player what I said in a small chat to friends … I would likely ask them for an autograph if I ever met them.”

Fantasy Premier League has created a thriving online culture, with competitors regularly swapping tips in an attempt to outperform friends, family and workmates. Despite the prizes being little more than a pair of VIP tickets to Premier League matches and a games console, there are popular Twitter accounts and Reddit pages dedicated to sharing tips on how to improve the performances of teams and maximise the points available.

Bull, who studies how cancer spreads through the body, said he was shocked when he was told of his delayed victory: “I was expecting to hear something from the Premier League at some point because I’d come second. But then the email that came through said the guy ahead of me has been disqualified for some reason and I’m going to be crowned champion.”

Despite registering as a Southampton fan to take part in the competition, in reality Bull is a long-suffering supporter of League One’s Ipswich Town: “The idea is that you pick players that you think will do well, and it gives you something else to cheer when the games are on. I don’t really support any of the Premier League teams, so it’s a way of having a bit involvement.”

He said there was some crossover with his day job specialising in mathematical oncology. “I’m trying to do the same modelling and forecasting as mathematicians are doing with coronavirus – but within a person,” he said.

“It’s a little bit like poker; there’s a huge element of luck involved. Sometimes you make a good decision that doesn’t pay off, sometimes you make a bad decision that does. For me as a mathematician, I was thinking about it from the view that there’s a huge amount of variance involved. You’ve got to be lucky and you’ve also got to have some strategy.”

Bull declined to comment on the reasons for Antonov’s disqualification and said he had only signed up to the Fantasy Premier League to compete with his family. He said he had not expected to become so deeply involved in the game, but as the season progressed and he gained a chance of becoming world champion, he spent more and more time on it.

“My sister has beaten me every year since for ever. This year I decided I would take it seriously and try and beat her. She’s very annoyed because she’s the real football expert in our family and now people keep asking me.”

Six Nations: Scotland’s rearranged game against France in Paris will be played on March 26