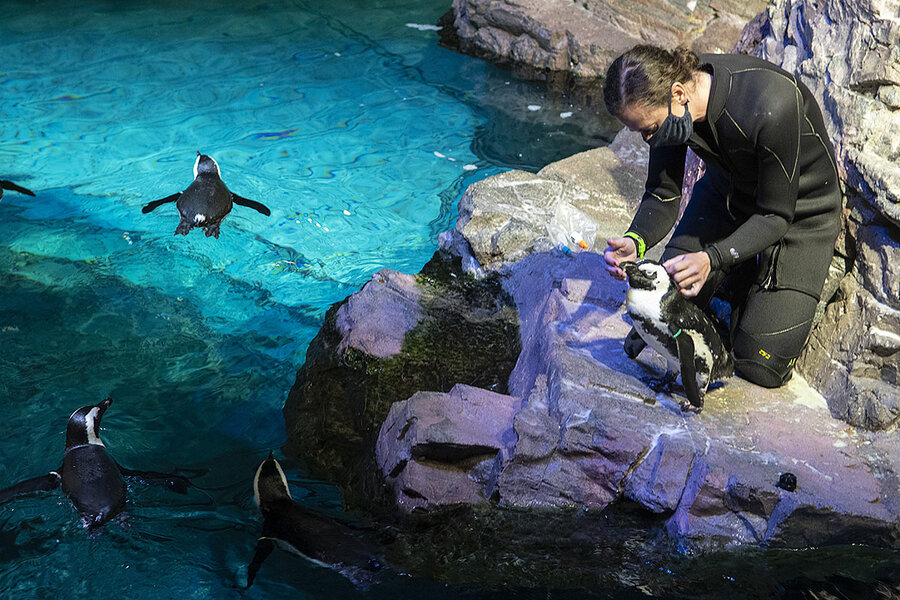 A video posted on the New England Aquarium’s Facebook page shows a group of penguins waddling around the rocks in the Boston aquarium’s giant ocean tank. Seemingly indifferent to the crowd noises, they follow their beloved routine – sliding off the wet rocks into the pool, emerging, shivering the water off their bodies, and plunging back into the pool – all set to the rhythm of treats tossed into their vivid orange beaks.

But something is different. There are no actual visitors.

As the pandemic filled the aquarium with unusual silence, biologists had to get creative. To help the animals transition in and out of the lockdown smoothly, they played recordings of crowds from portable speakers.

Globally, more than 700 million people visit zoos and aquariums each year. But when the pandemic put the world on pause, animals used to daily human presence were deprived of visitors. Amid the eerie silence, say animal keepers, some animals were disturbed, others appeased.

Animals at zoos and aquariums are having their own lockdowns and tentative reopenings, and, thanks to our shared evolutionary heritage, their experiences might be more like ours than we think, says Leigh Clayton, vice president of animal care and welfare at the New England Aquarium. Like their human counterparts, animals, too, showed resilience and adaptability in unprecedented times.

Wild animals tend to be more resilient, says Brian Aucone, senior vice president for animal sciences at the Denver Zoo. They deal with variation daily and adapt to unexpected changes in routine. For captive animals, whose routine is dictated by regular feedings and cleanings of their cages or tanks, things are different.

“We don’t want them to be afraid. We want them to go with the flow like they would naturally,” Mr. Aucone says. “And so we actually work through that with our animals as well. So we try and prepare them for the unexpected, so that when it happens, they just go with it.”

By slowly introducing new elements into captive animals’ routine, they can easily adapt.

Dr. Clayton and the team at the New England Aquarium understood that. There, the animal keepers worked to spread out that transition, by adjusting the lighting in tanks gradually, keeping feeding and cleaning schedules the same, and slowly increasing staff presence before reopening.

At the aquarium, they played sounds of crowds to desensitize the birds. At the Denver Zoo, staffers would spend extra time keeping an emu or a giraffe company. At the Stone Zoo, in Stoneham, Massachusetts, the staff gave a bubble machine to the gibbons. During their coffee breaks, animal keepers sat with Dunkin, a North American river otter who seemed to miss attention from visitors. Just like many humans, animals needed an extra hand transitioning in and out of the lockdown.

But whether they needed a few bubbles or an extra wave from staff, the animals adapted a lot better than Americans did, says Pete Costello, assistant curator at Stone Zoo.

In Colorado, Mr. Aucone echoes that thought. “We try and control what happens around us,” he says. “The animals just deal with it.”

“The zoos have probably learned a little bit from this whole pandemic that many animals do very well without the public,” he says. “And so giving them that option, I think, is important.”

“Here for each other”

It’s 10 a.m. at the New England Aquarium. Two weeks after reopening, only a handful of visitors are approaching the main entrance, waiting under the sun to get in line.

“Walk like a penguin,” a sign advises visitors as they enter, encouraging them to follow the one-way traffic and respect social distancing. Before the pandemic, during a normal summer day, the aquarium could welcome 1,600 visitors in an hour. Now, that’s the maximum number of visitors coming through in an entire day.

“We’re happy it’s open, and we’re happy there are not a huge amount of crowds,” Mr. Cutter says. “People aren’t on top of you,” he adds, relieved to see the safety procedures in place.

“You can’t have that when it’s crowded,” Mr. Cutter says, pointing to the tank filled with colorful fish he was looking at, no other visitors surrounding him.

“I believe in supporting the aquarium,” he says, adding that now is the perfect opportunity to support museums, zoos, aquariums, and the city as the pandemic ravaged the economy.

As zoos and aquariums across the country were forced to close mid-March, at the beginning of the busiest season, administrators have been forced to trim budgets through layoffs and pay cuts.

“We’re very excited to have guests back. And it’s been a struggle at times. But most zoos and aquariums continue to struggle with the limited numbers and such,” Mr. Aucone says.

As the day advances at the aquarium, visitors slowly start to congregate around the tank of the penguins, unfazed by the groups of mask-wearing families staring down at them. A 3-year-old named Mateo points to the penguins playing in the pool. “Hi, penguins!” he says.

If the pandemic brought humans closer to each other, it might have reinforced the bond between humans and animals as well.

Coronavirus has an optics issue