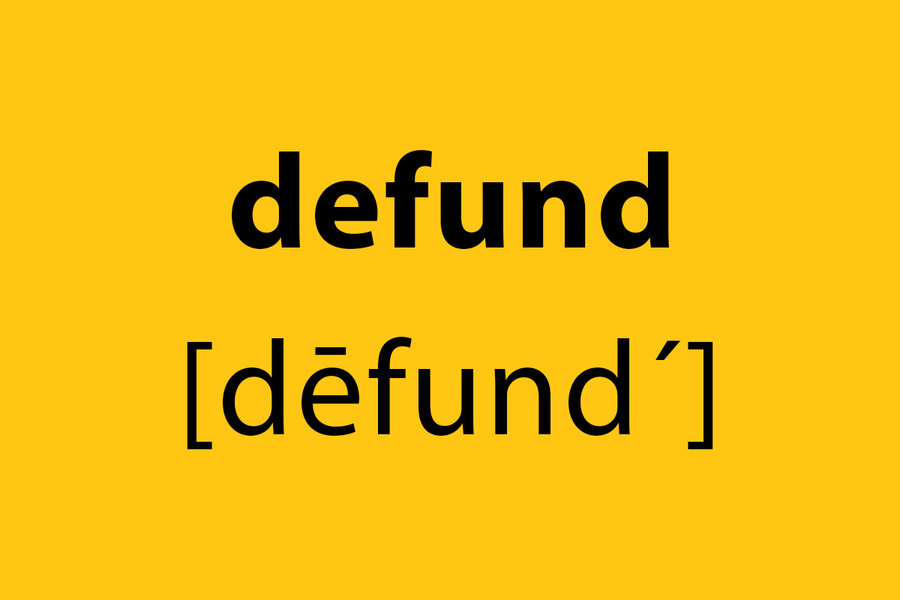 The slogan “Defund the police” has been shouted during protests over the May 25 death of George Floyd. Merriam-Webster defines defund as “to withdraw funding from.” The Cambridge Dictionary puts it in plainer terms: “to stop providing the money to pay for something.” This rallying cry seems crystal clear and quite radical: Stop giving money to police departments.

It turns out to be a lot more complicated, as the Monitor reported in a June 7 article, “‘Defund the police’: What does that mean exactly?” For some people, defund does indeed translate to “get rid of,” as activist Mariame Kaba writes in the New York Times opinion column “Yes, We Mean Literally Abolish the Police” (June 12). Yet the majority of protesters don’t seem to take it literally, understanding it instead as a call to redirect some funds away from police departments and into other community services.

Some language experts argue that the ambiguity of “Defund the police” makes it useless. Branding consultant Nancy Friedman writes, “Whenever you have to explain a slogan by saying ‘What we really mean is …’, it’s a bad slogan and you’re losing the argument.” How can people protest in support of a phrase if they can’t agree on its meaning?

Perhaps, though, the slogan serves its purpose. Democratic-leaning voters are spread across an ideological spectrum. Slightly fewer than half consider themselves to be “liberal,” while 51% identify as “moderate” or “conservative,” according to the Pew Research Center. (Two-thirds of Republicans, in contrast, identify as “conservative.”) “Defund the police” appeals to both poles. Progressives can read it as “abolish” and centrists as “reform” or “reallocate resources from,” with the understanding that the details will be hammered out later.

The fact that the slogan needs explanation is a plus. Protesters may disagree about what defunding the police should involve, but they share the view that police violence against Black people can only be eradicated by restructuring many parts of American society. “Defund the police” serves as a quick, catchy way into a larger, more complex story.

When people search for “What does defund the police mean?” they retrieve hundreds of articles and videos, from The Atlantic to Fox News, which explain the racial, economic, and political issues behind the phrase. Its very ambiguity opens a door to nuanced discussions, which can be rare in politics. Political comedian John Oliver explains the slogan as “moving away from a narrow conception of public safety that relies on policing and punishment, and investing in a community’s actual safety net: things like stable housing, mental health services, and community organizations.” That meaning of defund is not in any dictionary.

People who lent their names to words