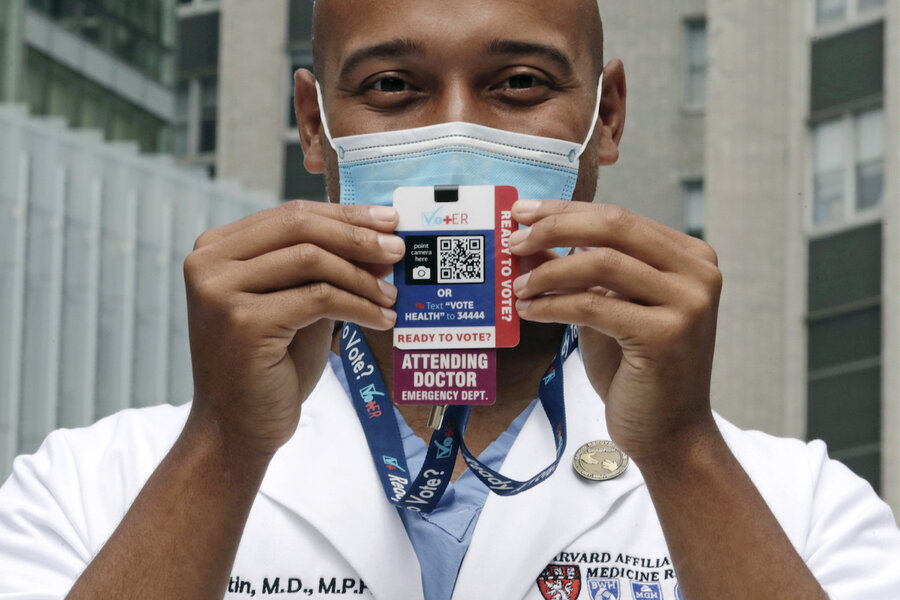 An emergency room doctor in Boston is assembling thousands of voter registration kits for distribution at hospitals and doctor’s offices.

Later this month, students at Harvard and Yale’s medical schools are planning a contest to see which of the Ivy League rivals can register the most voters.

And a Rhode Island physician has launched an effort to get emergency ballots into the hands of patients who find themselves unexpectedly in the hospital around Election Day.

Amid the dual public health crises of COVID-19 and racism, some in the medical community are prescribing a somewhat nontraditional remedy: voting.

Hospitals, doctors, and health care institutions across the country this month are committing to efforts to engage Americans in the election process as part of Civic Health Month, a nationwide campaign that kicked off Aug. 1.

Hospital networks in Arizona, Kansas, Missouri, Pennsylvania, North Carolina, Wisconsin, and elsewhere are among more than 60 institutions participating, along with thousands of individual physicians.

Benjamin Ruxin, a Stanford University graduate student who heads the campaign, said the coronavirus pandemic underscores the importance of ensuring everyone can vote and help shape health care policy for the challenging times ahead.

Voter registration rates are down almost 70% in some states this election cycle because the traditional ways of registering voters have been curtailed by the pandemic, including DMVs and in-person registration drives, he said.

“We’ve been trained to solve these really complex health problems, but not everything we see can be treated with a prescription,” he said. “The health care system does not work for vulnerable people – full stop. We have to help them get involved in the political process if we hope to change any of this.”

The sheer number of organizations and the range of efforts being proposed during the monthlong campaign shows that the medical community is increasingly shedding its reticence at civic engagement, said Kelly Wong, an emergency medicine resident at Brown University in Providence, Rhode Island.

Where prior generations may have seen the voter registration and other nonpartisan election work as outside their purview or too overtly political, newer medical professionals see civic engagement as a crucial part of “treating the whole patient,” she said.

Ms. Wong founded Patient Voting to get doctors and other hospital staff to commit to helping patients request, cast, and submit emergency ballots when the time comes. The nearly three-year-old organization’s website is also a repository of verified information about every state’s emergency ballot process.

Another effort, called Med Out the Vote, is focused on getting medical students registered to vote and encouraging them to organize voter registration efforts on campus where possible.

Jonathan Kusner, a Harvard Medical School student who co-chairs the effort, said students at dozens of institutions have expressed interest, with a number looking to host head-to-head voter registration competitions against rival schools.

Medical students at the University of North Carolina recently bested their counterparts at Duke in a three-day contest that resulted in more than 500 total new voter registrations and requests for mail ballots, he said. Harvard and Yale students are planning a similar competition, as are those at Penn State and Ohio State.

Mr. Martin, meanwhile, said VotER is struggling to keep up with more than 15,000 orders for its “Healthy Democracy Kits,” which include a badge and lanyard that doctors and other hospital staff can wear while on the job.

The badges have a QR code that, when scanned by a person’s smartphone, will take them to TurboVote, an online tool that can guide them through the voter registration process and send them reminders about election deadlines. A helpline is also available to field any questions, he said.

“We’re underwater and trying to get out these kits as fast as we can,” Mr. Martin said. “It’s a good problem to have, but at the same time, I wish this wasn’t something that had to be done. Being able to vote should be automatic for all citizens.”