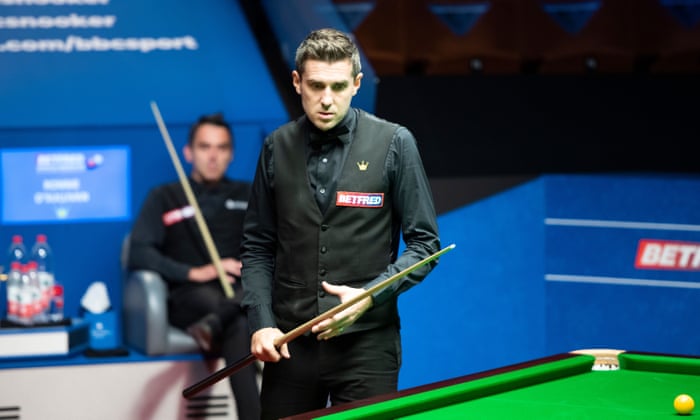 Mark Selby turned the tables on a frustrated Ronnie O’Sullivan as he fought back to take a 9-7 lead in the world championship semi-finals at the Crucible in Sheffield.

Selby, who had managed to cling to O’Sullivan’s coat-tails at 5-3 down by winning the final frame of a difficult first session on Wednesday, took the first four on Thursday afternoon before holding his nerve to win the second and last after the interval for a 6-2 return.

O’Sullivan, who had been decidedly unhappy with the amount of kicks he had suffered on Wednesday, was left shaking his head again as another cost him an easy black when he was in pole position to take the first frame.

Selby got the better of a prolonged bout of safety play to edge himself to within a frame and they were level after the next when he put together a break of 97, his highest of the match.

O’Sullivan’s fluency had deserted him and having been among the balls twice only to miss blue and then black, he saw Selby clinch a fourth successive frame to take a 6-5 lead after sinking a fine long red.

He made it a clean sweep before the mid-session interval after O’Sullivan had once again got in first, but it was Selby who faltered on the resumption as his opponent took full advantage of a poor attempt at a red to rattle in a decisive 87 and pull it back to 7-6.

A break of 61 following a missed blue by O’Sullivan proved sufficient for Selby to restore his two-frame advantage but, after he had left a difficult red in the middle in the 15th, O’Sullivan compiled a run of 82 without reply to peg him back once again.

He was left rapping his knuckles on the table, however, after failing to drop a difficult pink as the session drew to a close, in the process handing Selby the opportunity to make it 9-7 with a break of 76.

Kyren Wilson took control against Anthony McGill to establish a 13-11 lead. McGill was four frames ahead overnight but won five of the 16 played on Thursday to leave himself with an uphill battle.

Wilson had stormed back in the morning session to win six of the eight frames and level at 8-8 but if McGill was stunned by the one-sided nature of that session he did not show it. In the evening he was on course for a 147 until he missed the seventh red into the corner. McGill still won the frame comfortably but a missed black in the next allowed Wilson to make a decisive 99 break, with only a failed yellow denying him his third century of the match.

Two tight frames were exchanged in which Wilson rediscovered his free-flowing style before the interval with a break of 116, giving him the lead for the first time. Wilson extended his advantage in the next frame and, as McGill continued to struggle, another century break – this time 105 – put the Englishman 13-10 ahead.

McGill might have been facing a sleepless night over the way his fortunes had fallen so dramatically, but he regathered his composure to produce his first Crucible hundred this year – a superb effort of 136.