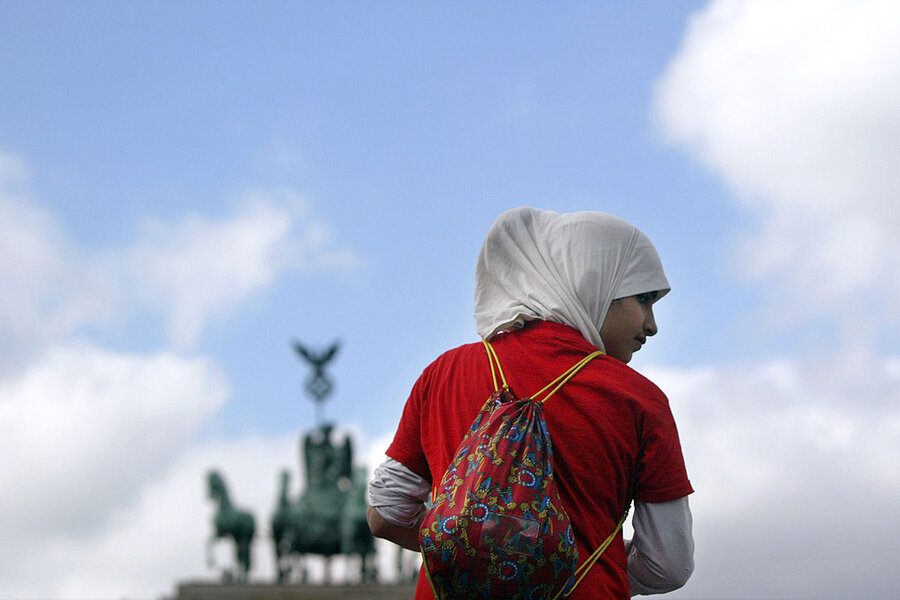 Israa Alsabagh started wearing a headscarf to school when she was 10 years old.

A practicing Muslim born and raised in Germany, she had begged her mother to let her wear the head covering. When she finally wore it to class for the first time, “I had the feeling everyone was looking at me, because I looked different.”

Over time, it became clear her classmates wouldn’t be problems. It was older teachers – and strangers – who were occasional headaches. “Every once in awhile, I’d get a dumb remark [from a teacher] like, ‘Well, why don’t you ask your God?’” says Ms. Alsabagh, now 16 years old. Another time, a stranger on the metro asked, “‘Go home, what are you doing here?’”

“I always answer, ‘I am German. My mom is German, too,’” Ms. Alsabagh says. “And they are always surprised.”

While much attention has been shone on anti-Semitism in Germany, anti-Muslim bigotry is potentially even more damaging to the country’s social fabric by targeting a group 5 million strong, compared to Germany’s roughly 150,000 Jews. The incidence of anti-Muslim hate is on the rise. Transgressions range from daily microaggressions (everyday slights, conscious and unconscious, that reinforce discrimination) to horrific attacks that capture national media attention, such as the February 2020 Hanau shooting in which a far-right extremist targeted two hookah bars and killed nine people, or the murder of the pro-refugee politician in the state of Hesse by a neo-Nazi in June of last year.

Progress towards acceptance of Germany’s second-largest religious group after Christianity has come in fits and starts. The German government has promised more security at mosques this year. But at the same time, the interior minister halted an audit of racial profiling by the police, in a country where the largest racial minority groups are predominantly Muslim. And, last month, the German state of Baden-Württemberg banned children from wearing hijabs and niqabs in school.

“About half the population sees Islam as a threat, and the picture has become cemented,” says Yasemin El-Menouar, a researcher at the German research foundation Bertelsmann Stiftung. “But 15 or 20 years ago German society had much to say about Muslims, while they didn’t get to speak. Now we have a generation [of Muslims] who were raised here, are well educated, and who say, ‘I have a right to be here and be part of the discussion.’”

‘Racism is a dynamic phenomenon’

Lamya Kaddor is one of that generation.

An author, activist, and teacher, she has fielded countless questions from colleagues when she teaches her classes on Islam. They include, “‘Are you teaching students to build bombs?’ or ‘How can such an emancipated woman like yourself teach such antiquated beliefs?’” says Ms. Kaddor, author of the 2010 book “Muslim, Female, German!”

Other times people might say, “‘Go back to Turkey.’ No one cares that I’m not actually from Turkey,” she says. Meanwhile, media continue to associate Islam with violence or oppression, and Muslims are now suffering more severe exclusion than Jews, both in the rates and in the scope of alienation, says Ms. Kaddor, who has studied both anti-Semitism and anti-Muslim sentiment.

“Unfortunately many Germans think racism has been defeated in our country because Adolf Hitler isn’t here anymore,” says Ms. Kaddor. “But racism is a dynamic phenomenon. It adapts quickly and adjusts to societal conditions.”

Those conditions include Germany’s intake of a million refugees in 2015, after Chancellor Angela Merkel suspended a protocol to send them back to other “safe” countries. The influx of migrants, mostly Muslims from Syria, Iraq, and Afghanistan, helped trigger the rise of a far-right political party that campaigned partly on an anti-Muslim platform. In 2017 it won 94 seats in Germany’s federal parliament.

Politics, media, and society must change, says Ms. Kaddor, who adds that she has received death threats once she began publishing books. “It’s about seeing Muslims as victims and active members of this society. As equal Germans.”

Young Germans are growing up in a society that’s the most ethnically diverse in generations. That means they’re ideally coming into contact with people of all kinds, who practice all sorts of religions.

On religious acceptance, there’s progress. German society is already starting from a strong base of tolerance of all religions, save Islam, points out Ms. El-Menouar of Bertelsmann Stiftung. Her research also shows that contact between people of different religions is key to dismantling stereotypes, and that results are strongest among young people. “We need to deconstruct social distance so you realize people who practice a different religion aren’t necessarily that different.”

This work is critical, she says, especially as the Muslim population will only increase in Germany and across Europe. And, as Germany’s population continues to age, migration will help relieve a graying labor force, with many of those new immigrants likely to be Muslim.

Back in Berlin, Ms. Alsabagh has faith in people. “Racism doesn’t come intrinsically. It is something that is taught to you,” she says. “After [exposure], people are more open. I think the generation after us will be more open as well.”

In fact, with the last teacher who gave her trouble, she began pushing back with remarks of her own. Then, five or six fellow students spoke with him on Ms. Alsabagh’s behalf. “They sat down with my teacher. And it did get better.”

There’s hope, she says. And social media is a powerful force to help connect people, and also enable talk about differences and individualities. “Never get riled up,” she says she has learned. “That doesn’t help. It only reinforces the opinions they have.”