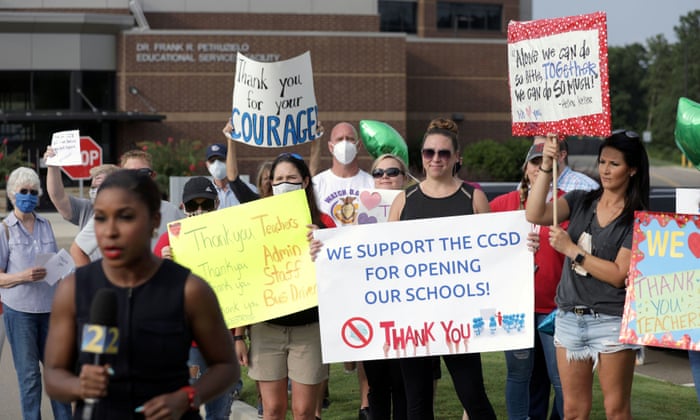 An exponential rise in Covid-19 cases among children in the US has raised the alarm among experts as the new school year begins.

A recently released study from the American Academy of Pediatrics and the Children’s Hospital Association found that nearly 339,000 coronavirus cases among children have been reported across the nation since the start of the pandemic, with 97,000 cases reported just in the last two weeks of July.

The findings add concern to troubling reports emerging from places that moved early to reopen schools. The day after classes resumed for one Georgia school district, a second-grade student tested positive for coronavirus, sending his teacher and classmates home for a two-week quarantine. The same week, Georgia’s department of health confirmed the death of a seven-year-old boy, the state’s youngest to die from the virus. He had no underlying health conditions.

Linda Rosenstock, a professor of health policy and dean emeritus of UCLA’s Fielding School of Public Health, said the surge in cases among young people was a reflection of the widespread toll the virus has taken across the country.

“A fair interpretation of this data is that as cases rise, more children are infected. In the same way the lockdown helped slow the rise, when restrictions were loosened, we saw more cases overall,” said Rosenstock. 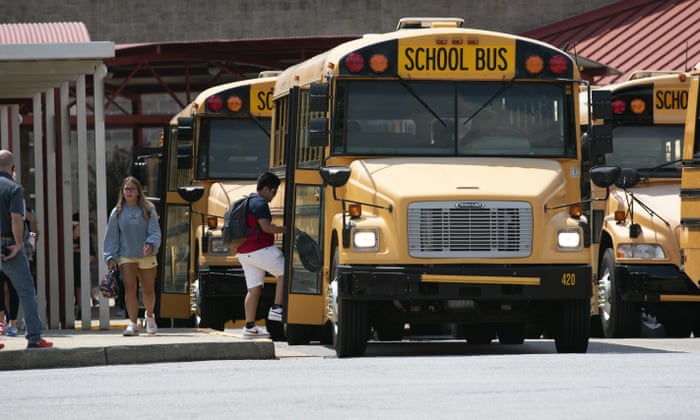 “It reflects the state of the pandemic that is running unabated in the US at the moment,” she added. “If you try to reopen in places where the disease is raging, we’d see a rise of cases among children.”

Rosenstock said the fact that fewer children were tested earlier in the pandemic may have fueled a “myth” that children were not at risk of infection. While research suggests that children tend to have milder symptoms than adults, she said the new data attests to the fact children can still infect adults, whose symptoms can be more severe.

The findings undercut assumptions that children are unlikely to catch and spread coronavirus to adults and other children – a claim Donald Trump seized on to make a case that schools should reopen for in-person instruction this fall.

What we know about kids and coronavirus in the US

The nation’s understanding of how coronavirus affects kids has evolved during the pandemic. Experts say the new study further confirms that children can play a significant role in spreading the virus and that, in rare cases, infections can lead to severe illness or death among youth.

Nationally, children represent 8.8% of all Covid infections, according to the report from the American Academy of Pediatrics. About 70% of the new cases reported among children in July came from states in the south and west, where coronavirus has ripped through the population.

California, which late last month saw its first death of a child due to Covid, has reported more cases than other state. But its share of infected children relative to the overall population puts in the middle of the pack, just above the national average. Wyoming, Tennessee and New Mexico top the per-capita infection rates for children; in all three states, children account for more than 15% of all cases.

Children represent less than 4% of hospitalizations from the virus and account for less than 1% of Covid-related deaths in states that reported results. Twenty states reported zero child deaths.

Katherine Williamson, a pediatrician in southern California’s Orange county and a spokeswoman for the American Academy of Pediatrics, said the findings also indicated that the virus impacts children differently across age groups.

Children younger than five tend to be least symptomatic, Williamson said, and outbreaks among children and teachers at care centers and preschools remain low. The risk goes up for children aged five to 10, and children over 12 appear to have more adult-like symptoms, she said.

“The hard part is that because young children are less symptomatic, we may miss the symptoms and neglect to test them,” Williamson said.

What it means for reopening schools

The report comes as states and regions across the country wrestle with how to safely reopen schools for in-person instruction this fall, a decision with both academic implications for children and economic consequences for parents hoping to find childcare and return to work.

But cautionary tales have emerged. In late May, days after Israel opened schools, infections tied to a Jerusalem high school ballooned into a devastating outbreak.

In Georgia, a summer camp that opened in late June sparked an outbreak that infected more than 75% of the 344 campers and staff members who were tested. In that instance, staff members wore face masks, but children were not required to.

That responses to the coronavirus are determined by state and local decision-makers complicates a uniform response to combating the spread of the virus.

In July, on the same day that school chiefs in Los Angeles and San Diego announced they had start the school year online, the Orange county board of education recommended its schools reopen without the use of masks or social distancing. Officials cited as part of their argument a report that appeared backed by a cadre of medical experts. 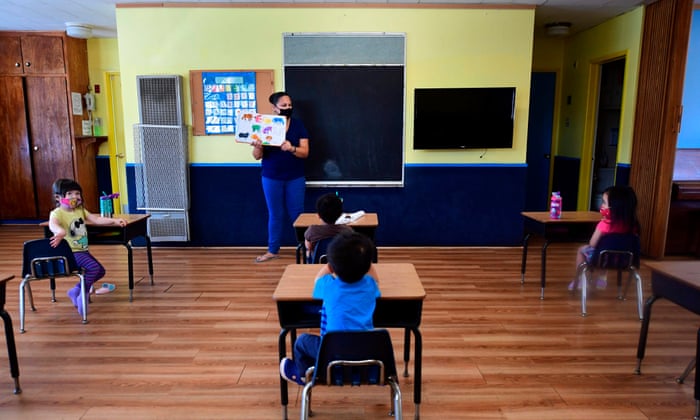 In the days following the report, however, multiple experts distanced themselves from the work, saying they had never been consulted for the final report.

The American Academy of Pediatrics was not consulted for the report, nor does it endorse the recommendations to return to school without safety measures, Williamson said.

“We have a fairly good idea of how to decrease the risk of spreading the virus in schools through social distancing, masking, hand-washing, and screening for systems before students enter school,” Williamson said. Just as important, she added, was consistent enforcement of the safety measures.

“That last piece is where places got in trouble. They started getting lax about the rules and then cases went up,” said Williamson.

John Swartzberg, a clinical professor emeritus of infectious diseases and vaccinology at UC Berkeley’s school of public health, said the timing of the case surge highlighted by the report did not bode well for a return to in-person instruction in the near future.

“The very significant increase in cases occurred when children were out of school, which suggests that if we put children back in school, it will exacerbate the problem,” Swartzberg said.

“Putting people together – whether they’re children or older adults – is the worst thing you can do in the face of the pandemic,” he added.

Swartzberg said that even schools in regions where cases remained low could not completely eliminate the risk of infections, but they could mitigate that risk through the use of masks, hand-washing and social distancing.

Mitigation efforts, however, will cost extra money: additional classrooms would have to be used to put distance between students, which would require more teachers.

“For the bulk of public schools in the US, which have been horrifically underfunded for so long, where are those resources going to come from? At schools I know in the Bay Area, teachers buy paper and colored pencils for the kids because the school district can’t do it. And that was before the pandemic,” Swartzberg said.

“Putting children back in school, sending students back in universities, is a great experiment,” he said. “We have no idea what’s going to happen.”