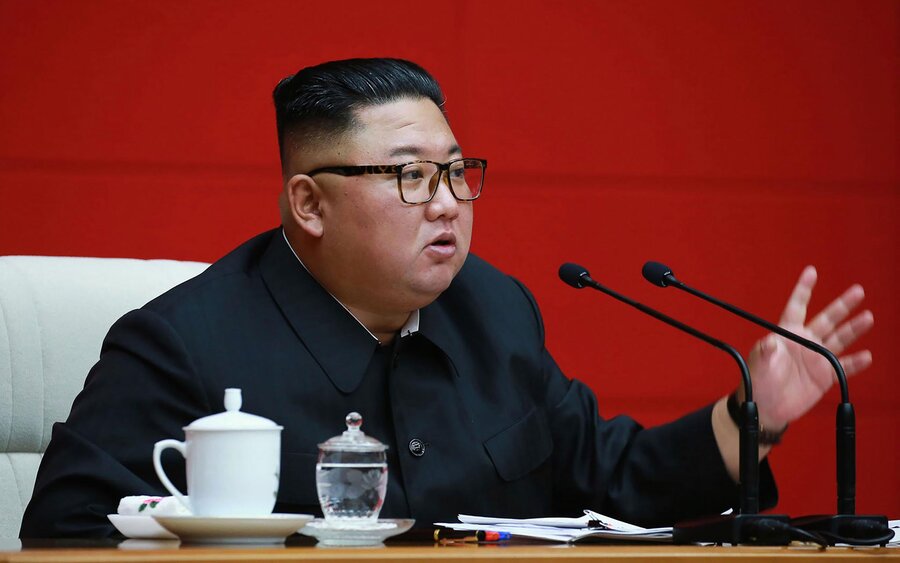 North Korean leader Kim Jong Un lifted a lockdown in a major city near the border with South Korea where thousands had been quarantined for weeks over coronavirus worries, state media said Friday.

But Mr. Kim, during a key ruling party meeting on Thursday, also insisted the North will keep its borders shut and rejected any outside help as the country carries out an aggressive anti-virus campaign and rebuilds thousands of houses, roads, and bridges damaged by heavy rain and floods in recent weeks.

Entering the last year of an ambitious five-year national development plan, Mr. Kim in December declared a “frontal breakthrough” against international sanctions while urging his nation to stay resilient in a struggle for economic self-reliance.

But experts say the COVID-19 crisis likely thwarted some of Mr. Kim’s major economic goals by forcing the country into a lockdown that shut the border with China – the North’s major ally and economic lifeline – and potentially hampered his ability to mobilize people for labor.

During Thursday’s meeting, Mr. Kim said it was clear after three weeks of isolation measures and “scientific verification” that the virus situation in Kaesong was stable, and he expressed gratitude to residents for cooperating with the lockdown, KCNA reported.

Mr. Kim said his country now faces a dual challenge of fending off COVID-19 amid a worsening global pandemic and repairing damage from torrential rain that lashed the country in past weeks.

KCNA said 97,100 acres of crops were ruined nationwide and 16,680 homes and 630 public buildings destroyed or flooded. It said many roads, bridges, and railway sections were damaged and a dam of an unspecified power station gave way. There was no mention of any information related to injuries or deaths.

Mr. Kim expressed sympathy with people who were at temporary facilities after losing their houses to floods and called for swift recovery efforts so that no one is “homeless” by the time the country celebrates the 75th anniversary of the ruling Workers’ Party’s founding on October 10.

“The situation, in which the spread of the worldwide malignant virus has become worse, requires us not to allow any outside aid for the flood damage but shut the border tighter and carry out strict anti-epidemic work,” KCNA paraphrased Mr. Kim as saying.

Mr. Kim’s public rejection of international aid for flood recovery and his decision to release Kaesong from quarantine are negative indicators for inter-Korean cooperation as South Korea had hoped to restart diplomatic engagement by providing support in these areas, said Leif-Eric Easley, a professor at Ewha University in Seoul.

North Korea in past months has severed virtually all cooperation with the South amid a stalemate in larger nuclear negotiations between Washington and Pyongyang, which faltered over disagreements in exchanging sanctions relief and disarmament steps.

The North in June blew up an inter-Korean liaison office in Kaesong, following months of frustration over Seoul’s unwillingness to defy U.S.-led sanctions over its nuclear weapons program and restart joint economic projects that would help the North’s broken economy.

“The North Korean economy, while touting self-reliance, is increasingly dependent on China and will struggle to balance sanctions-busting efforts and COVID-19 prevention,” Mr. Easley said. “The job of North Korea’s new premier will be to show the country has recovered from recent flooding and has upgraded public health facilities” by the October party anniversary, he said.

In late July, Mr. Kim ordered a total lockdown of Kaesong and had the nation shift into a “maximum emergency system” after the North reported it found a person with COVID-19 symptoms.

The North’s state media said the suspected case was a North Korean who had earlier fled to the South before slipping back into Kaesong. But South Korean health authorities say the person hadn’t tested positive in South Korea and never had contact with any known virus carrier.

North Korea later said the person’s test results were inconclusive and still maintains it is virus-free, a status widely doubted by outsiders. Some experts said the North was likely trying to shift the blame over a possible spread of the virus to South Korea.

In an email to The Associated Press last week, Dr. Edwin Salvador, the World Health Organization’s representative to North Korea, said the North has told the U.N. agency it quarantined 64 first contacts of the suspected Kaesong case and 3,571 secondary contacts in state-run facilities for 40 days.

Since the end of December, North Korea has quarantined and released 25,905 people, 382 of them foreigners, Mr. Salvador said.