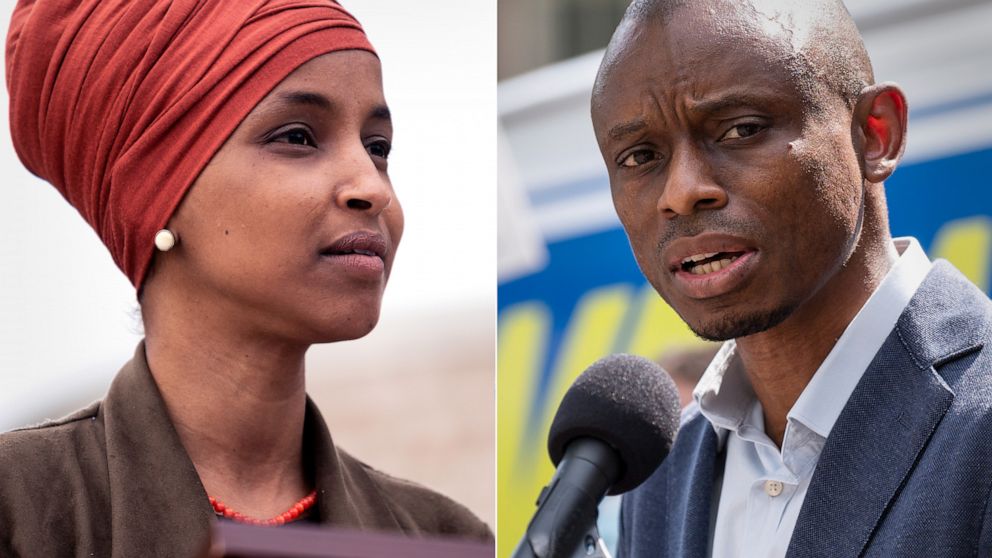 Rep. Ilhan Omar won one of the most closely-watched and most expensive primaries in Minnesota on Tuesday, according to a projection by The Associated Press. She beat her primary opponent, Antone Melton- Meaux, by just over 28,000 votes at the time the race was called, or 57.4% of the vote share so far.

“In Minnesota, we know that organized people will always beat organized money,” Omar wrote in a series of tweets Tuesday night. “Tonight, our movement didn’t just win. We earned a mandate for change. Despite outside efforts to defeat us, we once again broke turnout records. Despite the attacks, our support has only grown. This election isn’t about me. It’s about an agenda rooted in people’s everyday struggles—and the corporations and rightwing donors who are threatened by it.”

According to the Omar campaign, with 95.8% of votes in, the congresswoman increased her margin of victory by 9.15% over 2018, despite being outspent by 400%, with more than $6 million being spent to defeat her from primary challengers and conservative outside groups.

As of Tuesday, 644,420 absentee ballots have been requested, and 462,802 have been returned and accepted, according to the Minnesota Secretary of State’s office.

According to the Minneapolis Star Tribune, Melton-Meaux conceded to Omar at his campaign headquarters shortly after 10 p.m. ET. ABC News has reached out to his campaign, but a request for comment was not immediately returned.

Melton-Meaux, a Black lawyer and mediator, emerged as Omar’s most serious challenger. He has capitalized on the several controversies that have marred the congresswoman’s first term, including Omar’s criticism pertaining to the influence of pro-Israel donors and accusations of potential campaign finance violations.

In an interview with ABC News, Melton-Meaux previously described himself as a progressive who wants to address the “underlying systemic issues of racism,” the inequities in education, housing, health care and the economy, as well as to move toward reducing carbon footprint.

He asserted that his background uniquely positions him for the challenges of a polarized nation, depicting himself as a “bridge-builder.”

Omar, a Somali-American refugee, rose to the national spotlight when she became the first Muslim woman to be elected into Congress in 2018, along with Democratic Michigan Rep. Rashida Tlaib, who also win her primary last week in Michigan’s 13th Congressional District race.

Omar’s national profile gained further prominence as a member of “the squad” — an informal name for a four-member group of progressive freshman congresswomen: Reps. Alexandria Ocasio-Cortez, D-N.Y., Ayanna Pressley, D-Mass., and Tlaib, who have been popular targets of President Donald Trump and his allies.

The catch-22 of celebrity

While her national profile had turned Omar into a progressive firebrand, her opponent weaponized her celebrity status.

Melton-Meaux repeatedly critiqued Omar as disengaged from her constituents, more focused on achieving personal fame and national celebrity than on resolving the district’s problems.

Omar strongly rejected Melton-Meaux’s contentions, defending her record in Washington. The congresswoman previously told ABC News that “even in the face of death threats, I have made it my top priority to be in the community with Minnesotans and listen to them.”

Larry Jacobs, a professor of political science at the University of Minnesota, said that he expected Omar to face a tough fight, but he still expected her to “prevail” if turnout is in her favor because she is a progressive in a progressive district — who won by more than 70% in 2018 and has experience running campaigns, whereas Melton-Meaux is “new to politics.”

“All those things most of the time give you a win for the incumbent,” Jacobs told ABC News, but pointing to the controversies surrounding her campaign, added that the overarching storyline in this race is how did “someone who has all those things going in her favor end up in a dog fight?”

A representative from Omar’s campaign told ABC News on Monday that the team is “confident” ahead of the primary. “We campaign hard because elections are about more than just winning: They’re an opportunity to organize your community behind progressive change and get people more involved in our Democratic process,” he said.

“In the 5th [Congressional] District we believe in having marginalized voices be prioritized,” he added. “We believe everyone should have health care, a roof over their head, and a livable planet. And we believe that this congressional seat is one that belongs to the people and will remain with the people.”

Both Omar and Melton-Meaux have raised over $4 million in donations. The large majority of Omar’s fundraising comes from small individual donations.

Much of Melton-Meaux’s funds, however, have stemmed from large donors, and from pro-Israel political action committees, including $382,000 in donations bundled by the Pro-Israel America PAC. Another group, NORPAC, has raised over $105,000 for Omar’s challenger.

He stated that he does not feel these donations from PACs, which he describes as “nonpartisan organizations that have given to both Democrats and Republicans,” will sway any policy decisions.

Melton-Meaux used his influx in campaign donations to push his message across television airwaves, pledging in one of his advertisements that he would “be chasing cameras or selling books,” as he suggests Omar has.

Omar, however, hit back, stating in a new advertisement that Melton-Meaux is not a true progressive, and that “as a partner at one of the worst union-busting law firms in the country, Melton-Meaux defended corporations accused of mistreating workers and firing pregnant employees.”

Both candidates have gained a number of notable local and national endorsements. Last week, the Minneapolis Star Tribune put their support behind Melton-Meaux for his “strong progressive values,” and wrote that “while Omar wants to lead a movement, Melton-Meaux seeks to serve the 5th District.”

Minnesota has been the site of massive protests since the police killing of George Floyd in Minneapolis in May, and both Omar and Melton-Meaux have expressed support for the demonstrations.