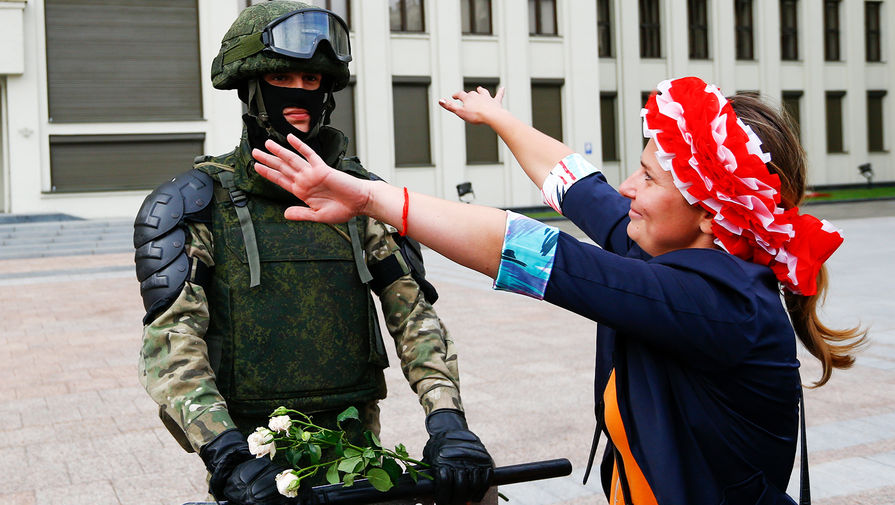 The protest movement in Belarus, it seems, has finally become popular. On the fifth day after the election to strike joined by more than a hundred businesses, as protesters marched in almost all major cities in the country. The rhetoric of the regime’s attitude became more conciliatory, and the opposition announced the launch of a political process.

On the fifth day after the presidential elections in Belarus strikes have become the main form of protest disagree with the voting results. For some time the work stopped about a hundred companies across the country, including the biggest: “BelAZ”, “Grodno Azot”, “Belarusian NPP” and even the Minsk metro.

The main events unfolded in the capital of the Republic. There is a strike of workers of the Minsk tractor plant (MTZ), turned into a March to the government House in Independence square. While the column of workers moved through the streets of the city, they were joined by ordinary citizens — young and old people of different views and professions.

When the column of protesters finally made it to Independence square, Riot police lowered the shields, thereby demonstrating a lack of intent to disperse a peaceful demonstration.

The actions of the security forces was met with thunderous applause, some girls from the number of protesters ran up to the police to have them to hug and give flowers.

Protesters shook the hands of security forces. After that, the protesters moved away from law enforcement for about 50 meters and began to applaud, shouting: “well Done!”

In addition to thanking the security forces for non-violence there also were other slogans: “Go away!”, addressed to the President of the country Alexander Lukashenko, or “Light — our President”. It’s about Svetlana Tikhanovski, which became the main opponent of the current government in this election, but according to official figures, Lukashenko conceded more than 4 million votes.

Unlike the previous days a peaceful protest and was not suppressed any arrests, the security forces have not performed. At 9 p.m. inspired by the events of the day the crowd began to disperse on residential districts of the capital.

The hallmark of protest in other cities was direct dialogue of disgruntled citizens with the local authorities.

The demonstrators and participants of the strikes came to the city administration, demanding from the authorities a call. The crowd listened, not all, but one of those who came out, was the mayor of the city of Grodno Mieczyslaw GOI. Protesters managed to make him promise in the near future to release all those detained during the protests of citizens.

Originated the trend of the dialogue with the city authorities tried to use Svetlana Tikhanovski. She called on mayors of cities in Belarus on August 15-16 to initiate peaceful Assembly. Belarusians she was encouraged to continue walking to the shares until their demands are fully met.

In addition, she announced the collection of signatures of those who voted for her election on August 9. But her main initiative was the establishment of a coordinating Council to ensure the transfer of power. “This Council may include representatives of civil society, respected and famous Belarusians, professionals”, — she explained.

Tikhanovski reported that the Republic’s authorities turned a peaceful solution to the citizens in the streets of the country into a “bloodbath”. According to her, Belarusians “never wants to live” with the former regime, as a large part of the population of the Republic of advocates for change.

Detailed comments relative what is happening on this day were given by the authorities.

In particular, Alexander Lukashenko was forced to start a meeting with a refutation of the rumors about his departure from the country. The head of state has predictably urged citizens “not to put out on the street.”

“Understand that you and our children used as cannon fodder! Today they come in large numbers here from Poland, Holland, Ukraine, with the open Russia, Bulk and so on and so forth. Is aggression began against the country. You want to, I sat and waited until the Minsk up upside down?” — said Lukashenko.

At the same time the head of state refused to consider that the situation in the country is “too uptight” or has a catastrophic. The President is confident that the protests run from abroad, and in the first rows of the columns are “people with a criminal record”.

But the loudest yesterday’s statement of the Belarusian President was an appeal to the leadership of law enforcement bodies with the request to find “the brake” in the suppression of the protests:

“Only, I ask the Minister and others, we still Slavs, if man is fallen and lies, it is not necessary to beat”.