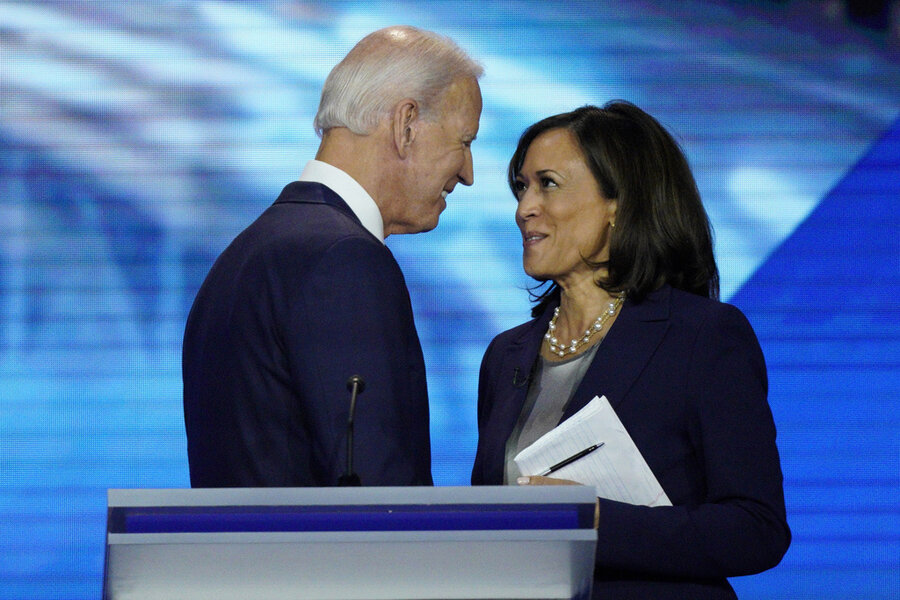 California Sen. Kamala Harris has spent a career shattering glass ceilings. On Tuesday, she made history as America’s first Black female presidential running mate on a major party ticket, joining former Vice President Joe Biden in the Democrats’ bid for the White House. Those who know the former prosecutor describe her as a smart, disciplined politician who relates well to voters, cares deeply about people, and is a prodigious fundraiser. On Twitter, Mr. Biden called her “a fearless fighter for the little guy.”

When asked to name her core attribute, friends and advisers invariably describe her as “tough” – “like a burning nuclear reactor,” as one former staffer put it.

The question is whether this quality is what Mr. Biden needs at this pivotal moment of deep national divide and economic and health crisis.

Many friends and supporters think so, including Lita Rosario, who has known Ms. Harris since they were students decades ago at Howard University. Back then, Ms. Rosario noticed how Kamala (pronounced comma-la) stuck to her guns in political discussions in the campus yard, wielding argument and logic like a rhetorical sword. Ms. Rosario recruited her to the college debate team.

“I don’t think Mike Pence has a chance,” she says of the expected vice presidential debate. Many Americans may remember Senator Harris’ prosecutorial questioning of then-U.S. Attorney General Jeff Sessions, during a Senate Intelligence Committee hearing in 2017. She grilled him on his dealings with Russia on behalf of the Trump campaign. “I am not able to be rushed this fast. It makes me nervous,” he told the senator.

“Kamala was, in some ways, bred in a lab for these tough confrontations – whether in a hearing or on a vice presidential debate stage. There is nobody better than her,” says another former staffer, who faults Democrats for often being too “civil” when democracy is at stake.

But the freshman senator does not have a long history of legislative coalition building, across the aisle or even within her own party. And to some observers, the senator’s intense ambition could be a possible threat to a President Biden, if her own political interests ever diverge from his.

Former Sen. Christopher Dodd of Connecticut, who led Mr. Biden’s vice presidential search committee, reportedly had grave misgivings about Ms. Harris’ lack of remorse over her surprise attack on Mr. Biden during a Democratic debate last June. He was said to favor Rep. Karen Bass of Los Angeles as a more loyal No. 2.

Robert Shrum, a former adviser to Mr. Biden who’s no longer in the consulting business, refutes the argument that there’s something wrong with being “smart and ambitious,” calling the criticism “sexist.” Lyndon Johnson was ambitious, he reminds.

In his view, Ms. Harris’ biggest problem during her own presidential campaign was that she couldn’t get her message straight. Now, the Biden camp will determine the message. “I don’t think she will go off and freelance,” he says. “That’s just not her style.”

The senator is a savvy politician who knows how to play to television cameras, can help redress 2016’s decline in Black turnout in Pennsylvania, Michigan, and Wisconsin, and would bring experience leading a large, statewide justice department to bear in a Biden administration, says Mr. Shrum, who leads the Center for the Political Future at the University of Southern California.

Despite having spent only four years in the Senate, Ms. Harris “knows how the levers of power are exercised,” says Nathan Barankin, who served as her chief of staff when she came to the Senate and, before that, as her chief deputy attorney general. Most of her career – as district attorney for San Francisco and as state attorney general – has been in executive positions, he points out.

She’ll be a particularly good governing partner for Mr. Biden, Mr. Barankin maintains, adding that her “affection for Joe Biden is deep and sincere,” the debate ambush notwithstanding. Except for her Senate swearing-in ceremony, where then-Vice President Biden pointed out that he’d lobbied (successfully) to get her on key committees like Homeland Security and Intelligence, their tenures in Washington did not overlap. But she got to know the former vice president through her friendship with his late son, Beau, when they were both attorneys general, fighting it out with the big banks in the mortgage crisis.

Senator Harris has repeatedly cited her mother, Shyamala Gopalan, as the most important influence in her life – a strong and courageous woman who left her native India to pursue graduate medical studies at the University of California at Berkeley. There, she met and fell in love with Donald Harris, who had immigrated from Jamaica to study economics. They married and were both active in the civil rights movement, taking Kamala, born in Oakland in 1964, in her stroller to marches.

After her parents divorced, it was her mother who raised her and her younger, sister Maya, who last year ran the senator’s presidential campaign. In her memoir, the senator describes her mother cooking dinner to the music of Aretha Franklin, while Kamala danced in the living room. They listened to Ms. Franklin’s version of “To Be Young, Gifted and Black” all the time.

“My mother understood very well that she was raising two black daughters … and she was determined to make sure we would grow into confident, proud black women,” writes Ms. Harris.

Political activism ran in her mother’s family. In India, the senator’s grandmother never attended high school, but was a community organizer who sheltered women who were abused by their husbands – and called the husbands and read them the riot act. Her grandfather was part of the movement for Indian independence and became a senior diplomat.

Ms. Harris’ mother pushed her and her sister “hard,” but also nurtured them and was a lot of fun, the senator writes. That, too, influenced her, friends say. She’s tough, but has “that sense of caring, that kind of motherly instinct,” says Ms. Rosario, who is now an entertainment attorney. While no longer in close contact with her college friend, the lawyer says the senator offered her comfort and encouragement after the loss of her mother in 2018.

“She said that she had gone through the same thing, and that those feelings of pain I had been feeling … would eventually turn to good things,” Ms. Rosario recalls. “I thought that was very poignant and true.”

The former Harris staffer who likened her to a nuclear reactor says that intensity burns in all aspects of her life, whether it’s work or relationships – or even cooking, another passion. She’ll express disappointment in work that doesn’t live up to her standards, but typically softens the criticism with a hug. She’ll call her friends on their birthdays and sing to them. She has been known to call into radio cooking shows with advice on how to brine a chicken. On the night that musician Prince died – she was a huge fan – she and her husband, Douglas Emhoff, danced for hours to his music in their backyard.

In her work, “she drills down into the human experience,” wanting to know what impact policies will have on individuals, says Mr. Barankin. That trait was evidenced in her effort to reduce recidivism in San Francisco, creating the Back on Track program for first-time, nonviolent drug offenders. It put them through job training and community service instead of in jail – a radical concept at the time.

Other aspects of her law enforcement record have come under heavy criticism, with many progressives accusing her of inaction on matters of police misconduct and police killings. How that might influence Black voters in this time of heightened awareness over policing is hard to say, though the senator is also a co-sponsor of police reform legislation that would bar chokeholds, racial profiling, and no-knock warrants.

California political analyst Phil Trounstine recently described Senator Harris as having “positions, not convictions,” calling her a “successful climber who has almost always done only what is best for herself at virtually every turn.” And yet, he says of all the candidates who were in the running to be Joe Biden’s Joe Biden, she is clearly the best choice.

“With the right seasoning – acting as No. 2, taking direction from the president and handling tasks given her – Harris could develop into someone who is a believable president. She’s the right age, demographic, and gender; she has a national following and reputation; she’s experienced and deft on the campaign trail, and she just might help boost the Black vote in Milwaukee, Detroit, Pittsburgh and Philadelphia.”